A study of Barnett Shale region water wells has found elevated levels of heavy metals near natural gas extraction sites, but a link to drilling/production activity has not been determined and may not be, researchers from the University of Texas at Arlington (UTA) said. 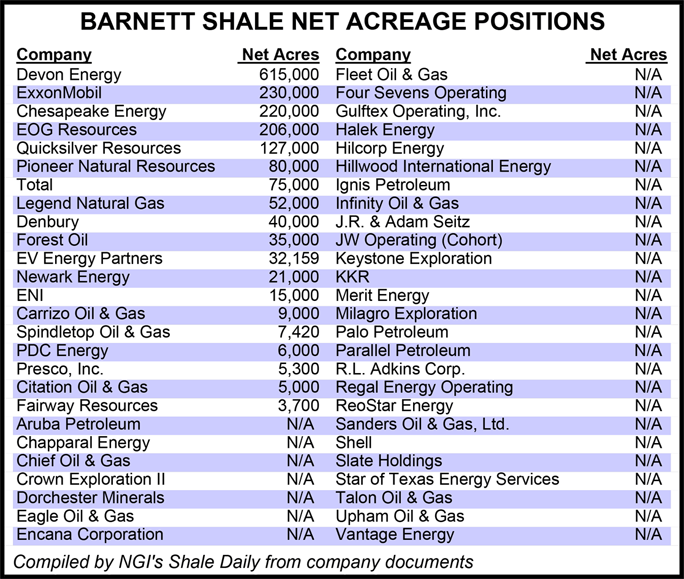 Findings from the study of 100 private water wells showed elevated levels of arsenic and selenium. Results were published online by the journal Environmental Science & TechnologyThursday. The peer-reviewed paper focuses on the presence of metals such as arsenic, barium, selenium and strontium in water samples.

“Many of these heavy metals occur naturally at low levels in groundwater, but disturbances from natural gas extraction activities could cause them to occur at elevated levels,” the researchers said.

“This study alone can’t conclusively identify the exact causes of elevated levels of contaminants in areas near natural gas drilling, but it does provide a powerful argument for continued research,” said Brian Fontenot, a UTA graduate with a doctorate in quantitative biology and lead author on the paper. “We expect this to be the first of multiple projects that will ultimately help the scientific community, the natural gas industry, and most importantly, the public, understand the effects of natural gas drilling on water quality.”

Researchers said the increased levels of the contaminants could be due to industrial accidents such as faulty gas well casings; mechanical vibrations from gas drilling activity disturbing particles in neglected water well equipment; or the lowering of water tables through drought or the removal of water used for the hydraulic fracturing process. “Any of these scenarios could release dangerous compounds into shallow groundwater,” they said.

The researchers, led by UT Arlington associate professor of chemistry and biochemistry Kevin Schug, gathered samples from private water wells of varying depth within a 13-county area in or near the Barnett Shale in North Texas over four months in the summer and fall of 2011. Ninety-one samples were drawn from “active extraction areas,” or areas that had one or more gas wells within a five-kilometer radius. Another nine samples were taken from sites either inside the Barnett Shale and more than 14 kilometers from a natural gas drilling site, or from sites outside the Barnett Shale altogether. The locations of those sites were referred to as “non-active/reference areas” in the study.

Researchers accepted no outside funding to ensure the integrity of the study. They compared the samples to historical data on water wells in the counties from the Texas Water Development Board groundwater database for 1989-1999, prior to the proliferation of natural gas drilling.

“Natural gas drilling is one of the most talked about issues in North Texas and throughout the country. This study was an opportunity for us to use our knowledge of chemistry and statistical analysis to put people’s concerns to the test and find out whether they would be backed by scientific data,” said Schug, who is also the Shimadzu Distinguished Professor of Analytical Chemistry in the UT Arlington College of Science.

On average, the investigation detected the highest levels of the contaminants within three kilometers of natural gas wells, including several samples that had arsenic and selenium above levels considered safe by the U.S. Environmental Protection Agency (EPA). For example, 29 wells that were within the study’s active natural gas drilling area exceeded the EPA’s Maximum Contaminant Limit of 10 micrograms per liter for arsenic, a potentially dangerous situation.

The areas lying outside of active drilling areas or outside the Barnett Shale did not show the same elevated levels for most of the metals. And the scientists said they did not find uniformity among the contamination in the natural gas drilling areas. In other words, not all gas well sites were associated with higher levels of the metals in well water.

Arsenic occurs naturally in the region’s water and was detected in 99 of the 100 samples. But the concentrations were significantly higher in the active extraction areas compared to non-extraction areas and historical data, the research found. The maximum concentration from an extraction area sample was 161 micrograms per liter, or 16 times the EPA’s safety standard set for drinking water.

Selenium was found in 10 samples near extraction sites, and all of those samples showed selenium levels were higher than the historical average. Two samples exceeded the standard for selenium set by the EPA.

Strontium was also found in almost all the samples, with concentrations significantly higher than historical levels in the areas of active gas extraction. Seventeen samples from the active extraction area and one from the non-active areas exceeded a recommended limit for exposure established by the federal government.

The paper also recommends further research on levels of methanol and ethanol in water wells. Twenty-nine private water wells in the study contained methanol, with the highest concentrations in the active extraction areas. Twelve samples, four of which were from the non-active extraction sites, contained measurable ethanol. Both ethanol and methanol can occur naturally or as a result of industrial contamination. Historical data on methanol and ethanol was not available, the researchers said in the paper.

The paper is called “An Evaluation of Water Quality in Private Drinking Water Wells Near Natural Gas Extraction Sites in the Barnett Shale Formation.”

Many members of the research team are now conducting well water sampling in the Permian Basin region in West Texas, establishing a baseline set of data prior to gas well drilling activities there. That baseline will be used for a direct comparison to samples that will be collected during and after upcoming natural gas extraction. The team hopes that these efforts will shed further light on the relationship between natural gas extraction and ground water quality.