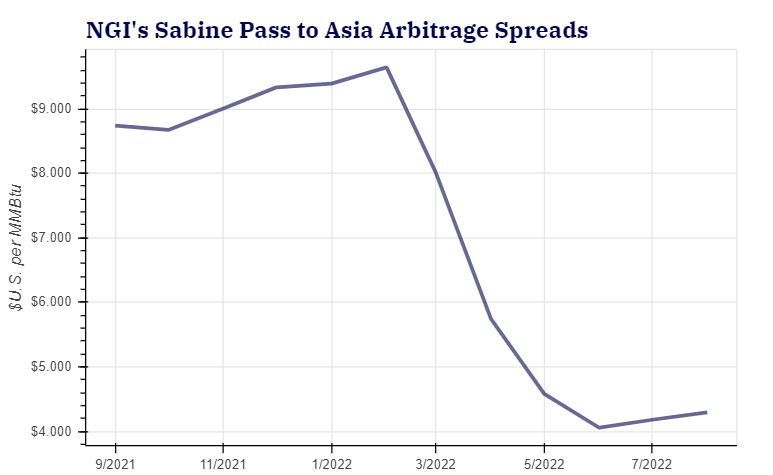 Gains for the Henry Hub contract led the way, as the U.S. benchmark traded near a three-year high Monday with the hottest weather of the summer in the United States on the way Tuesday.

Henry Hub picked up where it left off last week, when futures rose significantly. The seven contracts between August 2021 and February 2022 broke through resistance at $4.00/MMBtu last week, noted EBW Analytics Group. Weekly natural gas cash prices soared along with lofty temperatures and strong cooling demand throughout much of the Lower 48. NGI’s Weekly Spot Gas National Avg. for July 19-23 jumped 16.5 cents to $3.780.

Global LNG demand remains high, keeping Japan-Korea Marker (JKM) prices in Asia firmly in the mid-$14/MMBtu range and the Title Transfer Facility (TTF) benchmark in Europe above $12.  Given the spread between Asian and European prices, more American cargoes are headed for Asia.

“U.S. deliveries to both regions remain well in the money, though profit margins to Asia now sit an average of 98 cents/MMBtu over Europe in September and October,” Wood Mackenzie analysts said Friday. Asia has accounted for nearly 40% of all U.S. LNG cargoes this year, according to NGI data.

Asian demand remained strong Monday despite Typhoon In-Fa making landfall in eastern China over the weekend. Tens of thousands were evacuated amid heavy rainfall and high winds. Operations at two LNG import terminals in Shanghai and LNG truck deliveries from a terminal in Zhousan were reportedly disrupted. Supplies were also squeezed by the delay of six full LNG vessels due to the typhoon, according to market research firm Kpler.

Meanwhile, hot temperatures in Japan over the next week or so are expected to drive more electricity demand. Prices in Asia have pulled cargoes away from Europe. Wood Mackenzie said Friday that LNG deliveries to the continent were down by three cargoes week/week and are nine short of its short-term forecast.

European prices remained strong last week despite an announcement between the United States and Germany that will allow Russia’s Nord Stream 2 pipeline to be completed. Prices fell Friday after Nord Stream 1 started flowing again after maintenance, but quickly rebounded Monday.

TTF closed higher Monday as Norwegian imports declined and carbon prices moved higher. European storage inventories are also at 54% of capacity — the lowest they’ve been at this time over the last five years.

The European market will turn its attention to Ukraine’s auction for interruptible pipeline capacity on Tuesday. Russia’s Gazprom PJSC has elected not to take additional capacity to move more natural gas through Ukraine to Europe in each of the last three monthly auctions. The company has not participated in the auctions despite record high prices on the continent.