Weekly natural gas cash prices soared along with lofty temperatures and strong cooling demand throughout much of the Lower 48. NGI’s Weekly Spot Gas National Avg. for the July 19-23 period jumped 16.5 cents to $3.780. 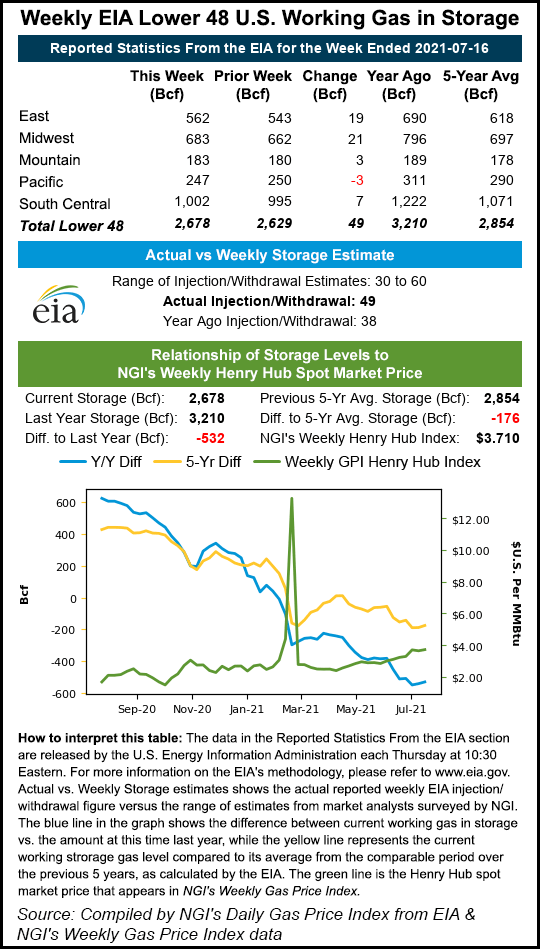 Hot high pressure created scorching conditions over much of the West and into the Plains, with highs of 90s and 100s throughout the week, boosting power needs and driving up prices.

Fueled by strong summer demand and expectations for more to come, the August Nymex contract rallied throughout the week as well and topped the $4.00 threshold for the first time since 2018 on Thursday. It did so again on Friday, settling at $4.060/MMBtu to close the trading week, up nearly 11% from the prior week’s finish.

U.S. gas markets have rallied on “spiking global prices due to tight supplies in Asia and Europe” as well as another expected hot weather pattern that could drive power burns in excess of 40 Bcf/d in coming days, NatGasWeather said.

The forecaster anticipates even stronger demand in the week ahead. It looked for the hot ridge over the west-central United States to expand eastward and cover most of the country with highs of 90s or above.

Natural gas futures fueled up early and rode a wave of momentum throughout the week.

Production hovered near 91 Bcf/d during the week, below the June highs of around 92-93 Bcf. Output is running shy of what many analysts think is needed to balance supply/demand following a June that was among the hottest in memory, with record daily highs set throughout the West. The intensity of heat has eased a bit in July, with rainy conditions in Texas and the South, but overall temperatures remain elevated and power demand is robust.

Analysts increasingly are expressing concern that, if output remains relatively low, stockpiles of gas needed for the winter could prove insufficient.

“Supply/demand balances remain tight, given where production sits at, and until this changes, it remains difficult to bet against additional rallying,” Bespoke Weather Services said.

Liquefied natural gas (LNG) send-outs to Europe, Asia and elsewhere along with pipeline exports to Mexico are “sharply higher” than in summer 2020, EBW Analytics Groups said.

“While year-over-year net exports ran 4.0 Bcf/d higher in April and May, the increase in net exports accelerated to 6.3 Bcf/d in June and 8.4 Bcf/d month-to-date in July,” the EBW team.  “Although the dramatic increase was telegraphed to the market in advance, the increase in LNG and pipeline exports to Mexico draws almost exclusively from the South Central region — placing upward pressure on Henry Hub.”

The print exceeded analysts’ median expectations and historic averages. Ahead of the report, major surveys foreshadowed a build in the mid-40s Bcf. NGI’s model predicted a 30 Bcf injection.

A year earlier, EIA recorded a 38 Bcf build, while the five-year average injection is 36 Bcf.

However, Bespoke noted, with summer cooling demand to carry through August and likely into September, storage levels could prove precariously light in coming months.

While the 49 Bcf build for last week was “not as tight as we were modeling, it is not enough to alter the narrative,” Bespoke said.

Spot gas prices advanced for the fourth time in the trading week on Friday, led higher by lofty temperatures and price increases throughout the nation’s midsection. NGI’s Spot Gas National Avg. picked up 2.0 cents on the day to $3.805 for weekend through Monday delivery.

High temperatures in the 90s galvanized air conditioner use from Minneapolis to Chicago to Dallas.

National demand was forecast to intensify early in the upcoming trading week as the hot ridge over the west-central United States moved eastward with highs of 90s to low 100s, impacting most of the country, besides 80s across the Great Lakes and Northeast, NatGasWeather said.

While cooler air could descend from Canada, heat was generally expected to persist into the first week of August, the firm added, with upper 80s to 100s across the West, Midwest, Plains and the southern United States.

Meanwhile, AccuWeather meteorologists warned Friday “a broad area of disturbed weather that was slowly spinning over the warm waters of the Gulf Stream just east of Florida and north of the Bahamas” had the potential to develop into a tropical depression by Monday.

If it does become a tropical storm, it would get the next name on the list of tropical storms for the 2021 Atlantic hurricane season, Fred, AccuWeather noted. There have been five named systems so far this year over the Atlantic.