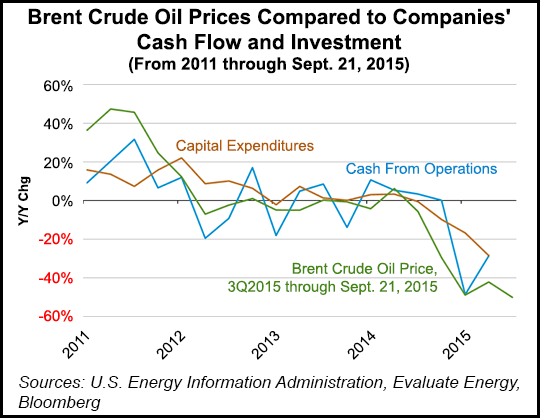 EIA analysts found that during 2Q2015, liquids production — which includes crude oil and hydrocarbon gas liquids — was 7% higher than the previous second quarter among leading world producers, while natural gas production was flat between the two quarters. Both trends occurred while crude oil prices rose from 1Q2015 to 2Q2015, but were still “well below” prices from 2Q2014. Operating cash flow also increased $26 billion between 1Q2015 and 2Q2015.

But while EIA found the companies had reduced their capex budgets by $38 billion in 2Q2015 (to about $95 billion) compared to the preceding second quarter (about $130 billion), “the difference between cash from operations and capex was almost zero in 2Q2015,” with both in the neighborhood of $90 billion and a Brent crude oil price just north of $60/bbl.

The agency added, however, that on an annualized basis “the energy companies still have a wide deficit of operating cash to capex,” with the former totaling about $420 billion and the latter about $470 billion. “This operating deficit continues to be funded from asset sales, debt issuance and equity issuance.

“Both sectors had the highest debt-to-equity ratios since 2010 in the second quarter,” EIA said. Long-term debt-to-equity for energy companies is currently about 43%, while for manufacturers it is about 54%.

EIA reported that Brent crude prices had declined by nearly 50% year-over-year (y/y) through Sept. 21, while cash from operations and capex spending were both down about 30% y/y in 2Q2015. Should Brent crude oil prices continue to decline into 3Q2015, that would “likely pressure companies’ cash flow and investment,” EIA said.