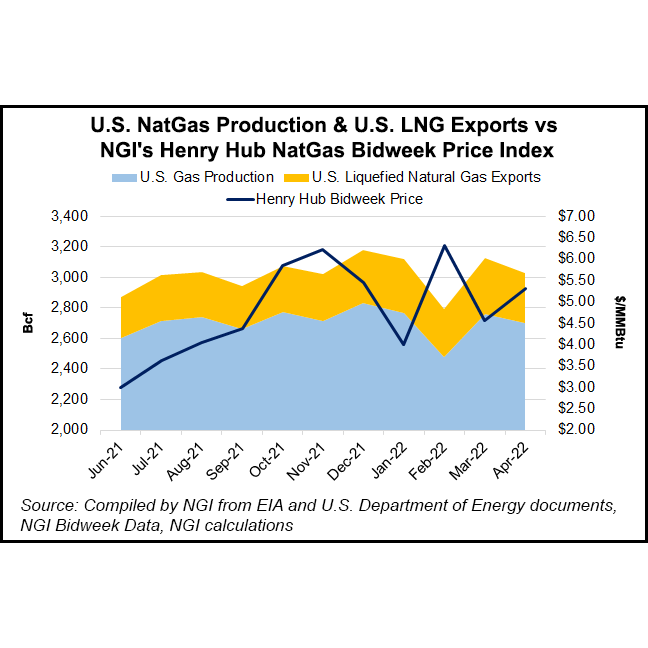 “I don’t think we should be exporting any more LNG than we are today if we’re not going to, conversely, produce more on the supply side,” CEO Peter Huntsman said. He cited the aftermath of the Freeport LNG explosion early this month as “real-time market evidence” of the need to produce more gas domestically.

After Freeport LNG Development LP said the export facility would be offline for a longer period than initially expected, gas prices dropped because domestic supply is increasing as a result, Huntsman explained. More supply available to U.S. consumers lowers gas prices, he said.

The global petrochemicals industry is grappling with the past year’s sharp overall rise in natural gas prices on multiple fronts, Huntsman said.

In addition to relying largely on natural gas-fired power, the industry uses natural gas liquids (NGL) for raw materials, according to the American Chemistry Council (ACC).

ACC’s Martha Moore, managing director for economics and statistics, told NGI that more than two-thirds of the total energy the chemical industry consumes, both in fuel and feedstock, is derived from natural gas and NGL production.

The industry in 2020 used nearly 2.7 Tcf of natural gas, or 8% of total U.S. production, she said. It also consumed 2.2 quadrillion Btu of NGL and liquefied petroleum gas, primarily sourced from natural gas processors, for feedstocks, she added.

“About three-quarters of the industry’s natural gas consumption was used for fuel and power, with the remaining quarter used as feedstock,” Moore said.

Huntsman pointed out the higher raw materials costs “will put a tremendous amount of inflationary pressure on our pricing. It makes us globally less competitive, and it means that we’re chewing up more money in raw materials and not in research and development.”

“And so when that inflationary bubble goes in, it ultimately hits the consumers as it is right now.”

Huntsman had predicted in early June that the inflationary impact would get worse because chemical manufacturers were in the process of buying “most of the gas that we consume” in the winter. In addition to higher costs to produce chemicals, increased costs for inputs such as fertilizer, utilities, and transportation ultimately are passed along to the consumer, he said.

“So all of this whole wave of inflationary prices increases, it’s working its way through the system,” Huntsman said. “Most of it has not yet even reached the consumer.”

NGLs are the predominant feedstocks at petrochemicals plants in North America and the Middle East. In Europe and Asia, meanwhile, naphtha – an oil-based refinery product – is most common.

A Benefit From Freeport?

“This has decreased demand domestically” and has led to lower Henry Hub natural gas pricing, he said. “Once the facility comes back online we will have to monitor the demand versus natural gas in storage to determine one of the factors for price.”

Schwartz said the other key figure to watch is “European demand in light of the Russian invasion of Ukraine, which has a demand pull on global pricing for natural gas. If this becomes settled over the next year there may be a different outlook for LNG demand.”

Some countries in Europe have become more receptive to producing more oil and gas at home.

To be sure, Schwartz stressed that forward prices for natural gas – like those for NGL and crude oil – are significantly backwardated, “meaning that the markets believe future supply and demand will be different than it is today.”

Regarding the concern that expanding LNG exports would threaten the U.S. petrochemicals industry’s competitiveness, Schwartz said it “is likely to be overdone” as domestic oil production with associated gas continues to grow.

With Permian Basin oil output advancing toward 6 million b/d, “the associated gas and new pipelines to deliver it” will keep growing.

“This will have a moderating effect on domestic petrochemical plants’ gas pricing,” Schwartz added.

The lack of sufficient natural gas takeaway in the Northeast, home of the Marcellus and Utica shales, is “inhibiting production growth and delivery to markets.” He said it was instructive to weigh the relative values of crude oil and liquid feedstocks compared to using NGL feedstocks.

“Globally, the oil-based feedstocks continue to be disadvantaged to U.S. NGLs, leaving an advantage to these domestic petrochemical producers.”

Exploration and production companies across the Lower 48 have been whittling down their storehouse of drilled but uncompleted wells. Baker Hughes Co. (BKR) has also observed a 60% year/year jump in the number of U.S. oil- and gas-directed drilling rigs.

Further down the value chain, projects to expand Gulf Coast LNG export capacity have reached important milestones recently. In one case, Cheniere Energy Inc. has sanctioned the addition of seven liquefaction trains at its Corpus Christi facility in South Texas.