Representatives with the liquefied natural gas (LNG) facility in Texas that suffered an explosion last week, Freeport LNG, said early Tuesday that the company does not expect the export facility to be fully repaired for months. 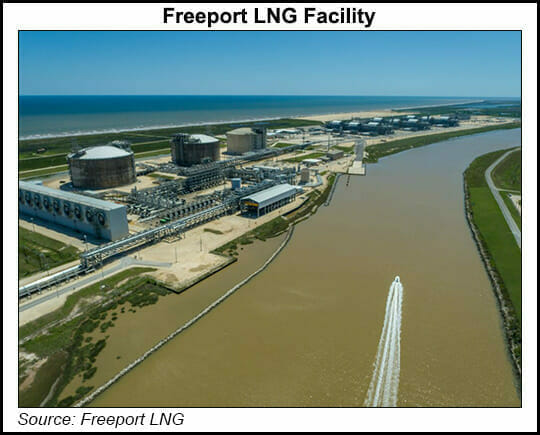 The company is now targeting late 2022 for a return to full service instead of the initial guidance of three weeks. Given that the explosion and fire that knocked the plant offline were contained to a small area, partial operations could begin in 90 days, said Freeport LNG Development LP. The announcement sent U.S. natural gas futures tumbling.

The July New York Mercantile Exchange gas futures contract plunged by $1.42 to close at $7.189/MMBtu on Tuesday. It hit an intraday low of $7.008. The European benchmark Title Transfer Facility prompt contract surged more than $4 to finish Tuesday near $30.

An explosion last Wednesday at the terminal left market participants contemplating potential demand destruction of 2.0 Bcf/d through at least June. The much longer repair period could free up gas for domestic use and ease a feared supply crunch that had sent U.S. futures to a 14-year high this spring. Meanwhile, competition for LNG cargoes is poised to heat up between Asia and Europe given the potential lack of supplies through year’s end.

“At this time, completion of all necessary repairs and a return to full plant operations is not expected until late 2022,” Freeport stated. A “resumption of partial operations is targeted to be achieved in approximately 90 days, once the safety and security of doing so can be assured, and all regulatory clearances are obtained.”

The cause of the accident remains unclear and an investigation is underway. The company said Tuesday the incident occurred in pipe racks that support the transfer of LNG from the facility’s LNG storage tank area to the dock facilities. None of the liquefaction trains, LNG storage tanks, marine facilities or LNG process areas were impacted, the company said.

Preliminary observations suggest the incident resulted from the overpressure and rupture of a segment of an LNG transfer line, “leading to the rapid flashing of LNG and the release and ignition of the natural gas vapor cloud,” Freeport said.

The vapor cloud was contained within the facility’s fence line, the company said. The explosion lasted about 10 seconds. The fire and smoke that followed the blast were from materials that burned where it occurred, including pipeline insulation and cabling. The fire was extinguished in 40 minutes. No injuries were reported.

The facility on Quintana Island, about 65 miles southeast of Houston, is among the largest LNG export terminals in the world. It had been running at full capacity prior to the incident.

A prolonged outage is likely to have the biggest impact on Europe, which has accounted for about three-quarters of all U.S. LNG exports this year. The continent is working to refill depleted storage inventories and diversify its supplies in a shift away from Russia following the invasion of Ukraine.

Making matters worse for Europe, problems at a compressor station have cut flows on the Nord Stream 1 (NS1) pipeline, which delivers volumes to Germany. Maintenance has been delayed because of sanctions against Russia, which has stranded equipment abroad. Gazprom PJSC said Tuesday the problems have limited capacity on NS1 by 40% to 100 million cubic meters/day.

Energy Aspects said Tuesday it expects the Freeport outage to cut 6 billion cubic meters (Bcm), or about 212 Bcf, from global LNG balances. The NS1 issues may cut another 1 Bcm, or 35 Bcf, from European supplies, it said. That would put the continent on track to miss its target of filling underground storage to 85% of capacity by October, said analyst Leon Izbicki.

To compensate for the lost supply, “TTF will have to price above the traditional coal-to-gas fuel switching range in an effort to trigger incremental industrial demand destruction and compete for more spot LNG cargoes,” Izbicki told NGI.

Asian spot LNG prices have been slow to react to the outage as China’s demand has remained tepid on pandemic-related restrictions. Higher prices have also sidelined some buyers, and others have switched to alternative fuels.

While the outage is expected to have a more severe impact on Europe, Asian buyers are likely to have more difficulty securing spot supplies in a tight market the longer the outage drags on, traders said.

“China, which has been absent, will now be thinking how to get ahead of this to cover the winter heating demand season,” said Trident LNG’s Toby Copson, global head of LNG trading in Shanghai. “Couple that with Korea and Japan, who are already tight for summer, and this is going to be very volatile.”

Both Japan and South Korea have also indicated they plan to step up efforts to secure more supplies ahead of the winter heating season. Freeport has long-term supply contracts with buyers in Japan and South Korea, along with a trading house and major portfolio players that serve demand across the globe. The plant has supplied up to five cargoes each week.

“The long-term contract holders will be having an all hands on deck meeting,” Copson told NGI. “With the delay in repairs far exceeding the initial three weeks estimate, this takes that volume out into the winter months, and they absolutely will be fiercely competing with Europe.”

The 2.0 Bcf/d that would have been consumed by Freeport is set to stay in the domestic market through at least the end of summer. U.S. storage inventories are likely to improve as a result and open the door “for more downside potential in prices,” said Schneider Electric analyst Christin Kelley.

Stocks most recently were 340 Bcf below the five-year average, which has been supporting Henry Hub prices.

Schneider Electric still expects U.S. inventories to start winter at a deficit to the five-year average. However, Kelley said the firm now estimates that deficit to be nearly half of what was expected before the Freeport outage.

“There are still a lot of unknowns left for the remainder of summer though,” Kelley told NGI. “If we get record-setting heat in July and August like we’re seeing this month, that could still open the door for tighter markets again. We’ll also look to see what hurricane season brings this year.

“Additional LNG outages would be bearish, but if we see something similar to Hurricane Ida last year, where some production was offline for an extended period, that would add bullish support.”

RBN Energy LLC analyst Sheetal Nasta said Gulf Coast gas production is likely to be stranded in Texas and North Louisiana as the outage stretches on. There is a limited amount of takeaway capacity to move it elsewhere, she told NGI.

“The storage deficit to last year is about 400 Bcf right now, so that would go a long way toward wiping out that deficit before the coldest months of next winter arrive,” she said.

Nasta also pointed to the potential impacts of the Atlantic hurricane season, which began June 1 and runs through November. There also is an annual Cove Point LNG maintenance outage, which typically starts in the fall.

“So, bottom line, the scenarios overall got much more bearish than they were before the outage,” Nasta said of the U.S. market.

Jamison Cocklin and Jacob Dick contributed to this story