Forest Oil Corp. has struck an agreement with Schlumberger that the company said will allow it to accelerate development of its Eagle Ford Shale acreage. 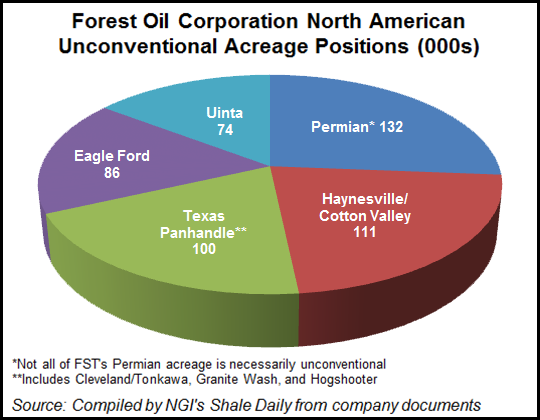 Schlumberger is to pay a $90 million drilling carry in the form of future drilling and completion services and related development capital in order to earn a 50% working interest in Forest’s Eagle Ford acreage. The deal supports Forest’s plans to accelerate development by increasing drilling activity to four rigs, from one to two rigs currently, by the end of the third quarter. Forest said the capital carry amount and the accelerated development should bring forward $250 million in PV10 economics.

The accelerated program is expected to hold an aggregate of 55,000 gross (27,500 net) acres in Gonzales County, compared to 40,000 gross (40,000 net) acres based on the current program. The increased acreage position has 688 gross (344 net) locations identified based on 80-acre spacing, and Forest anticipates being able to drill 80 gross (40 net) wells per year beginning in 2014. Based on Forest’s current estimated ultimate recovery of 300 million boe per location, the Eagle Ford acreage contains a potential gross un-risked resource of more than 200 million boe (100 million boe net).

“Schlumberger Production Management will provide the technology, integrated services and capital resources necessary for us to retain and develop a substantial portion of our acreage position,” said Forest CEO Patrick McDonald. “The development agreement allows for accelerated production growth and enhancement of our project economics as we integrate leading-edge technologies across all aspects of our Eagle Ford development program.

The agreement applies to wells spud on or subsequent to Nov. 28, 2012, none of which had been placed on production prior to April 1, 2013, and Forest will retain all of its interests in wells and production that have been spud prior to Nov. 28, 2012. Forest will be the operator of the drilling program and currently expects that the drilling carry will be fully realized by the end of 2014.

“We are pleased to be part of this exciting opportunity, in which Forest and Schlumberger are fully aligned and committed to the development of Forest’s Eagle Ford unconventional resources,” said Carl Trowell, president of Schlumberger Production Management. “Our primary goal will be to support and complement Forest’s current team, and to develop and deploy industry-leading technologies; develop the best unconventional resource workflows; and implement new reservoir management techniques in order to maximize production and reserves.”

Wells Fargo Securities said the deal is a “positive” for Forest as the company “gives up only 12,500 acres but essentially no reserves or existing production, but brings in the door $90 million. Besides the straight deal metrics, from our perspective, [it is] also important that the new management team [see Shale Daily, Sept. 13, 2012] continues to execute ad deliver on the strategic plan.”

Forest said its share of spending for the accelerated plan for 2013 and 2014 will total $125 million and $220 million, respectively. The plan will result in 10 and 20 additional net wells being drilled in 2013 and 2014, respectively. This year’s additional net wells are primarily scheduled to be online later in the year and thus will not materially change average net sales volumes for 2013.

However, average net sales volumes from the Eagle Ford are expected to more than double from an average of 2,800 boe/d in 2013 to 6,500 boe/d during 2014 as the benefits from a full year of the accelerated development program are realized, Forest said. The Eagle Ford program is expected to generate lease level income of 68% and 80% of the total net capital expenditures for 2013 and 2014, respectively, Forest said.