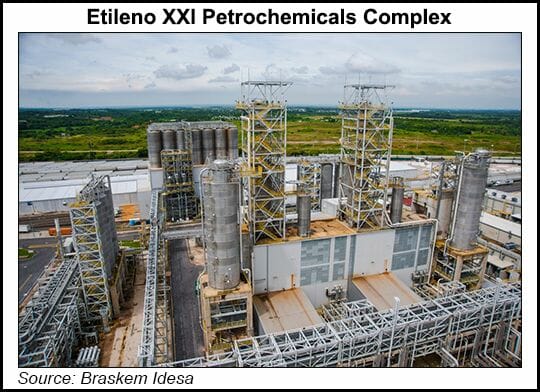 “This event highlighted the ongoing disputes between Braskem Idesa and the Mexican government, which has indicated its desire to cancel and/or renegotiate the ethane contract Braskem Idesa has with” Mexican state oil company Petróleos Mexicanos (Pemex), the Fitch team said.

Amid its own declining production of wet natural gas in southeastern Mexico, Pemex has struggled to meet its ethane supply commitment to the plant under a 20-year, take-or-pay/supply-or-pay deal for 66,000 b/d signed in 2010.

Over the last nine months, Pemex was only able to supply about 48,000 b/d on average, the Fitch team said. Additionally, Pemex had accrued a balance of $64 million in unpaid credit notes to Braskem Idesa as of September 30 in damages for supplying ethane at below the contractually established volumes.

To make up for the supply shortfall, Braskem Idesa in February began a fast track project to import ethane from the United States, “which is expected to ramp-up, allowing imported ethane to reach up to 16,000 b/d by 2021 (out of 25,000 b/d of capacity), or 38% of total needs,” the Fitch team said.

Mexico’s president Andrés Manuel López Obrador has said publicly that Cenagas cut off the plant’s natural gas transport service because the ethane contract with Pemex was not being “corrected.”

Braskem Idesa, a joint-venture between Brazilian petrochemicals giant Braskem SA and Mexico’s Grupo Idesa, said it was told by Cenagas on November 30 that the transport services gas would not be renewed, and that Cenagas blocked the entry of gas the following day.

This was “in breach of the intermittent base contract in force and without taking into account Braskem Idesa’s request to maintain 48 hours of reduced supply to stop its operations in a safe manner for people, neighbors and the environment,” the firm said.

Braskem Idesa added that the actions of Cenagas “have caused the total suspension of the plant’s processes, with the consequent and negative repercussions not only for us, the plant, our customers, suppliers and employees, but also for the hundreds of businesses that depend on this supply chain affecting the national petrochemical industry and the economy as a whole.”

In a recent column for NGI’s Mexico GPI, Gadex consultancy founder Eduardo Prud’homme said the abrupt non-renewal by Cenagas of the Etileno XXI contract “raises questions about the technical and operational independence of Cenagas as a guarantor of open access obliged not to discriminate against its users.”

The Etileno XXI plant includes an ethane cracker with capacity to produce 1.05 million tons/year of high and low density polyethylene, with natural gas used as both an energy source and a feedstock in the process.

Ethane, a natural gas liquid that is separated at natural gas processing plants, is converted to ethylene through the cracking process.

“Pemex’s marked production declines have made it difficult for it to fulfill its ethane supply commitments under this contract, which has resulted in Braskem Idesa operating below expected capacity and Pemex incurring liquidated damages payment obligations to Braskem Idesa,” the Fitch team said.

“The one-notch downgrade reflects Fitch’s base case expectation that the company will be able to find alternative fuel sources that will allow it to resume operation but at a lower capacity utilization level and with a higher cost structure,” Fitch analysts said.

The downgrade “also reflects heightened risk that the company will need to renegotiate its ethane supply agreement with Pemex with less favorable terms.”

They also noted, “Braskem Idesa heavily depends on government entities that provide not only transportation of natural gas, but ethane from Pemex and alternative sources of electric power, which are all essential to the viability of its operations.”

Analysts said that under the Etileno XXI project finance terms, Braskem Idesa has a put option against Pemex that would require Pemex, in the case of default on its contractual obligations, to assume Braskem Idesa’s debt and remunerate its shareholders for their invested capital, the Fitch team said.

The analysts said Fitch will evaluate Braskem Idesa’s rating watch negative status after the facility’s restart “to determine if the new output levels and cost structure provide a sufficient level of cash flow relative to debt service to maintain the ‘B-’ rating.”

They warned, however, “A failure to resume operations in the near future would likely lead to a multi-notch downgrade.”