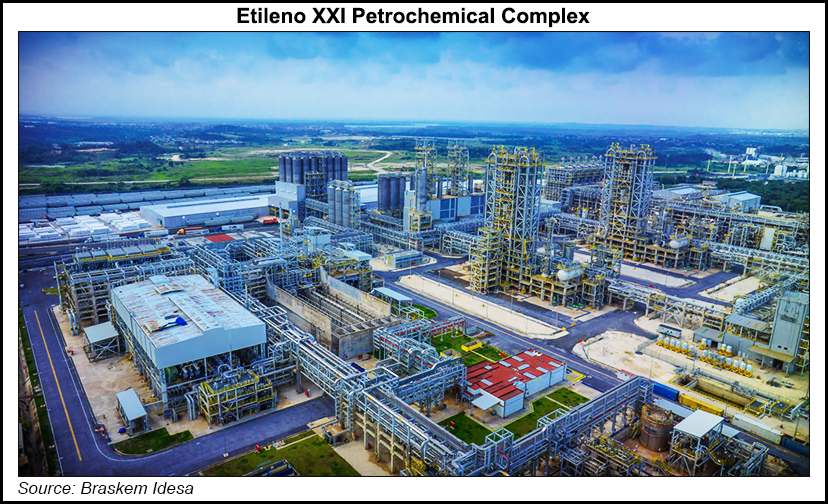 Cenagas is the state entity tasked with coordinating operations and allocating capacity on the Sistrangas natural gas pipeline network.

Etileno XXI, the largest petrochemical complex in Latin America, is owned by Braskem Idesa, a joint-venture between Braskem and Mexico’s Grupo Idesa.

Braskem said it received notification from Cenagas “related to the unilateral termination of the service of natural gas transportation, an essential energy input for the production of polyethylene” at the complex.

“As a result, in compliance with safety protocols, Braskem Idesa initiated procedures for the immediate interruption of its operating activities, which may have a material effect on the company’s operating or financial results, depending on the timing of the stoppage,” the company said.

The firm added, “Braskem Idesa will take applicable legal measures to protect its rights and find a solution for the issue, and it cannot estimate, at this time, the date for the return of its activities.”

Braskem Idesa has been a favorite target of Mexican president Andrés Manuel López Obrador, who contends that Pemex got a raw deal in a separate contract signed in 2010 to supply 66,000 b/d of ethane to the complex under a 20-year, take-or-pay/supply-or-pay contract.

Pemex has struggled in recent years to meet the commitment due to its own declining natural gas production. Braskem CFO Pedro Freitas said in a 3Q2020 earnings conference call that Pemex has been supplying about 70% of the contractually required ethane volumes in recent quarters.

Braskem also said it is owed $65 million so far in receivables and unpaid credit notes from Pemex as payment for liquidated damages for the supply shortfall.

Freitas said that talks with Pemex about the ethane contract were ongoing, but that no agreement had been reached to amend it.

Braskem Idesa’s polyethylene utilization rate was 84% during 3Q2020, with ethane imports from the United States averaging 8,000 b/d to supplement ethane supplies from Pemex. Braskem Idesa is in the midst of expanding its ethane import capacity in Mexico, with the goal of increasing imports to more than 20,000 b/d.

During his morning press conference Wednesday, Mexican President Andrés Manuel López Obrador said he’d been informed of the termination by Cenagas of natural gas transport service for the complex, which he said occurred “because the unfair [ethane] contract is not being corrected…” He added, “Therefore, there is no longer natural gas for the company because the [natural gas] contract expired. It wasn’t interrupted, but rather it reached its end date and will not be renewed.”

Based on available information, the move by Cenagas appears to be “completely illegal” or “at least it’s not complying with the regulations,” Gadex energy consultancy founder Eduardo Prud’homme told NGI’s Mexico GPI.

In theory, Braskem should be able to go to energy regulator Comisión Reguladora de Energía (CRE) and say that Cenagas is violating the rules, Prud’homme said.

However, this would likely have little effect due to the politicization of CRE under the current government, he said.

“So it’s the worst of the scenarios,” Prud’homme said, adding, “We are seeing an extortion scenario.”

IHS Markit’s Adrian Calcáneo, natural gas liquids (NGL) lead for Latin America and the Caribbean, expressed a similar view on Twitter, writing, “The government of Mexico is using its muscle to balance a negotiation where its legal arguments are unfavorable.”