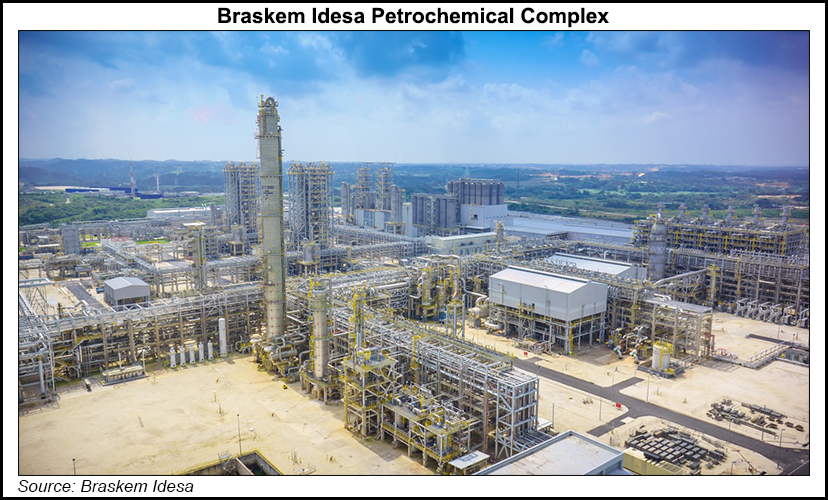 Natural gas supply is once again at the heart of a contractual dispute between Mexico’s government and the private sector, with President Andrés Manuel López Obrador’s sights now trained on the Etileno XXI petrochemicals plant owned by Braskem Idesa in Veracruz state.

López Obrador said Monday the terms under which state oil company Petróleos Mexicanos (Pemex) supplies ethane to the plant are “leonine,” or unfair. He argued that the contract authorized under former President Enrique Peña Nieto “must be canceled, it’s my opinion, for being a leonine contract, it must be revised,” and that the government must “recover what was obtained in an illegal manner…”

The term leonine might be unfamiliar to those who do not follow López Obrador’s daily morning press briefings.

Some of the contracts are still in negotiations.

Ethane is used as feedstock to produce petrochemical precursors such as ethylene and polyethylene.

Braskem Idesa, a 75/25 joint venture between Brazilian petrochemicals giant Braskem and Mexico’s Grupo Idesa, was created in 2010 to build and operate the 1.05 million ton/y ethane cracker.

Braskem, for its part, is a joint venture with voting stakes held by Odebrecht SA (50.1%), Brazilian state oil company Petróleo Brasileiro SA, aka Petrobras (47%), and others (2.9%).

Odebrecht has been the subject of multiple corruption probes throughout Latin America, and was a central player in Brazil’s infamous Lava Jato, or Car Wash, graft scandal.

The Etileno XXI project, which required $5.2 billion of investment, was backed by a 20-year ethane supply contract from Pemex, and achieved first production in 2016.

As a result, the country has become increasingly dependent on gas imports from the United States to meet growing demand.

López Obrador also has alleged that Odebrecht bribed legislators to pass Mexico’s landmark 2013-2014 constitutional energy reform, which opened up the state-dominated sector to competition from the private sector.

In a lengthy letter to NGI’s Mexico GPI, Braskem Idesa spokesman Armando Vera rejected the characterization of the contract as unfair, and denied all accusations of wrongdoing.

He said, “we have no information or evidence with respect to the insidious declaration around the existence of irregular payments linked to” the ethane contract. “The ethane supply contract between Braskem Idesa and Pemex was the product of an international, public tender in which 30 local and international companies participated.” Braskem Idesa won by offering the proposal with “technical and economic conditions considered positive for Pemex.”

What’s more, he said, Mexico’s Superior Auditor of the Federation concluded in a 2016 report that there were no irregularities in the tender process.

Vera also highlighted that the tender was conducted during 2008 and 2009, three to four years before the alleged wrongdoing in Mexico by Odebrecht and Lozoya.

Additionally, he said, when Odebrecht and Braskem agreed to a $3.5 billion plea deal with the U.S. Department of Justice in relation to bribery charges in the United States, Brazil and Switzerland, the agreements mentioned no acts of corruption in Mexico by either firm.

“Braskem and Braskem Idesa have conducted exhaustive internal investigation processes, with independent attorneys, which concluded there was no inappropriate activity or link to these acts with…Odebrecht in Mexico,” Vera said.

The pricing formula proposed by Pemex and accepted by Braskem Idesa for the take or pay/deliver or pay ethane contract, meanwhile, was approved by Mexico’s Comisión Reguladora de Energía (CRE), Vera said.

In its second quarter earnings presentation, Braskem said 13% of Etileno XXI’s feedstock needs were met via imports during the period because of a lack of available domestic supply.

“Braskem Idesa is working constantly with its provider in the search for solutions to the insufficient production of ethane in Mexico that harms the entire petrochemical industry in the country, and is willing even to make investments to develop an ethane import terminal, which is the only solution for this situation,” Vera said.