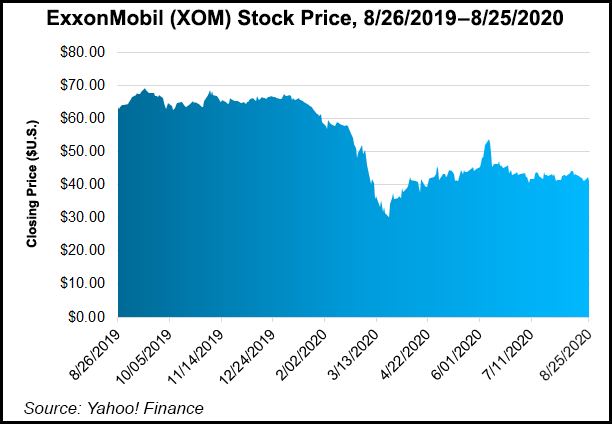 ExxonMobil is to be replaced on the Dow Jones Industrial Average effective Monday (Aug. 31) in a shakeup prompted by Apple Inc.’s decision to split its stock.

The price-weighted, 30-stock, blue chip index said Salesforce.com would replace the Irving, TX-based supermajor. ExxonMobil has traded on the Dow since 1928. As recently as 2011, ExxonMobil was the world’s largest company. During 2Q2020, however, a global oil supply glut and scant demand resulting from Covid-19 pushed ExxonMobil to a historic loss, with nearly every corner of its operations slammed.

The shuffle resulted from Apple’s decision to split its stock 4:1, which would reduce the index weight in the Global Industry Classification Standard Information Technology sector. The changes help offset the reduction, officials said.

Apple, which joined the Dow in 2015, now represents about 12% of the price-weighted index.

The changes “also help diversify the index by removing overlap between companies of similar scope and adding new types of businesses that better reflect the American economy,” Dow officials said.

Tudor, Pickering, Holt & Co. (TPH) rates ExxonMobil as a “hold” because of its “expanding leverage to finance the dividend and pressure in key segments like refining.”

However, said analysts, “this is another blow to sentiment toward a sector that has been under intense selling pressure while losing relevance with the investment community over the past six years.”

“Eventually we suspect as stocks continue to languish and strip continues to improve value investors will return, but they are looking for free cash flow yields of 10-15% with all excess cash flow returned in the form of dividends and buybacks. If the industry strays from this game plan, we fear cash flows and equity prices will continue to derate as enticing investors to the space will be a tough proposition.”

The changes for the Dow came one day after Norwegian life insurer Storebrand ASA said it is exiting some oil and gas coverage, including for ExxonMobil and Chevron Corp., to improve its climate policy and divest from fossil fuel investments.