A global oil supply glut and scant demand resulting from Covid-19 pushed ExxonMobil to a historic loss in the second quarter, with nearly every corner of its operations slammed. 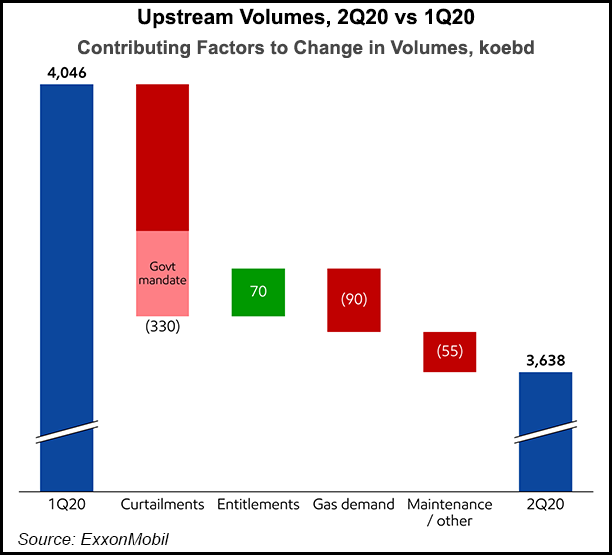 The quarterly loss of $1.1 billion (minus 26 cents/share) was the deepest in history as transportation and petrochemical demand reversed. During 2Q2019, profits were $3.1 billion (73 cents).

Supply is expected to exceed demand for months, “and we anticipate it will be well into 2021 before the overhang is cleared and we returned to pre-pandemic levels,” Senior Vice President Neil Chapman said Friday during a conference call.

“Simply put, the demand destruction in the second quarter was unprecedented in the history of modern oil markets. To put it in context, absolute demand fell to levels we haven’t seen in nearly 20 years. We’ve never seen a decline with this magnitude and pace before, even relative to the historic periods of demand volatility following the global financial crisis and as far back as the 1970s oil and energy crisis.”

Production was 3.6 million boe/d, down 7% year/year, with a 3% decrease in liquids and a 12% decline in natural gas, reflecting the impacts of the coronavirus on global demand.

North American production shut-ins peaked at more than 2 million b/d in the quarter, forcing the No. 1 operator to pull in the reins across the Lower 48 and Canada unconventional plays, which include the Permian Basin, Bakken Shale and Western Canada heavy oil.

“We brought the majority of production from our shorter-cycle unconventional plays back online in July as market conditions recovered,” he said. “Looking ahead to the third quarter, we anticipate an impact of approximately 200,000 boe/d from curtailments,” with about 70% of those mandated by government entities.

“Within the quarter, April marked a low point with the results improving through May and June,” investor relations chief Stephen Littleton said during the call. “However, it’s worth noting that refining margins remain very challenged, notably in North America, with record high product inventories.”

Still, stronger output is coming, Chapman said, “despite the curtailments and the sharp reduction in capital expenditure — and it is still more than 70,000 boe/d above the full-year 2019.”

Even so, ExxonMobil’s Permian rig count is to be sharply lower than it was a year ago. The company had more than 50 rigs running across its Texas-New Mexico stronghold as of last fall. At the end of June it was down to 30, “and we expect to cut that number by at least half again by the end of this year,” Chapman said.

“The decision to reduce activity reflects our focus on making the appropriate decisions to maximize the value of each well and adapt as market conditions become more favorable including to optimize completion timing for our inventory of drilled uncompleted wells.”

ExxonMobil’s biggest LNG opportunities in Mozambique and Papua New Guinea (PNG) continue but at a slower place. Work with the PNG government is ongoing, while timing for the Mozambique project likely is delayed.

Chapman spent a few minutes discussing how ExxonMobil’s far-flung operations are maintaining a “virus-free environment” particularly on offshore platforms and in refineries, where people live and work in close proximity.

“We’ve had to charter planes to move our rotating operating staff all over the globe without the availability of commercial planes. We’ve had to lease hotels in multiple cities to quarantine our folks before they start at 30-day rotations. Our organization’s ingenuity has been remarkable.”

In addition, the teams responded to the “rapidly changing price and margin environment by shifting in facilities when necessary and capturing value from the rapidly changing prices, leveraging our extensive supply chains around the world.” The work reduced costs and paced investments to adjust to the market conditions.

“The shape of the recovery varies by region,” Chapman told financial analysts. “What we saw was a historic demand contraction for transportation fuels, with countries around the world impacted at nearly the same time, but we are seeing a recovery from the recent lows.” Still, the recovery in jet fuel demand “is likely to be much slower,” with “by far the sharpest reduction in demand and the slowest recovery expected.”

ExxonMobil has progressed on reducing capital and cash operating spending. Reductions to the capital investment program for 2020, from $33 billion to $23 billion, are ahead of schedule, reflecting increased efficiencies, lower market prices and slower project pace. An expected decrease in cash operating expenses of about 15% is also ahead of schedule, with savings from increased efficiencies, reduced activity and lower energy costs and volumes.