Demand for LNG imports to Brazil via the Bahia regasification terminal grew in the second quarter despite surging global natural gas prices, according to the terminal’s operator, Excelerate Energy Corp. 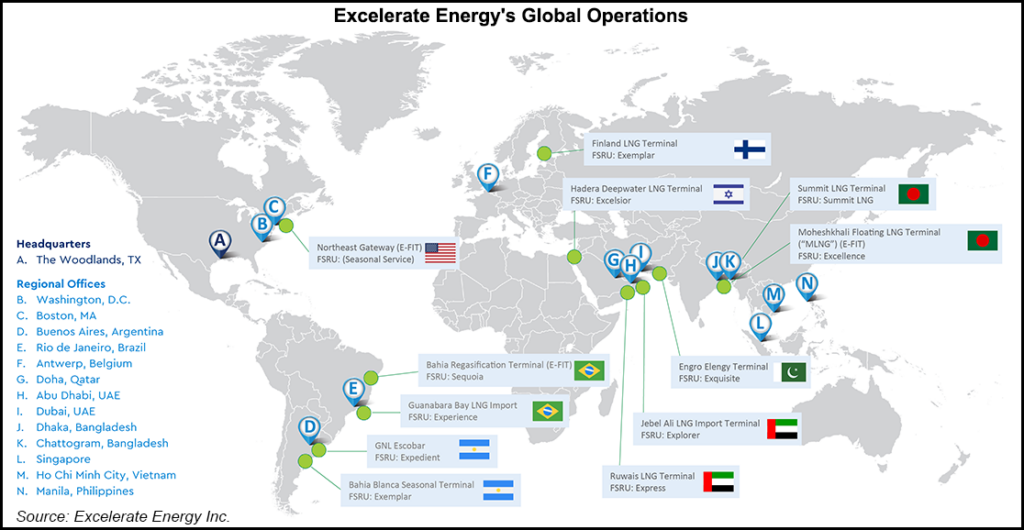 The 700 MMcf/d capacity terminal in the city of Salvador began operations in December 2021.

While a large swathe of its attention is shifting to Europe, management outlined how its expansion into the South American market has been accelerated by supply uncertainty in Brazil.

Kobos said that “Brazil has been a pleasant surprise about the resiliency of demand in the face of what people thought would lead to demand destruction.”

“And that shows on the demand and on their capacity to pay premium prices for energy,” said Bustos. Another major factor, he said, “is the continuous deterioration of Bolivia as a credible supplier” of natural gas to Brazil, according to Bustos. “Let’s remember, we make money in Brazil providing both security of supply and gas sales, and the two products are in high demand.”

Kobos cited solid performance from the regasification business and increased quarter/quarter gas sales at Bahia as driving factors behind the firm’s $39 million of operating income reported for the quarter.

More broadly, the management team said that global liquefied natural gas market volatility during the second quarter helped serve as a springboard for its emergence as a public company and its strategy of becoming a downstream resource for energy-starved countries.

The company launched its initial public offering (IPO) in April, netting it the distinction of becoming the first major U.S. LNG company to go public after Russia’s February invasion of Ukraine. Since then, Excelerate has announced a series of agreements for its LNG procurement and floating storage and regasification unit (FSRU) services on multiple fronts.

Like with its IPO, Kobos told investors the firm’s plan to expand as an integrated energy business was aided by the scramble by countries across the world moving to secure both stable natural gas supply and the expanded infrastructure to use it.

“Importantly, the strategic expansion downstream of our floating terminals is accelerating the growth of our gas sales business and positioning Excelerate for increased profitability,” Kobos said.

Kobos said the firm’s progress during the quarter was especially apparent in Europe, where it is planning several infrastructure projects to secure regasification capacity for countries cut-off from Russian pipeline supplies.

Management gave an update on one of its key projects in Europe, the Vlora LNG terminal planned for the Albanian coast. Last month, Excelerate signed a tentative 1 billion cubic meters/year (Bcm/y) agreement to supply Bulgaria’s Overgas Inc. for 10 years.

Bustos said the project was being handled differently from traditional LNG terminal projects, with early planning and development work occurring during commercial negotiations. By moving forward with initial plans without a formal final investment decision, he said, Excelerate expects Vlora could deliver gas by the second half of next year.

Once the terminal is operational, Bustos said, “we expect about 1 Bcm to be dedicated to the Albanian market and 4 Bcm on some of the peaking capacity to be dedicated” to the wider European market.

Kobos said progress at Vlora could be a welcome sign for European allies preparing for a future without Russian gas, but it also represents the trajectory of Excelerate as it tries to become a bridge between foreign markets and U.S. natural gas supplies.

“We support Europe’s efforts to enhance its energy security through increased access to global LNG supply,” Kobos said. “This is why we have made securing access to Europe’s gas sales market a priority for Excelerate Energy.”

Excelerate is also planning to support Finland with an FSRU at the end of the year after securing a 10-year charter with Gasgrid Finland Oy. Management reported Gasgrid had started work on a new jetty near the Balticconnector pipeline in southern Finland to house the unit once it ends its current service in Argentina.

Excelerate reported a 2Q2022 net loss of $4 million (minus 8 cents/share), compared year/year with net income of 3.6 million before its IPO. The company attributed its net loss to a $21.8 million one-time charge it paid for early termination of the lease on an FSRU it acquired during its IPO process.

Kobos said the strong revenues from its business in Brazil are an example of how Excelerate is benefiting from maintaining a diversified approach.

“I think back in April and May, everyone assumed that every molecule would go to Europe, and what we’re seeing is it’s just not the case even at these prices,” Kobos said.