After slightly cooling on an apparent price correction, European energy markets started the week with another leap upward as the European Union (EU) formalized its winter natural gas storage plan. 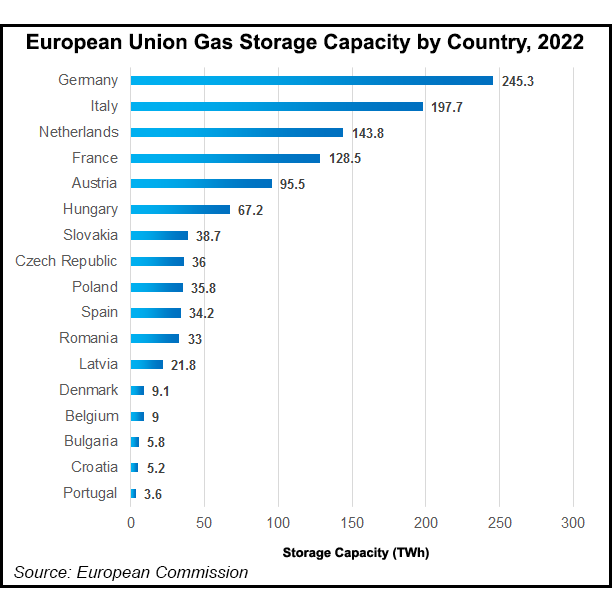 The EU countries officially ratified a plan Monday to reach 80% of natural gas storage capacity available among the 27-country bloc by the winter heating season. Member countries have been considering the plan since it was proposed in March.

Bloomberg reported European benchmark futures rose as much as 6.9% at the start of the week as governments continue to warn about possible rationing actions in the weeks to come. Markets have been reeling for more than a week after news that Russian gas imports on Nord Stream 1 (NS1) could be curtailed by as much as 60%.

Energi Danmark analysts on Friday (June 24) noted that European prices retreated on an “apparent correction” but those losses were likely to be reversed in another “volatile” week. Nordic gas and power markets were expected to fluctuate as traders continued to watch Russian gas flows and the potential impact from EU supply initiatives, analysts said.

“Monday, we see some mixed signals, as the changes to the weather forecasts appear a bit bearish for the market, but since fuels and German power rise, we expect rising prices as the most likely scenario on the Nordic market as well,” Energi Danmark analysts wrote.

Dutch Title Transfer Facility futures for gas in August were at $40.119/MMBtu Friday after rising more than 9% through last week. Early reports from Amsterdam showed the European benchmark rising as much as 0.6% Monday.

After a ramp-up of liquefied natural gas (LNG) volumes to the continent in April, EU storage was 55.7% full Friday, according to NGI calculations. Storage levels were around 6% below the five-year-average and around 24% below the same period last year.
The formalized EU policy could keep already stretched global gas markets tighter beyond the winter heating season. As well as the 80% storage goal by winter, the new regulation also targets EU storage hitting 90% capacity before the winter of 2023-24.

The policy also puts additional focus on LNG and low-carbon alternatives. The policy allows member states to count their stocks of LNG cargoes or “alternative fuels” such as renewable natural gas or hydrogen toward their storage requirements. Some EU members without connection to underground gas storage, like Estonia, Finland and Lithuania are also required to store 15% of their annual gas consumption in reserve in partnering EU nations.

An impending shutdown of NS1 has also been fueling concern. Russia’s PJSC Gazprom is scheduled to close NS1 on July 11 for 10 days of scheduled maintenance. Germany’s Klaus Mueller, president of the Federal Network Agency, told the press there were concerns about whether flows from Russia would restart after NS1 is shuttered for maintenance.

Also on Monday, the European Council awarded around $83 million to Bulgaria to increase its underground storage capacity. Bulgaria has estimated the project could boost capacity to 1 Bcm. The EU has provided more than $5 billion to date in similar grants for energy projects deemed mutually beneficial to the bloc.