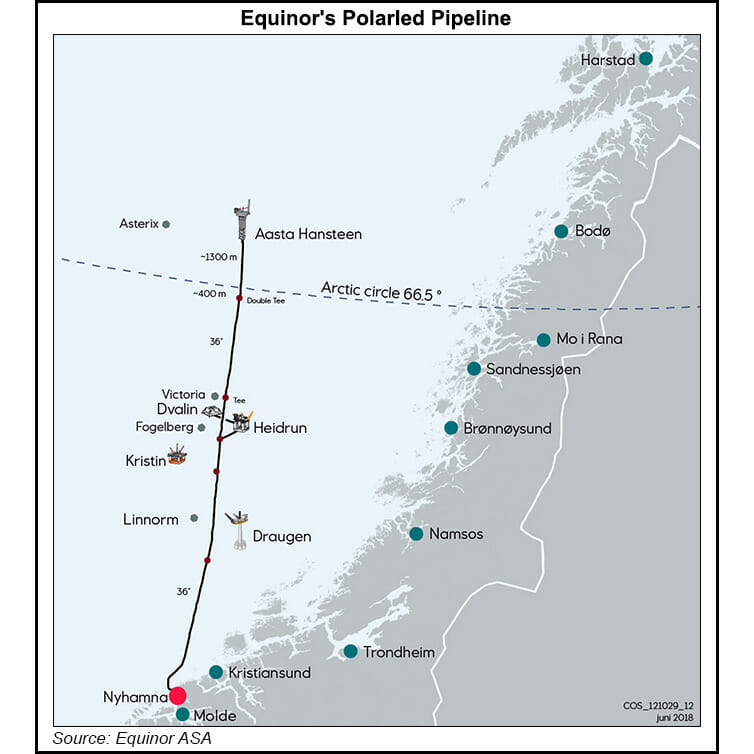 Equinor and its partners told regulators they could tap the Irpa gas field in the Vøring Basin deep below the Norwegian Sea. Discovered in 2009 and previously named Asterix, Irpa is estimated to contain 124 million boe in gas and condensate.

Executive Vice President Geir Tungesvik, who oversees Projects, Drilling and Procurement, said “the development of Irpa will contribute to predictable and long-term deliveries of gas to customers in the EU and the UK.”

Equinor would operate and be majority owner in Irpa with a 51% stake, with Wintershall Dea GmbH holding 19%, Petoro AS at 20% and Shell plc with 10%.

Irpa’s project director Hogne Pederson said the development would be an engineering challenge, as pipeline technology is adapted to handle sub-zero temperatures nearly one mile below the ocean’s surface. However, support from partners and “increased demand for gas have made an investment decision possible,” Pedersen said.

Norway’s natural gas resources and production activities have been under a spotlight over the past year as countries dependent on Russian gas seek new supplies. During 3Q2022, Equinor increased its gas supply to Europe by 11% year/year. In 3Q2021, output had been a high mark for gas production volumes as it began ramping up activity.

Equinor has agreed to supply Poland and Denmark through the new Baltic Pipe System, which came online in October. State-owned Polish Oil and Gas Co. signed a deal to annually purchase 2.4 billion cubic meters (Bcm), or about 84 Bcf/year, for 10 years. Earlier in the month, Equinor inked an agreement with Denmark’s Ørsted AS to supply around 27.3 Bcf over 16 months.

Utilities in the UK have also been looking to Equinor and Norwegian production as a possible source of additional natural gas supply.