In a sign of just how grim the commodity price environment has become — and how long it’s expected to last — ConocoPhillips cut its quarterly dividend for the first time in at least 25 years on Thursday, while also dropping 10 rigs and slashing capital expenditures (capex) for 2016 as it looks to maintain its balance sheet without racking up additional debt. 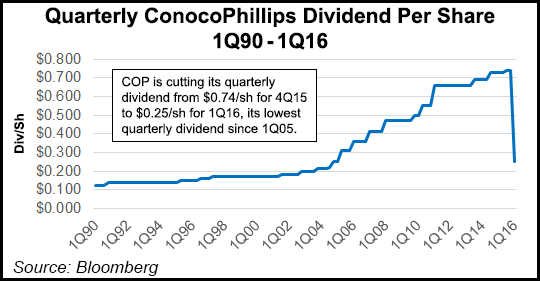 The Houston-based producer, the largest independent in the country, made a two-thirds cut to its dividend: from 74 to 25 cents/share. It also revised the plans it announced just eight weeks ago (see Shale Daily, Dec. 10, 2015), cutting capex from $7.7 billion to $6.4 billion and operating cost guidance from $7.7 billion to $7.0 billion.

Production for 2016 is expected to remain flat compared to 2015 — 1.54-1.58 million boe/d for 1Q2016 — as the company shifts to a three-rig drilling program. Reduced production in the Lower 48 is expected to be offset by projects elsewhere, especially from Surmont Phase 2 (an oilsands project in Alberta) and the Australia Pacific Liquefied Natural Gas project (see Shale Daily, Dec. 8, 2014; March 4, 2013).

“It goes without saying that these were difficult actions to take,” CEO Ryan Lance said during a conference call Thursday. “But they will improve our ability to manage through the price weakness the industry is facing. They will improve our medium-term outlook by allowing us to accelerate performance as prices turn, and they will help the long-term performance of the business by making us more resilient in a world of lower, more volatile prices.”

ConocoPhillips reported a 4Q2015 net loss of $3.5 billion (minus $2.78/share), compared with a net loss of $39 million (minus 3 cents) in the year-ago quarter. Excluding special items, adjusted earnings for 4Q2015 were a net loss of $1.1 billion (minus 90 cents/share), compared with adjusted earnings of $700 million (60 cents) in 4Q2014. Special items for the current quarter related primarily to noncash impairments because of price impacts and changes to future exploration plans, partially offset by net gains on asset sales.

According to historical dividend records, ConocoPhillips has either increased or maintained its quarterly dividend for every quarter going back to at least 1990, when it was 12.5 cents/share.

With the dividend cut, the new breakeven price for ConocoPhillips falls from a Brent crude price of $60/bbl to $45/bbl. Lance said the important takeaway was that the company would be able to pay the dividend “for many years” at $45/bbl, without having to sell assets or increase its debt levels, a luxury many of its smaller peers don’t have.

“This significant improvement in our breakeven price will allow us to generate greater profitability and cash flow growth when the cycle turns,” Lance said. “The combined reset of capital, operating costs and the dividend will enable us to generate free cash flow that we can deploy across a range of choices, including increased investment in our low cost of supply resource base, but also including returning capital to shareholders.”

During the question and answer session, where analysts expressed concern about the dividend cut, Lance said the decision to make the cut and preserve the balance sheet was made after the company determined that the low price environment could linger late into 2016 and possibly extend into 2017. He added that supplies show no sign of leveling off, as the Organization of the Petroleum Exporting Countries (OPEC) works to protect its market share, at the expense of unconventional U.S. drillers.

“I think we have seen the resiliency in the unconventional revolutions,” Lance said. “It’s opened up a new supply source that’s more a flexible, lower cost of supply than some of the other conventional production like deepwater.

“The capital cuts the industry is making should result in a supply rebound or a supply shock…The Saudis could lead OPEC to a different decision whenever they feel like the point they’re trying to make has been made, and the lower prices are stimulating demand. So there are pieces on both sides of this thing that balance out the concern about where mid-cycles might be going to.”

Lance said ConocoPhillips was committed to providing a competitive dividend. “We’ll have disciplined growth,” he said. “We’ve got a deep inventory of growth options if the free cash flow is there to generate it, and we believe in financial strength, which is why we need to keep a very strong balance sheet.

“We’re hitting the reset button here a little bit. It was a gut-wrenching decision for us to do that. But fundamentally, I don’t think that value proposition has changed. We’re going to lower the breakeven costs for the company…and the low cost of supply resource base hasn’t gone away with this change. It’s still there, and it still offers a lot of investment choices for the company.”

Wolfe Research analyst Paul Sankey questioned the timing of the decision to cut the dividend. “Why didn’t you tough it out for another year?” he asked. “My concern is that…in debt markets, for instance, [this decision] surely is going to affect many other companies much worse than you. I’m just worried that you’ve kind of capitulated.”

But Lance said the decision was made to keep the company investment grade in the wake of what is expected to be a longer downturn. “We didn’t think it was appropriate to take [the company] up to the edge and destroy it, or put it in a place where we no longer had a strong balance sheet in case the worst case happened and this was prolonged for a longer period of time,” he said. “It’s informed by where we think the market is today and the changes that we have seen with respect to the capacity we have on the balance sheet to remain investment grade.”