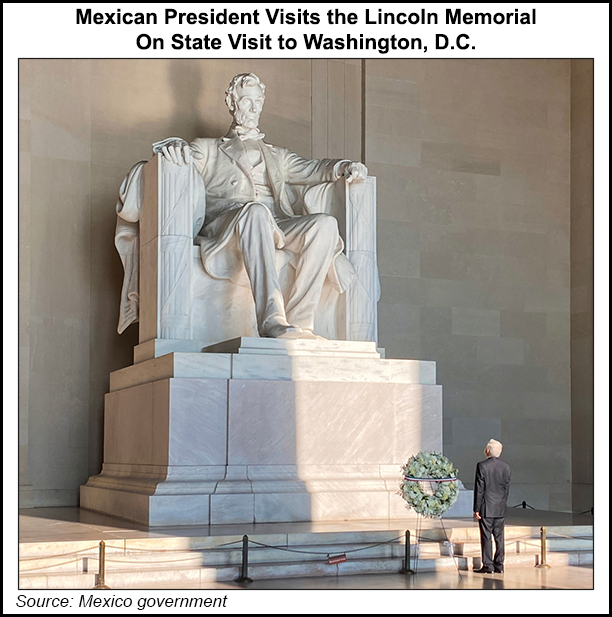 Mexican President Andrés Manuel López Obrador’s July visit to the White House was an emblematic event and true to his political style. In an environment of economic desolation and amidst a public health catastrophe at home, the Mexican president departed on his first trip abroad to celebrate the symbolic signing of the U.S.-Mexico-Canada Agreement (USMCA), the revamped North American Free Trade Agreement (NAFTA).

López Obrador, who goes by AMLO, gave a glowing speech at the Rose Garden celebrating the great friendship between the two nations and then attended a gala dinner with U.S. President Trump and Mexican billionaires where massive investment projects were talked about. All the negatives, the sordid slanders, were omitted. In essence, it was one of AMLO’s rambling daily morning press conferences extended out onto the international stage.

Since those topics were skipped, let’s go over the contents of those treaty chapters briefly.

The eighth chapter, or the ‘Recognition of the United Mexican States’ Direct, Inalienable, and Imprescriptible Ownership of Hydrocarbons,’ is notable for its specificity. Its inclusion was clearly pushed for by the new Mexican government, and is a showcase for its obsessive association of sovereignty with hydrocarbon reserves. It’s an ideological, not commercial position. The chapter stresses that beyond the ownership of its reserves, Mexico has the right to change its domestic laws and reform its constitution.

Chapter 21 of the treaty meanwhile should come as a breath of fresh air for Mexico’s competition watchdog, the Federal Commission on Economic Competition (Cofece), one of the few internal counterweights that exist against the centralization of power in Mexico. As readers will know, Cofece recently managed to stop the attempts of the Energy Ministry to distort the economic dispatch impetus in the operation of the electrical network. Economic agents involved in the Mexican energy sector must feel better about the fact that the treaty calls for national competition laws that prohibit anti-competitive practices and that promote competition. Pro-competition agencies in the North American region must now work with the purpose of increasing economic efficiency and consumer welfare. Each member of the treaty must also make sure the respective authorities enforce the application of their competition laws.

Of course, this also didn’t make the news during the trip, nor the fact that the current Mexican government is suspicious of technocratic leaders and that political appointees have now replaced specialized employees in government agencies in Mexico, that in general the Mexican government under AMLO has proven antagonistic to free trade and economic efficiency.

Chapter 22 has a lot to do with the champions of the Mexican energy sector, state energy firms Pemex and CFE. Unbeknownst to many, these two companies are among only a few companies in which the Mexican government has a relevant stake, and so are the final bastions of the state in the Mexican economy. The new treaty expects them not to exercise discriminatory behavior, and to observe due commercial considerations when buying or selling products. In an environment in which Pemex and CFE are dependent on refined fuels and natural gas from Texas, and have commercial subsidiaries established in the United States, it is a matter of the utmost importance that there is no unfavorable treatment by the Mexican government to these firms.

Within the same chapter, there is a section that prohibits non-commercial assistance to state companies that do not sell electricity. Assistance cannot occur when it is to help an insolvent or financially viable company in question. In North America, there is no more conspicuous example of the above than Pemex. The Mexican state does whatever it can to prop up Pemex. It is not a minor issue both for the health of the regional energy sector and for its macroeconomic stability. In this same section, there is a clause stipulating that prices administered by public companies cannot serve as an industrial policy. A control of fuel prices, politically tempting for a populist government like that of López Obrador, can be understood as damaging to the interests of other trading partner countries under the treaty. Market share is also a subject of this chapter, and a state company cannot restrict free competition to maintain its incumbent position. A wording that seems tailored to contain the monopoly impulses of the government regarding Pemex; and the same can apply for CFE, except that the interpretation of the exception case to companies that sell electricity can serve as legal clearance.

Reflecting on the good cheer with which President López Obrador first traveled outside of Mexico to celebrate the start of the treaty, it is quite possible that no one informed him of these details and their implications. Or perhaps it was all part of his act. North of the Rio Grande, he was not only willing to wear a mask, but he also transformed into a pro-market advocate for commercial integration. All of this contrasts with his reckless physical closeness to all people while at home, his open hostility to the business class, and his dislike of private investment.

Next to Donald Trump, we all witnessed how a list of good ideas strangely emerged from his lips. He mentioned the complementarity of the three countries and the benefits of integration, when his daily discourse is all about self-sufficiency, particularly of energy resources. He spoke of new technologies and open markets, when at home he tramples on renewable energies, bets on fuel oil, and dismantles energy regulatory bodies with massive cuts in personnel and accuses the private sector of immoral corruption and seeking to dismantle Pemex and CFE.

Of course, his speech and his words while in the United States are absolutely positive for the wellbeing of North America. Strengthening the region to improve global competition, taking advantage of specialization and comparative advantages to lower costs, raising standards to improve employment in the three countries, leveling working conditions and improving cooperation mechanisms are ideas that should help each nation thrive. However, it is useless to engage in fuzzy concepts such as energy sovereignty while also partaking in a trilateral treaty whose function it is to achieve reliability of energy supply, continuity of services and economic efficiency in the three countries simultaneously.

The highlight of President Lopez Obrador’s trip came during the gala dinner when a Sempra Energy executive stood up to reaffirm his company’s commitment to Mexico and the Energia Costa Azul liquefied natural gas project in Baja California. Using American gas, it’s the perfect sort of project symbolizing the closeness of the countries. Personally, I would have also liked to hear that as a matter of regional security, both governments were committed to ensuring the development of the Agua Dulce area in the same way that the Henry Hub area is cared for and monitored, thus ensuring the reliability of natural gas supply to Mexico, but that’s asking a lot.

Paraphrasing President López Obrador, Mexico and the United States need to stop being distant neighbors, or even close friends, but rather in energy they should work towards becoming long-term partners with common interests.