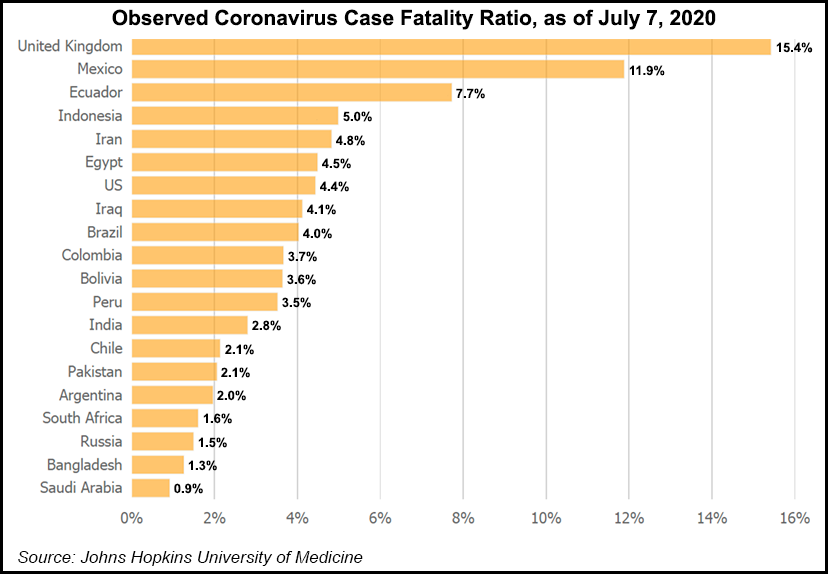 Mexico is facing a “triple crisis” on the public health, economic and governance fronts, with worrying implications for the energy sector and few encouraging signs for the near future, according to Tony Payan of Houston’s Rice University.

After posting flat growth in 2019, the world’s 14th-largest economy is projected to shrink by at least 10.5% this year as the coronavirus continues to wreak havoc domestically and abroad, Payan, who directs the Center for the United States and Mexico at Rice’s Baker Institute for Public Policy, said during a webcast presentation on Tuesday.

Mexico’s response to the pandemic has been among the world’s worst, he said, noting that the country had surpassed 261,000 confirmed cases and 31,000 deaths from the highly transmissible virus.

However, the true figures are likely to be up to 3.5 times higher, he said, due to Mexico’s Covid-19 diagnostic testing rate of about 0.5 per 1,000 people, among the world’s lowest.

Johns Hopkins University data showed an observed case-fatality ratio, i.e. the number of deaths divided by the number of confirmed cases, of 11.9% in Mexico versus 4.4% in the United States as of Tuesday, suggesting a higher share of undiagnosed cases in Mexico.

State oil and gas company Petróleos Mexicanos (Pemex) said Monday that 3,550 of its roughly 750,000 employees, retirees and family members had tested positive for Covid-19, but that the company had “contained” the virus.

The company has so far recorded 12,367 suspected cases of the virus, and conducted 6,063 diagnostic tests.

While Pemex workers and their families at least have access to high-quality healthcare, many Mexicans are not so lucky.

With available public funds going toward a costly oil refinery, a railway for tourists in the Yucatan Peninsula and a new airport outside Mexico City, the government has few resources to combat the economic impacts of the pandemic, Payan said, citing that the government has spent less than 1% of GDP on economic stimulus measures in the wake of Covid-19.

On the governance and security front, Payan said that López Obrador has waged war on the country’s autonomous federal regulatory agencies, such as the Comisión Reguladora de Energía (CRE) in the energy sector and, more recently, the Instituto Nacional Electoral (INE), which oversees elections, and which the president has said must be restructured.

Mass layoffs were reported last week at the CRE, which plays a role similar to that of the Federal Energy Regulatory Commission in the United States.

Payan said that many of the most competent public servants at the CRE and upstream hydrocarbons regulator Comisión Nacional de Hidrocarburos have quit due to the president’s state-centric energy policies and austerity measures targeting the salaries of public servants.

Payan said López Obrador is “dismantling” the country’s 2013-2014 market-opening constitutional energy reform, not by changing the constitution, “but specifically by disabling the regulatory agencies meant to implement the reform.”

In his daily morning presser on Tuesday, meanwhile, López Obrador accused INE of facilitating electoral fraud in the past, without offering specific examples.

A midterm election is coming up in July 2021 that will see 4,000 elected positions up for grabs across the country.

Despite the concerns raised by Payan, not all news has been bad for proponents of the energy reform and the cross-border energy trade between Mexico and the United States.

U.S.-Mexico natural gas exports have been surging, and are set to rise even more now that the final section of Fermaca’s Waha-to-Guadalajara pipeline system has begun flowing gas.

Relations between the two countries appear to be relatively friendly, at least for now, following the entrance into effect on July 1 of the U.S.-Mexico-Canada-Agreement (USMCA), a revamped version of the North American Free Trade Agreement.

López Obrador on Tuesday was on his way to Washington for an official visit with President Trump, the first trip outside Mexico taken by López Obrador since he took office in December 2018.