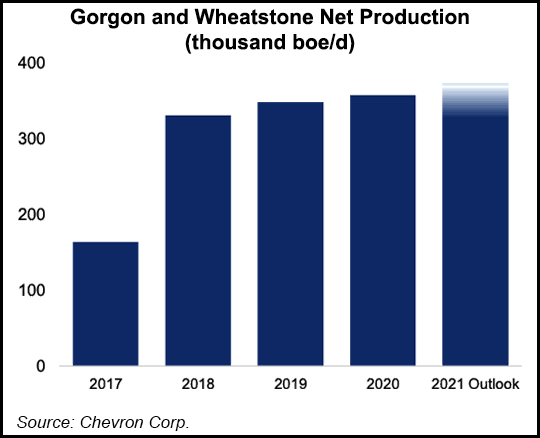 Chevron, which operates Gorgon with a 47.3% stake, took it temporarily offline last year for repairs after welding cracks were discovered. Chevron was checking each train at a time, which meant that at least one train had been down for repairs since the middle of 2020.

“Repairs to the Gorgon propane heat exchangers are complete, and we now have all five operated LNG trains online in Australia,” Johnson told investors. Production from Gorgon in 2020 had averaged 2.1 Bcf/d natural gas and 15,000 b/d condensate.

Chevron also is working to reduce emissions from Gorgon and the Wheatstone LNG export project, also in Australia. In early July a final investment decision (FID) was made to spend an estimated $4 billion to boost compression from the Jansz-Io field. The development, expected to take about five years to complete, is aimed at maintaining supplies to Gorgon by supporting “the flow of natural gas to Barrow Island,” Johnson said.

“The Gorgon stage two project in Australia has been very efficient and gone ahead of plan,” he noted.

Even with taking on more assets via the takeover of Noble Energy Inc. last year, costs are coming down across all of the major projects.

“From a cost standpoint, the Permian drilling and completion and other U.S. shale and tight plays has been very efficient,” Johnson said. “And then we’re seeing just overall good discipline on costs, making sure every dollar counts. It’s really consistent with operating in not only this Covid environment but operating with a very disciplined mentality throughout the organization.”

The other track is to not overextend, even with high commodity prices.

In the Permian, for example, “production is expected to be comparable to last year,” at around 600,000 boe/d by year’s end, Johnson said.

“Consistent with the guidance we shared in March, we’re adding rigs and completion crews in the second half of this year…We expect free cash flow, excluding working capital, to exceed $3 billion assuming an average Brent price of $65/bbl.”
While production is set to be flat, Chevron has committed to reducing the “carbon intensity of our Permian operations,” he said. “One recent example is our shift from diesel fuel to electricity and natural gas to power drilling rigs and completion spreads. This reduces emissions, reduces well costs and takes trucks off the roads, which results in higher returns and lower carbon.”

In the Colorado portfolio, he said the “newest generation of production facilities has eliminated the tanks and flare system.” Carbon intensity has been reduced to around 6 kilograms of carbon dioxide equivalent/boe.

In the deepwater Gulf of Mexico (GOM), the Ballymore project is being developed as a subsea tieback to Chevron’s existing Blind Faith facility, Johnson said. “The project recently entered front-end engineering and design and remains on track for an FID next year.”

Chevron in late July also agreed to sanction with operator Royal Dutch Shell plc the deepwater GOM Whale project, “which has the potential for future expansion,” Johnson said. In addition, fabrication of the Anchor project also in the GOM, “remains on-track, with assembly of the production facility hull underway.”

CFO Pierre Breber, who joined Johnson on the conference call, said the company’s low carbon business is growing. He pointed to the startup to process biofeedstock at the El Segundo refinery in California, which is designed to expand renewable diesel production and cut carbon dioxide (CO2) emissions.

In addition, “we’ve completed front-end engineering on a carbon capture project for emissions from the gas turbines in one of our California cogeneration facilities,” Breber said. “This project leverages two innovative technologies, CO2 concentration and carbon capture, and has the potential to scale across our full fleet of turbines.”

On Thursday the company also launched Chevron New Energies, an organization that would directly report to CEO Michael Wirth.

“This is expected to be an important step toward accelerating growth in new energy businesses to further advance a lower carbon future,” said the CFO. In September the company is hosting a conference call to “provide more details on how we plan to lower carbon intensity in our operations and grow lower carbon businesses.”

Total upstream profits were $3.2 billion, compared with a year-ago loss of $6.1 billion. The U.S. upstream arm claimed $1.4 billion in quarterly profits versus the loss a year ago of $1.8 billion.