Exco Resources Inc. is paying Chesapeake Energy Corp. $1 billion for something wet and something dry: about 55,000 acres in the liquids-rich Eagle Ford Shale of Texas and about 9,600 acres in the drier Haynesville Shale in North Louisiana. 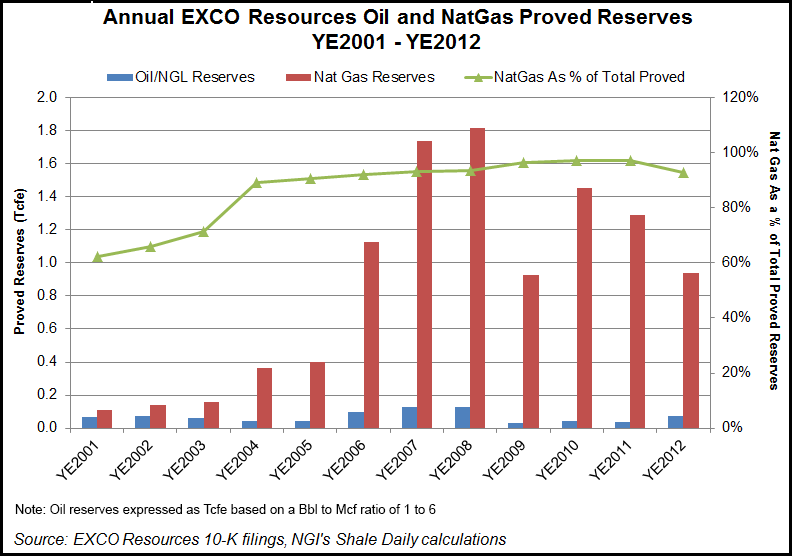 Doug Lawler, who took over as Chesapeake CEO just weeks ago, said the sale Wednesday to subsidiary Exco Operating Co. LP marks another milestone in the company’s paring of assets in order to raise cash. The company recently raised $1 billion in a Mississippian Lime joint venture with a Chinese firm. The choice of Lawler, who had been one of Anadarko Petroleum Corp.’s top exploration and production (E&P) executives, follows on the departure in April of co-founder and charismatic leader Aubrey McClendon. (Shale Daily, May 21).

Exco CEO Douglas Miller said the purchase of producing and undeveloped assets are consistent with the company’s plan to expand in core areas and target new plays.

“The Eagle Ford acquisition establishes our position in the high-value oil core area of the Eagle Ford Shale and delivers immediate production and reserve additions, significant resource potential and solid economic returns. The Haynesville acquisition adds to our leading core position and provides an expanded platform to apply our technical expertise, best-in-class drilling and completion focus, and project execution skills.”

In the northern Eagle Ford Shale, Exco agreed to acquire 55,000 net acres in the Zavala, Dimmit, La Salle and Frio counties, including about 120 producing wells that had 6,100 boe/d net during May. The assets account for $680 million of the aggregate deal value, giving Exco 300 identified drilling locations and a farm-out option on an additional 147,000 net acres, the company said.

Eagle Ford Shale production has been climbing month by month as producers continue to favor the play’s oil and liquids (see Shale Daily, June 24; May 31). La Salle County was the third-highest oil-producing county in Texas in April, according to the Railroad Commission of Texas (see Shale Daily, July 1).

In the Haynesville, Exco is paying $320 million to acquire Chesapeake’s interests in 9,600 net acres in Louisiana’s Desoto and Caddo parishes. Included are 11 units operated by Chesapeake and 42 units operated by Exco. Average net daily production from the Haynesville properties was 114 MMcfe/d during May. The acquisition adds about 55 identified drilling locations, Exco said. Exco’s Haynesville operations have performed well in recent years; however, when gas prices were lower the company was dropping rigs in the play (see Shale Daily, May 3, 2012; Feb. 27, 2012).

At the end of the first quarter, Exco’s company-operated Haynesville/Bossier production was nearly 1.07 Bcf/d gross (316 MMcf/d net). Production contributions from wells operated by others brought the total to 338 MMcf/d net, the company said in its first quarter earnings announcement. “While our current plan is to maintain three rigs through 2013, we will continue to assess product pricing and project economics to make further decisions on our drilling activity,” it said in April. During the first quarter, Exco’s Haynesville focus was DeSoto Parish where well costs were averaging $7.8 million each.

According to analysts at Tudor, Pickering, Holt & Co., Exco is paying about $7,000/acre for the Eagle Ford assets and about $2,800 per Mcf/d of production for the Haynesville assets. The Haynesville portion of the deal is “more surprising to occur and sets a low watermark on production multiples,” the firm said, adding that its range on dry gas production is $3,500-4,500/flowing Mcf/d.

Exco expects to finance the Haynesville acquisition under an existing credit agreement.

The undeveloped Eagle Ford locations are expected to be drilled and developed with units/affiliates of Kohlberg Kravis Roberts & Co. LP (KKR). Exco and KKR have a struck nonbinding agreement for KKR to fund $133 million, which represents 50% of certain undeveloped acreage included in the Eagle Ford acquisition. KKR would become the drilling capital partner in the acreage.