Chesapeake Energy Corp. said it is not planning to seek bankruptcy protection, knocking down a report that led investors Monday to bail on the second largest U.S. natural gas producer. 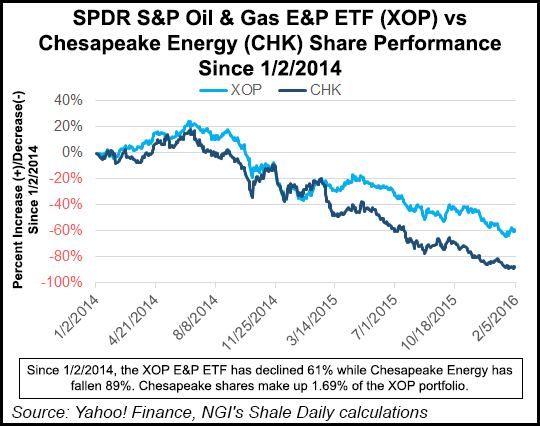 After closing at $3.06/share on the New York Stock Exchange Friday, Chesapeake opened at $2.55 Monday but soon saw its value further wiped out, plunging 33% for the day to end at $2.04. More than 117.39 million shares changed hands, versus an average over the past three months of 24.8 million. The company was the worst performer Monday on the Standard & Poor’s 500 Index.

“Kirkland & Ellis LLP has served as one of Chesapeake’s counsel since 2010 and continues to advise the company as it seeks to further strengthen its balance sheet following its recent debt exchange,” spokesman Gordon Pennoyer told NGI. “Chesapeake currently has no plans to pursue bankruptcy and is aggressively seeking to maximize value for all shareholders.”

Last year Chesapeake scrapped its dividend, put properties on the market and reduced the workforce (see Shale Daily, July 21, 2015). It has close to $10 billion in debt, well above its market value, with $1.3 billion due by the end of 2017. Like its brethren, the company has been slammed by the commodity price rout.

In addition, CFO Nick Del’Osso said last summer poor gas differentials in the Northeast had been hampered by firm transportation contracts (mostly with Williams) that at the time wouldn’t allow for pricing relief for close to a year (see Shale Daily, Sept. 29, 2015; Aug. 5, 2015). Following discussions, Chesapeake renegotiated some fixed-fee agreements that began this year. A collapse by Chesapeake could impact those long-term contracts with the Williams partnership to carry gas at prices that remain favorable to the midstream giant.

However, Chesapeake, which is set to disclose 4Q2015 results on Feb. 24, has an estimated $1.3 billion in debt that is maturing by the end of 2017, with prospects of a cash shortfall of more than $1 billion over the next two years. According to analysts, one wildcard is its borrowing base credit line, estimated at $4 billion, which could be reduced.

The company completed a distressed exchange offer in December that led to about $3.8 billion of notes tendered and in return receiving about $2.4 billion of second-lien debt. It also has $500 million in bonds maturing in March. However, the bonds led high-yield debt market losses early Monday. Notes due in March fell by 74.5 cents from 95 cents a week ago, while bonds maturing in 2017 fell fell to a record low of 34 cents.

Chesapeake’s credit rating in January was cut to “CCC+” by Standard & Poor’s Ratings Service, which has a negative outlook on the assumption that prices will remain weak. The debt leverage is unsustainable, the credit ratings agency said.

Hiring restructuring attorneys would be one of a “string of maneuvers to manage the company’s high debt load,” said Sanford C. Bernstein & Co. LLC’s senior analyst Bob Brackett. Chesapeake also was reported to have hired Evercore in December to advise on its debt, he noted.

“We downgraded Chesapeake in November because we saw little equity value in the firm at strip prices,” Brackett said. “Since then, commodity prices have continued to fall, putting even more strain on the company’s finances.” However, even though there is little equity value at spot prices, Bernstein’s target prices “reflects a world of $68 West Texas Intermediate and $3.00 Henry Hub. If Chesapeake can remain a going concern long enough, the stock would rebound along with commodity prices.”