Canada’s BNK Petroleum Inc. announced Sunday that its subsidiary in the United States has so far seen “very encouraging results” from a test well in southern Oklahoma’s Tishomingo field, in the Ardmore Basin of the Woodford Shale.

BNK Petroleum US Inc. (BNKUS) said the Barnes 6-2H well, located in Johnston County, OK, had achieved a 21-day stabilized pumping production rate of 180 boe/d, with 70% weighted toward oil. The well, which is targeting the Lower Caney and Upper Sycamore formations, is also being tested at select intervals to determine the best locations for drilling laterals at future wells.

“The testing continues, as the individual tests are producing at higher flush rates than expected,” BNK said, adding that the Sycamore interval alone tested 140 b/d, with 70% being oil and the remainder being flowback from hydraulic fracturing (fracking). Caney intervals were deemed inconclusive, flowing at clean oil rates of 200 b/d.

“This is providing good evidence that higher proppant concentrations and potentially more frac stages will further increase the productivity of these zones in future wells,” BNK said. “Based on testing results to date, it is anticipated that future wells will include optimized frac stage spacing, much higher proppant concentrations — analogous to other successful shale oil projects — and 20% longer lateral lengths than this well while targeting the most productive interval.

“These optimizations are expected to further improve on the anticipated production rates and potential overall reserve recoveries in future wells targeting these zones.”

BNKUS models show wells targeting the Caney and Sycamore formations could theoretically achieve initial production rates of 450 b/d of oil, and produce 650,000 bbl of oil over the lifetime of the well, yielding a rate of return greater than 150%. The models show that even a well with an initial production rate of 150 b/d of oil (and 180,000 bbl of oil lifetime) would yield a rate of return of 10%. The models are based on the results seen so far from the Barnes well and a second test well, Nickel Hill 1-26, which is in Carter County.

“Since these zones are present over BNKUS’s entire acreage position with average to above average calculated net pays…based on this modeling, Sycamore/Caney well development, if successful, would provide significant reserve additions,” BNK said.

BNK added that its subsidiary plans to drill wells targeting oily areas of the Woodford Shale in 2013, provided capital is available. 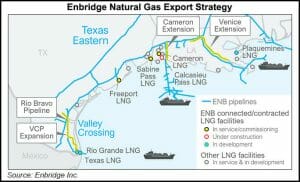 Canadian pipeline giant Enbridge Inc. said Friday it was seeing an uptick in interest for crude and liquefied natural gas (LNG) exports from the U.S. Gulf Coast amid an anticipated global economic recovery from the Covid-19 pandemic. “Our solid regional footprint and premier North American integrated pipeline networks are ideally positioned to capitalize on these…