A strong start to the rainy season in Brazil has boosted hydropower reservoirs and cut the nation’s need for liquefied natural gas (LNG) imports, freeing up more of the super-chilled fuel for buyers in need across the world. 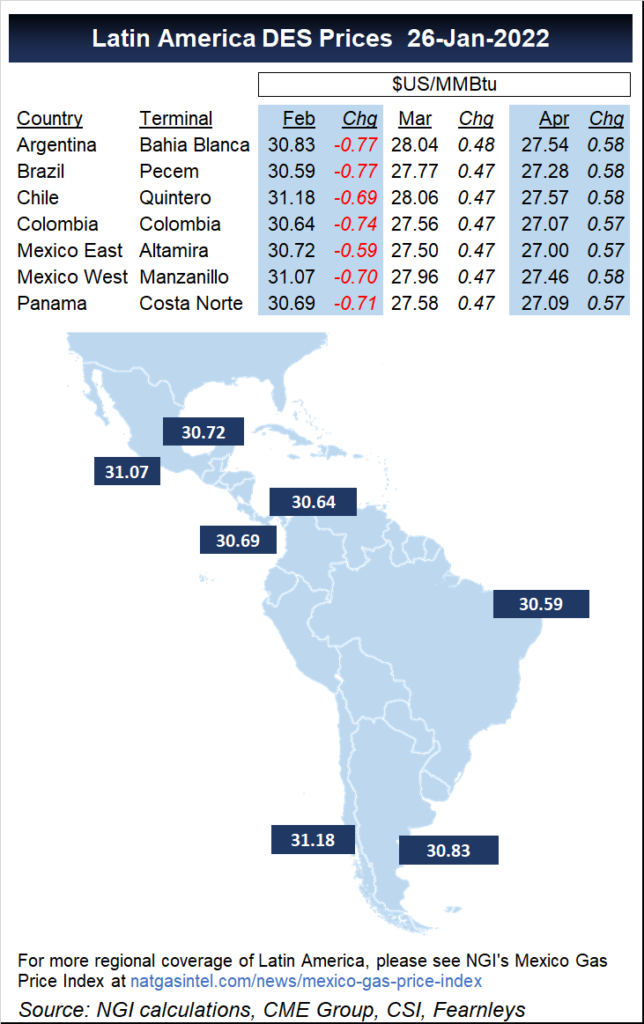 The rainy season runs from December to April. Above average rain levels have given relief to the country’s power system, Wood Mackenzie said in a note this week. Hydropower generation has moved back into the five-year average since November.

“In Brazil, improving hydro reservoir levels will be key to softening the gas balance and reducing dependency on expensive LNG, bringing down gas and electricity prices during the year,” said Wood Mackenzie analyst Tarcisio Tavares.

Brazil’s LNG imports were cut by 28% in December, compared to last fall when reservoirs reached some of their lowest points, Wood Mackenzie said. According to data and analytics firm Kpler, early estimates showed LNG imports have continued to fall this month to 400,000 Mt from 500,000 Mt in December.

“We are seeing gas for power demand dropping, which is relieving Brazil’s demand for LNG,” Kpler LNG analyst Laura Page told NGI. “Certainly, this is freeing up cargoes to supply Europe, particularly from the U.S., which accounted for 85% of Brazil’s supply in 2021.”

A decline in domestic production and a rebound in demand following the Covid-19 outbreak in 2020 helped drive strong LNG buying across Latin America last year. Demand surged to historic highs across the region in 2021. Latin America pulled  30% of all U.S. LNG exports between July and October, according to Columbia University’s Center on Global Energy Policy.

The buying spree came at a time when supplies were already limited, and Europe and Asia were competing for cargoes. A reduction in Brazil’s LNG requirements offers some relief as European storage inventories are low and Asia’s buyers have returned to the spot market amid dwindling gas stocks and colder weather.

Wood Mackenzie cautioned that hydro reservoirs could still fail to reach normal levels by the end of the wet season, creating some uncertainty for the nation’s gas demand and power supply mix this year.

For now, rainfall levels are expected to remain near the long-term average during the rest of the season. Wood Mackenzie is forecasting natural gas demand in the power sector to average 48.5 million cubic meters/day (MMcm) this year, with overall gas demand averaging 111 MMcm/d. The nation is expected to import an average of 27.2 MMcm/d of LNG at an average price of $22.30/MMBtu this year, the firm said.