The Biden Administration remains committed to supporting robust levels of LNG exports in support of Europe’s efforts to bolster supplies for winter, according to a report Tuesday. 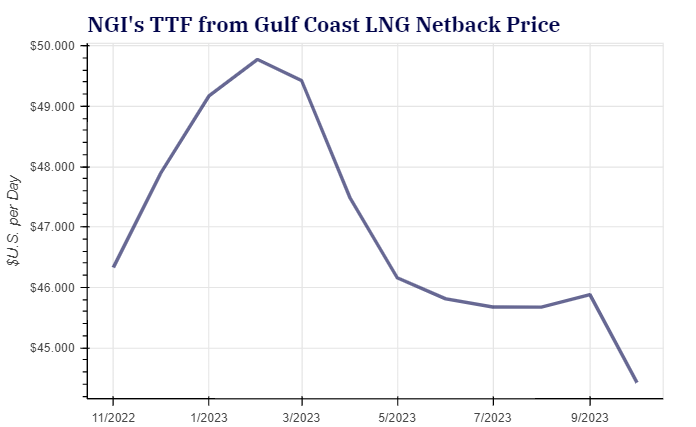 The continent is moving with haste to reduce its dependence on Russia amid the Kremlin’s war in Ukraine and is consistently calling for U.S. shipments of the super-chilled fuel.

During a scorching summer that fueled robust cooling demand in the Lower 48 and in Europe – combined with precarious storage supplies globally – U.S. prices soared to 14-year highs around $9.00/MMBtu. This elicited calls from consumer and manufacturing advocates to curb exports of liquefied natural gas to preserve supplies for domestic use. This, they argued, could help contain U.S. costs this winter, when both demand and prices are widely anticipated to rise anew after a fall weather reprieve.

In a report Tuesday, however, Reuters cited senior White House officials who said Biden, after a new analysis of Europe’s energy needs, had ruled out any limits on natural gas exports during the coming winter. They cited the need to support Europe during the depths of the heating season.

The president, shortly after Russia invaded Ukraine in late February, vowed to back the European Union (EU) and North Atlantic Treaty Organization (NATO) as they pushed against the Kremlin and took steps to guard the continent from Kremlin aggression. This included assurances to deliver 15 Bcm of LNG ahead of winter, and the United States already has eclipsed that goal.

“President Biden made a commitment in March and we have been moving out on it. We surpassed the LNG export goal President Biden set,” an administration official told Reuters, noting a 30 Bcm in U.S. LNG exports to the EU since early March, double the same period of 2021.

“And because of the steps we and our partners have been taking, gas storage in Europe is at a significantly higher level than last year. More work remains,” the official said.

EU officials have called on countries across the continent to stock up on LNG to offset supplies from Russia cut off by the Kremlin. Prior to the war, Europe had depended on Russia for roughly a third of its natural gas; it recently has received only about 10% from Russia.

Because of LNG from the United States and elsewhere, along with energy conservation, the continent is on track to fill storage to a level adequate for an average winter. But the EU continues to push for more to defend against the potential of a protracted or particularly cold winter.

As it stands, according to Rystad Energy, Europe needs at least modest flows of Russian gas or continued strong levels of LNG imports to weather a harsh winter. The latter source appears more reliable. U.S. exporters, already approaching record activity levels ahead of the war, have since operated at or near capacity – aside from repair projects – through the lion’s share of the conflict in Ukraine.

Russian state-run Gazprom PJSC last week also warned it may halt all supplies to western Europe via Ukraine. This signaled that demand for U.S. exports is all but sure to remain near record levels through the coming winter, maintaining an important undercurrent for U.S. natural gas bulls.

The White House’s LNG analysis reportedly was conducted as the administration looks for new ways to combat inflation that reached a 40-year high in 2022, in part because of soaring energy costs. Biden has repeatedly said he is concerned about the burden of inflation on Americans, with high home-heating costs this winter likely to amplify the challenges.

But with Russia entrenched in Ukraine and U.S. production reaching a record level of 102 Bcf/d this month – and domestic supplies ramping up this fall – the administration reportedly determined U.S. supply/demand concerns had eased enough to remove any consideration of an export ban or government-imposed reduction.

The U.S. Energy Information Administration’s (EIA) latest storage report posted an injection of 103 Bcf into storage for the week ended Sept. 23. The result matched the prior week’s print and the peak for the season. Early estimates in a Bloomberg poll pointed to another triple-digit build with this Thursday’s EIA report, which covers the final week of September.

Still, Allen added, the possibility of a “severe and protracted winter season” remains a major wildcard for natural gas markets.

The Industrial Energy Consumers of America (IECA), a manufacturing advocate, has led the opposition of further expanding LNG export projects, citing domestic supply concerns and elevated prices.  That remains the case, said IECA President Paul Cicio. But he told NGI that the nonprofit understands why Biden would avoid curbs on exports now, given the heightened tensions in Ukraine and Europe, by extension.

“We are not surprised by the White House decision. The U.S. needs to do what it can to supply NATO countries,” Cicio said.

“It is important to note that the White House is only supporting ongoing exports, which raises a question about new capacity,” he added. “We think this administration understands that excessive LNG exports are inflationary.”

Henry Hub futures prices have declined to below $7.000/MMBtu this fall. But just a few weeks ago, they hovered around $9.00 – double 2021 prices. Should the market return to that threshold this winter, it would increase American consumer heating bills by $156 billion from last year, Cicio estimated.

“Biden should take action to limit export volumes because they are inflationary and threaten reliability,” he said.