Top North American natural gas marketers reported stronger overall sales volumes for the second quarter as production gathered momentum in response to strong consumption and prices. A multitude of enduring demand drivers could fuel momentum through this year and into next, marketers and traders say. 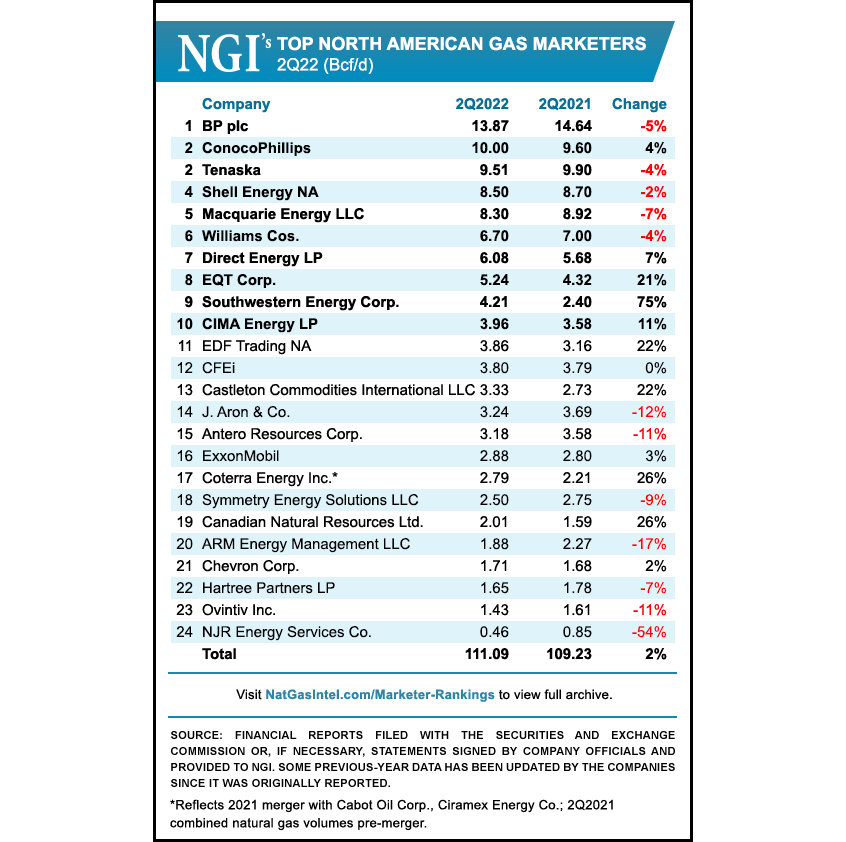 The collective increase was fueled by deeply rooted domestic demand and soaring calls for U.S. exports – both expected to endure – as well as gradually increasing output to meet global needs. After price spikes in the spring, demand propelled natural gas futures above $9.00/MMBtu in August and again this month and could keep upward pressure on prices for years.

Many analysts expect both rising production and higher sales volumes to continue through the second half of 2022, given tight global supplies following a scorching summer and fallout from Russia’s war in Ukraine. European demand for American LNG is elevated and expected to remain so through the winter. Countries across the continent are trying to reduce dependence on Russian gas in protest of the Kremlin’s invasion of Ukraine. They are looking for U.S. LNG to help fill the void long term.

Even those marketers with flattish second-quarter results relative to a year earlier were upbeat on opportunities in the market.

No. 3 Tenaska, whose volumes ticked down 4% from a year earlier, sees the potential for advances in the second half of 2022.

“It’s amazing what producers have done” to ramp up output this year “and you can’t envision any way that LNG facilities will operate at anything other than full-out pace,” Mark Whitt, president of Tenaska Marketing Ventures unit, told NGI. He also noted the waning coal supply trend that, in turn, adds to natural gas demand.

“It always depends on the weather; that tends to drive our volumes,” Whitt added. “If we get a decent winter, our volumes could look pretty good.”

Futures prices, while volatile, are “are likely to stay elevated” through this year and into next as a result, Rystad Energy analyst Karolina Siemieniuk noted.

The market, however, will get only a brief respite, Blair said, as utilities are relatively light on storage ahead of the coming winter. Production, he said, may need to remain elevated to align supply/demand, particularly if there are prolonged bouts of widespread cold in the winter ahead.

U.S. inventories stood at 2,771 Bcf for the week ended Sept. 9 – the most recent for which Energy Information Administration (EIA) data was available — well below the five-year average of 3,125 Bcf.

“Over the next few months, the storage situation is going to shape this market,” Blair said. “Demand will be strong again in winter, and we’ll need the added production.”

Increased output to meet elevated demand would keep marketers busy this quarter and beyond, extending the positive trajectory of the second quarter.

Big Gainers At The Top

Half of the Top 10 in the NGI ranking were notable gainers. No. 2 ConocoPhillips’ volumes rose 4% from a year earlier. The Houston-based independent became a stalwart near the top of the rankings after its acquisition of Concho Resources Inc. early last year.

These companies were bullish during the recent second quarter earnings season or in public comments since. Prices have more than doubled this year and recently approached the highest levels since 2008.

ConocoPhillips’ Matthew Henderson, senior market analyst, said natural gas prices may prove volatile given recently thin liquidity in energy markers. Overall, though, the bull case is firmly intact given elevated cooling demand in an era of persistently hot summers and the robust global calls for U.S. exports of LNG, he said at an LDC Gas Forums event in Denver in August.

Henderson also noted that utilities across the Lower 48 made long-term commitments to natural gas as a principal energy source over the past decade, minimizing their alternatives. Now, as the United States marches on with coal plant retirements and emphasis on alternative energy, it is increasingly difficult to switch from gas to coal when prices for the former spike, as was the practice in the past, Henderson said. This effectively cements reliance on natural gas and adds a fixed demand element to the market for several years.

StoneX Financial Inc.’s Thomas Saal, senior vice president of energy, agreed. “Going forward, beyond shoulder season, the demand is going to be there – we have every indication of that,” he told NGI. “LNG and the global need for gas is very real.”

Williams is in the midst of investing $1.5 billion to grow its natural gas transportation capacity by nearly 2 Bcf/d over the next few years to meet demand. Among six transmission projects the midstreamer is developing is a 364 MMcf/d expansion on Transco, the country’s largest gas system.

BP plc, the top North American natural gas marketer despite losing ground over the past couple years amid efforts to invest in renewables, is now building up its gas arm with the purchase of Houston-based EDF Energy Services (ES).

The agreement, inked this month, would likely increase BP’s natural gas volumes, which dipped 5% lower year/year in the second quarter.

BP’s Orlando Alvarez, senior vice president of Gas and Power Trading Americas, touted the gas business after announcing the ES deal. “BP’s commitment to putting the customer first has helped make us the largest marketer of natural gas in North America for the last 20 years, as well as a top power marketer in the U.S.,” he said.

The agency said in its latest monthly Short-Term Energy Outlook that it expects U.S. dry gas production to average 99.0 Bcf/d in the fourth quarter, up from 94.6 Bcf/d in 1Q2022. Output will then climb to an average of 100.4 Bcf/d in 2023, EIA estimated.

“I think you have to point to strong demand,” said Tenaska’s Whitt.