The Williston and Permian basins are expected to drive at least 300,000 b/d of shut-in oil supply from Lower 48 operators during May and June, up from about 100,000 b/d of cuts projected for April, according to new analysis by Rystad Energy. 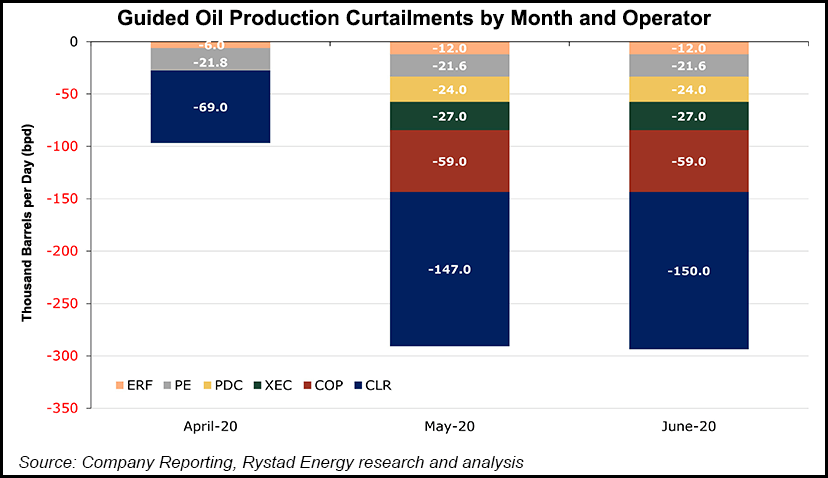 “It is unclear how much of this is due to the Covid-19 pandemic and the related drop in demand, but one thing is certain: more production is likely to be taken offline due to the low oil prices,” said the Rystad team led by Veronika Akulinitseva, vice president for North American shale and upstream.

“Several producers have specifically mentioned production declines as a result of well shut-ins, while others did not specify whether production curtailments would come naturally as a result of a reduction in new wells put on production, or from shut-ins of already producing wells,” researchers said.

Operators are likely to prefer the latter option, the Rystad team said, but “given the severity of the current market situation and the significant production curtailments announced already in April, shale producers are also likely to implement well shut-ins to bring the market into balance.”

Continental has announced the most drastic cuts so far, said the Rystad analysts, who expect about 69,000 b/d in cuts from the Oklahoma City-based producer in April, followed by nearly 150,000 b/d in May and June.

ConocoPhillips, meanwhile, has pledged to cut around 60,000 b/d net in May.

Parsley management has announced plans to shut-in around 400 “lower-producing wells,” which Rystad estimates would translate to about 22,000 b/d from April to June.

Rystad expects April production from Enerplus in the Bakken to be modestly impacted in April, but to “at least double in May and June.”

While supply cuts will be spread across the Lower 48, “production in the Williston Basin will likely be affected the most,” said Akulinitseva, followed closely by the Permian’s Delaware sub-basin.

The Rystad team said production from Bakken-focused Whiting Petroleum Corp. is likely to decline faster than previously thought, as it recently filed for Chapter 11 bankruptcy protection.

In related news, the Energy Information Administration (EIA) announced a 10.1 million bbl build of total crude inventories for the week ended April 24, a figure below the consensus estimate of 10.6 bbl, but more than five times the normal seasonal build of 1.9 million bbl, as highlighted by Raymond James & Associates Inc. analysts in a Wednesday note to clients.

A historic agreement reached three weeks ago by the Organization of the Petroleum Exporting Countries and its allies, aka OPEC-plus, to slash output by 9.7 million b/d in May and June “still falls short of balancing the oil market in the near term,” the Raymond James team said, citing as evidence the “especially severe storage pressures” at the Cushing oil hub in Oklahoma that drove West Texas Intermediate futures into negative territory earlier this month.

Analysts at Clearview Energy Partners LLC estimated Cushing working oil storage at around 81% of capacity, about 24% higher than a year ago.

Adding to the Lower 48 storage pressure, Rystad analysts said Wednesday they expect 28 tankers carrying about 43 million bbl of Saudi oil to arrive on the Gulf and West coasts between April 24 and May 24, joining an existing traffic jam of 76 tankers currently waiting to unload in U.S. ports.

The volumes booked to arrive from Saudi Arabia’s Ras Tanura port are nearly four times the previous four-week average for imports from the OPEC leader, said Rystad’s Paola Rodriguez-Masiu, senior oil markets analyst. Because of the current congestion and lack of storage, “we find it unlikely that all tankers will be able to unload upon arrival.”

According to Rystad, if all the Saudi tankers were to unload, “the crude they carry will offset during May almost all of the production reductions from March levels, effectively maintaining the current high storage filling rates.