Continental Resources Inc. has launched a growth plan to triple production and proved reserves between now and the end of 2017, largely from its leading Bakken Shale position, but also with gains from other onshore holdings, including a discovery in the southwest corner of Oklahoma. 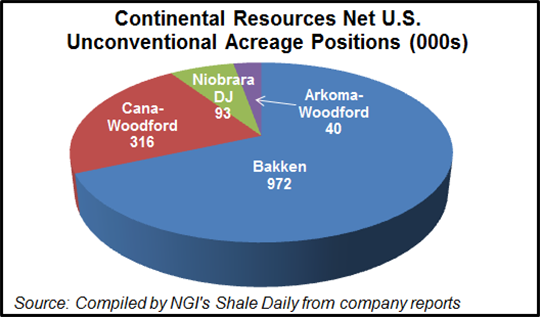 The Oklahoma City-based producer is working toward a goal to become a “super independent” within the next 10 years, CEO Harold Hamm said at a day-long investors conference Tuesday.

Continental reported average production of 94,852 boe/d in the second quarter, which was 76% higher year/year and 11% higher than in the first three months of this year (see Shale Daily, Aug. 10). At the time Hamm said Continental was “significantly ahead of plan” to hit a five-year goal of tripling output to 2014 from 2009.

The company has several pilot programs scheduled to begin in 2013 and 2014 in the Bakken that are expected to increase production even more, Hamm explained.

“In the Bakken most operators are focused on holding acreage,” said Hamm. “We have a ways to go, but most of our acreage is held by production at this point in time.” Now the company is working to expand its position and development pilot programs to drill even deeper into the Three Forks formation of the play. Continental has only penetrated the upper levels of the formation; there are three more below that could hold a bigger prize.

“We are taking everything we learned so far in the Bakken and accelerating our knowledge as we go deeper into Three Forks,” said Hamm.

In the coming year Continental should increase its output by 30-35% from this year. Plans are to drill 300 net wells, up from 286. Estimated proved reserves at the end of June totaled 610 million boe.

If Continental hits its 300,000 b/d target in 2017, “it will quickly catapult us into the sphere of the super independents,” said the CEO. “However, Continental would get there in a differentiating way. We are entirely focused on unconventional oil plays. Secondly, we have accelerated our pace compared to other people. Lastly, based on a really deep inventory and a history of success of organization and unlocking reserves, history essentially will lead us to have a considerably deep inventory of low-cost assets in very oily plays.”

Production growth over the next five years primarily is expected to be fueled by the nearly-one-million-acre-leasehold-and-growing in the Bakken Shale in Montana and North Dakota. The Anadarko Woodford Shale in Oklahoma, where the company now controls 315,675 net acres, also should be a bigger force, said Hamm.

The gains in Oklahoma are set to build on an emerging play that the company unveiled, the South Central Oklahoma Oil Province, or SCOOP, which is southwest of the legacy Cana-Woodford holdings. Based on early well tests, the thick, oily shale is expected to be a big liquids contributor in the years to come.

The management team said it plans to triple within five years the company’s production from 2012’s expected total of about 36 million boe, the mid-point of the company’s growth guidance this year, which would result in output of 108 million boe in 2017.

Next year Continental is forecasting production growth in a range of 30% to 35%, based on capital expenditures of $3.4 billion, excluding acquisitions. Based on that level of spending, the company expects to complete 738 gross (300 net) wells in 2013.

Oil differentials in 2013 are expected to average $8-11/bbl, according to Continental. Liquids-rich natural gas production is forecast to have an average premium of $1-1.50/Mcf.

To pay for all of its expansion, capital spending in 2013 is set at $3.4 billion, up from $3 billion this year. Two-thirds of the $2.9 billion set aside for drilling is to target the Bakken.

At the same time that it’s raising the spending, the company is working to cut completion costs, said COO Rick Bott. The company is attempting to trim $1 million off the average cost of a well in the Bakken by the end of 2013. The per-well costs should fall to about $8.2 million from $9.2 million over the next 12 months, Bott told investors. Those learnings then could be transferred to other plays in the portfolio.