Amid soaring prices for the import of liquefied natural gas (LNG) and a tight global energy market, Argentina’s efforts to increase natural gas output appear to be paying off. 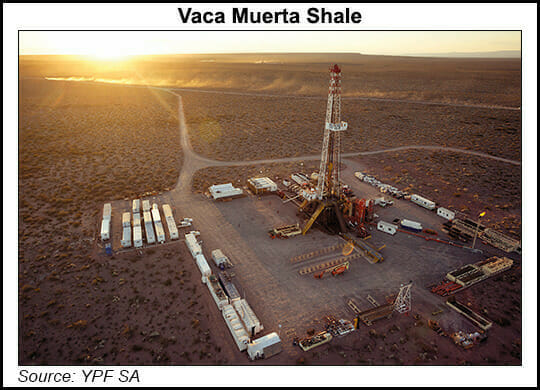 Buenos Aires-based generator and exploration and production (E&P) company Pampa Energía SA announced it would up its gas production by 60% this year. The plan is to hit 11.4 million cubic meters/day (Mm3/d) by this winter in the Southern Hemisphere, the company said.

Production increases would come mainly from new capacity in Neuquén, home to most of the Vaca Muerta shale deposit. The company is developing 20 wells at the El Mangrullo field in Neuquén, and is also constructing a gas treatment plant.

Argentina officials have been vocal about the rising cost of LNG, which is used to meet seasonal demand each winter. The market is even tighter since Russia’s invasion of Ukraine.

Vaca Muerta has been said to be geologically comparable to the Eagle Ford Shale in South Texas. To try to jumpstart E&P development from the area, the current government under Alberto Fernández has held numerous natural gas purchase tenders.

In a hydrocarbons promotion bill sent to congress in September, Argentina’s government also said natural gas would be an essential part of the country’s energy transition. The bill includes price stabilization mechanisms and guarantees that volumes produced for export will see preferential tax rates and access to capital markets.

The government has also given the green light to a new Vaca Muerta gas pipeline. The $1.5 billion, 24 Mm3/d Néstor Kirchner pipeline is to run from Tratayen in Neuquén to Salliqueló in Buenos Aires province. Officials have said the pipeline would be in operation by winter 2023.

Pampa CEO Marcelo Mindlin said the company had participated in all of the tenders and is investing $800 million in gas production. This could allow the company to “reach a new production record.”

Pampa holds leases that cover 8% of Vaca Muerta’s subsurface, the company said. The firm is also a major power producer in Argentina, with 4,970 MW of installed capacity, or about 12% of the nation’s generation fleet.

Meanwhile, executives at Argentina’s national oil company YPF SA said in an earnings call the company would allocate $3.7 billion to capital expenditure this year. This is a $1 billion increase on last year. About $2.8 billion would go to the upstream, half of which is earmarked for Vaca Muerta assets.

YPF is targeting a 5% increase in natural gas production, to 37 Mm3/d. Shale gas output would rise 40%. In January, YPF was the leading producer of natural gas in Vaca Muerta, at 15.9 Mm3/d.

Unconventional production hit a record in Argentina in January at 69 Mm3/d, up 2% from December and 42% from the same month in 2021. Overall natural gas production was 130 Mm3/d in January, up 12% year/year.

Natural gas makes up 58% of total energy consumption in the country, according to Buenos Aires-based IAE Argentine Energy Institute.