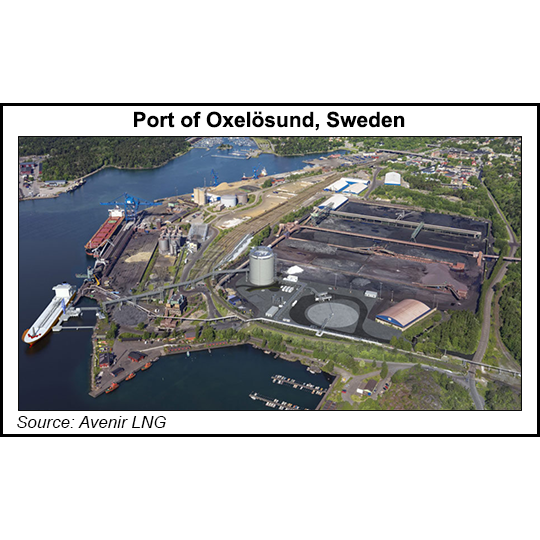 “The challenges facing the European gas markets have reinforced Avenir’s commitment to investing in critical infrastructure and supply chains which enhance energy security in regions of stranded demand and further enable the switching to cleaner, greener and more sustainable forms of energy,” CEO Peter Mackey said.

UK-based Avenir is a joint venture created in 2018 between Stolt-Nielsen Ltd., Golar LNG and Höegh LNG. The first terminal project, Higas LNG, began operations last year at the Port of Oristano in Sardinia.

As envisioned, the Oxgas terminal could allow regasification to a local pipeline network and loading LNG via two truck bays. The MOU also contemplates cooperating on renewable energy and alternative fuel projects.

While still in the design phase, Avenir management anticipates “a shorter lead time” for construction as Oxelösunds Hamnhas secured regulatory approval through its Oxgas AB subsidiary. As a part of the agreement, Avenir said it plans to acquire Oxgas.

Avenir’s Jonathan Quinn, commercial director, told NGI a first phase of the terminal is planned for a 10-15,000 cubic meter capacity with the potential to double storage levels at a later date. First liquefaction is expected in early 2025, according to the company.

Avenir would operate the terminal and use a fleet of LNG carriers to supply customers. Using the terminal as a base to consolidate marine bunkering customers in the region, the project could help European operations become more efficient, it noted.

Designing a terminal that also could be compatible to use RNG would also fit into the plans of steel manufacturer SSAB AB, one of the port’s tenants. SSAB plans to transition to “fossil-free steel” by 2045.

SSAB is installing a natural gas blast furnace at the Oxelösund harbor facility to use RNG. The company’s operations in Finland, Sweden and the United States have an annual steel production capacity of around 8.8 million tons, according to the company.

Oxelösunds CEO Douglas Heilborn said the port was preparing LNG and alternative fuel demand to “grow in the shipping industry within the Baltic Sea. A key component for sustainable shipping is developed infrastructure for such fuels.

“Having access to terminals is important as it will create opportunities for new shipping solutions.”