Following a supply deal in April, Italy plans to reduce reliance on Russian fossil fuels by investing in Algeria’s natural gas and green hydrogen and by expanding its import infrastructure with two floating storage and regasification units (FSRUs). 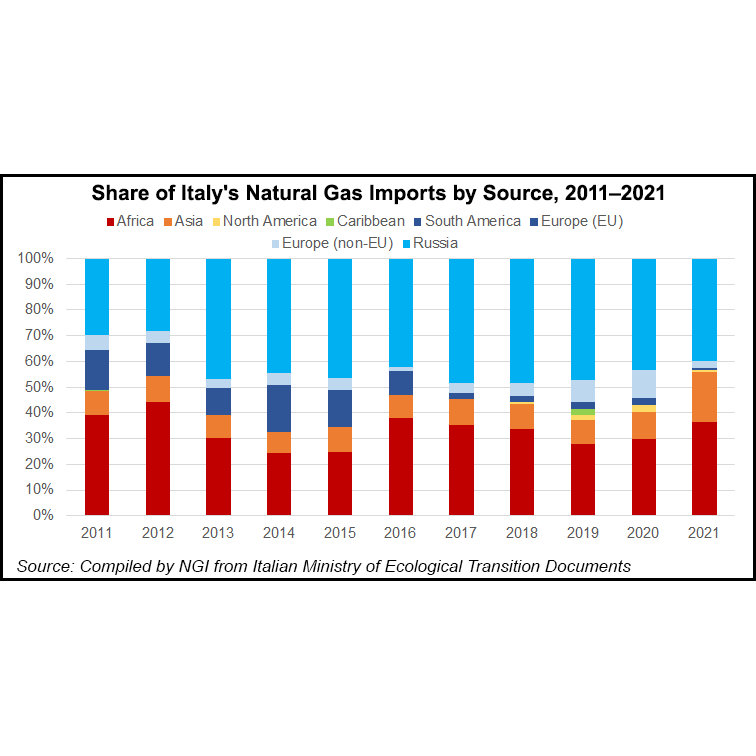 Italy is one of Europe’s largest natural gas consumers. It has three LNG import terminals with a capacity of 10.9 million metric tons/year (mmty), but “more regasification capacity in Italy is needed, so it is not surprising that FSRUs are being leased,” researcher Marco Giuli of the Brussels School of Governance in Belgium told NGI.

Italy’s Snam SpA agreed to lease two FSRUs from Golar LNG Partners LP. One of those, the Golar Tundra, would be located in North-Central Italy close to areas of high gas consumption.

The second vessel, the LNG carrier Golar Arctic, is to be converted into an FSRU over two years. It would be located in Portovesme, Sardinia, to supply the island with gas.

In April, Italy’s Eni SpA also signed a deal with the Democratic Republic of Congo to increase natural gas supply and export by 4.5 billion cubic meters (Bcm) annually beginning in 2023. Eni also signed a similar contract for between 1-1.5 Bcm/year from Angola. Eni holds stakes in both the Angola and Congo LNG projects. Eni could also reportedly export 3 Bcm of LNG from Egypt’s Damietta plant this year.

“Italy is so much geared towards gas diversification that its energy system is extremely dependent on gas, and only limited alternative fuel capacity is available,” Giuli said. “So Italy has few alternatives to gas in the short term, even for basic power generation.”

Italy imported 29 Bcm from Russia last year, or nearly 40% of its total gas imports. Algeria came second with 22.6 Bcm, or 31% of total imports, and the remaining 30% came from Azerbaijan, Qatar, Libya, and Norway, according to data from Italy’s Ministry of Ecological Transition.

To reduce dependency on Russian gas supplies following the invasion of Ukraine as others across Europe are doing, Algeria’s Sonatrach and Eni agreed to a supply deal in April. Algeria would deliver an additional 9 Bcm of gas in 2023 and 2024 via the Transmed Pipeline.

But the Transmed system connecting Algeria and Italy is not operating at full capacity. Algeria has had production issues. The country has not invested in new infrastructure to increase production in the past three decades, and it needs to divert gas to meet increasing domestic demand for electricity.

“The additional 9 Bcm from Algeria by 2023 is unrealistic, especially considering that Algerian supplies to Italy increased by 80% between 2020 and 2021, Giuli said.

Giuli said a large increase by 2023 can only occur if there is a diversion of flows from Spain to Italy. Algeria’s relations with Spain have been strained because Spain has sided with Morocco over a land conflict in the Western Sahara.

“This has reverberated already on regional gas flows, but hasn’t yet reached the stage where Algeria intends to break its supply commitments to Spain,” Giuli added.

In addition to the April supply agreement, Sonatrach and Eni agreed last month to sign a memorandum of understanding to jointly invest in natural gas and green hydrogen. Part of the agreement may include financing from Italy, according to Algerian news reports.

Instead of looking to replace Russian gas by increasing pipeline and LNG imports, Italy should focus on trying to reduce its gas consumption, said Europe energy analyst Ana Maria Jaller-Makarewicz, of the Institute for Energy Economics and Financial Analysis.

Jaller-Makarewicz cited data from the Ministry of Ecological Transition that showed 45% of the gas consumed in Italy was from residential and commercial customers in 2020, while 35% was from power generation and 19% was from industries.

“With energy efficiency, gas demand management strategies and increasing renewable generation, Italy could see a great reduction on its gas consumption and this could help decrease its dependency on Russian gas and on gas a as a whole,” she told NGI.

“Gas diversification can only be a very partial solution,” Giuli added. “ To replace all 29 Bcm of Russian gas imports, a full replacement can only involve significant efforts in demand side measures and renewable energy development.”