New Fortress Energy Inc. (NFE) has reached an agreement for liquefied natural gas (LNG) supply through 2027 for most of its import terminals and power generation facilities. 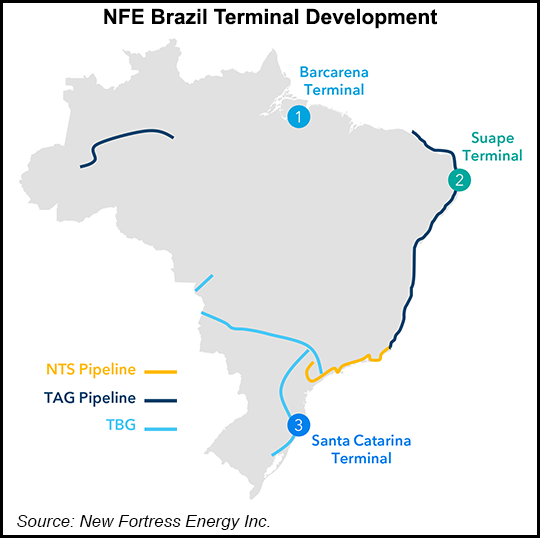 The company has nine import terminals in operation or under development in the Caribbean, Central America, Mexico and South America. It imports LNG in underserved markets where it’s utilized for power generation and other energy needs. The agreement, NFE said, covers 100% of its expected needs across terminals in the Caribbean, Central America and Mexico.

NFE plans to secure additional LNG supply volumes later this year for terminals in Brazil that are expected to be operational in 2022. The company did not provide details about the supply contract or costs related to it.

The news comes amid a tight global LNG market and rising natural gas demand in South America. Some of this new demand is pulling Atlantic cargoes away from Europe, contributing to a surge in European energy prices.

According to ClipperData, U.S.-to-South America LNG cargoes in the first half of the year more than doubled, outstripping increases to Asia and Europe. Through June 23, 58 U.S. cargoes went to South America, compared with 21 in the comparable period in 2020.

LNG imports are up 60% in Brazil this year, according to consultancy Timera Energy. Brazil relies on hydroelectricity for the bulk of its power supply but is in the midst of a historic drought, fueling LNG demand. Business-friendly regulation in the natural gas sector is also opening the market to new players.

In Argentina, natural gas buyer Integración Energética Argentina, or Ieasa, launched its fifth tender last week for LNG cargoes for supplies for the ongoing winter in the Southern Cone.

On Tuesday, LNG injected into Argentina’s national grid was 21 MMcm from the Escobar terminal and 15.5 MMcm from Bahía Blanca, according to information from the country’s natural gas regulator Enargas. This is about 75% higher than at this time last year, according to Enargas data.

Meanwhile, in Chile last week natural gas distributor Metrogas SA sent notice to 300 industrials that their natural gas supplies would be interrupted because of the late arrival of an LNG vessel at the Quintero terminal.

The Chilean Energy Ministry said on Friday (July 9) the emergency had been avoided when the vessel made it to port. Neighboring Argentina had also offered to send pipeline volumes to Chile to make up for the shortfall.

Numerous nations in Latin America have turned to LNG to secure supply amid infrastructure and political shortfalls. One country that is bucking the trend is Mexico. The country’s LNG imports fell by 62.1% year/year to 2.5 Bcm in 2020, according to BP plc, as imports from the United States via newly commissioned pipelines took up market share.

Earlier this year the company expanded its Brazilian presence when it acquired Golar LNG Partners LP and Hygo Energy Transition Ltd. in a deal valued at $5 billion. In the first quarter, average daily LNG sales volumes increased to 1.4 million gallon/day, up from 750,000 gallon/day in the year-ago period.

With additional reporting by Christopher Lenton