The cost of supplying U.S. liquefied natural gas (LNG) to Asia has spiked this year, but with a shortage of natural gas to meet widespread demand across the world, that is likely to have little impact on output that is expected to reach record highs. 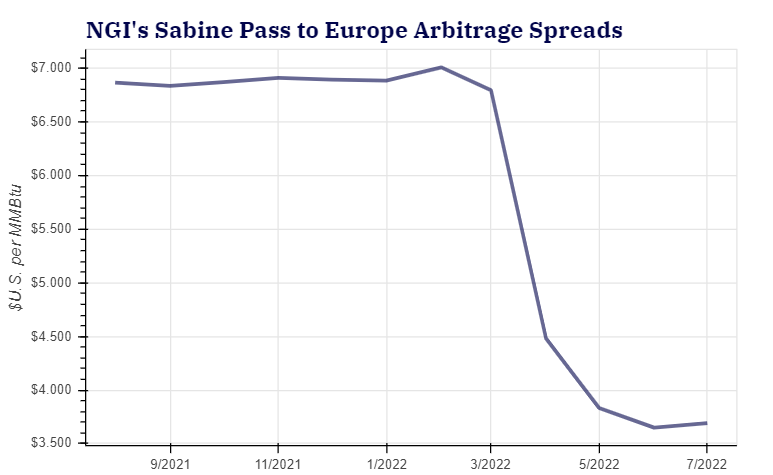 The SRMCs of liquefaction facilities across the world have jumped across the board due to higher maritime transportation and fuel costs, Rystad said. Charter rates have been on the rise in recent months as tonnage has been stretched thin by abnormally high demand in Europe, Asia and South America.

Data from shipbroker Braemar ACM shows that spot LNG charter rates jumped by 31% between April and May. They could go higher as congestion continues in the Panama Canal, the preferred route of vessels making their way from the U.S. to Asia.

But natural gas prices in Europe and Asia, where front-month benchmarks are trading around $11, are incentivizing LNG suppliers to ramp up production.

“At these price levels, every source of supply should be switched on, whether it’s gas or LNG,” said Oleg Vukmanovic, head of business intelligence at Poten & Partners. “U.S. supply is in the money on a full cost basis. Egyptian supply, which has more or less a $5/MMBtu breakeven, should also be on, but they’re experiencing some issues.”

Rystad noted that Egyptian LNG has become the marginal supplier of LNG to the world’s buyers as its production costs are highest. Its return to the market follows a rise in prices after global lows last year amid a supply glut and demand destruction caused by the pandemic.

When Asian and European natural gas prices fell below $2 during the slump last year, the United States was the world’s most expensive supplier — partly due to the longer distances it takes to move the super-chilled fuel overseas. Rystad estimates that roughly 12 million tons (Mt) of U.S. LNG was shut-in during 2020.

“We do not see any signs of LNG shut-ins in 2021, but we do see a shift in the SRMC of global LNG and in the cost-of-supply curves,” said Rystad’s Sindre Knutsson, vice president of the firm’s gas markets team. “Instead, U.S. LNG production will reach 72 Mt in 2021, its highest annual level on record, under an assumption of no shut-ins.”

U.S. exports have fallen in June from the prior month due to maintenance at the Cameron, Freeport and Sabine Pass terminals. But they’re likely to rebound in July when that work concludes. Forward gas prices that are holding strong against oil-indexed supplies are also likely to further incentivize U.S. shipments through the remainder of the year.

A tight winter is shaping up too, which could send prices soaring. European storage inventories remain low at 45% of capacity, compared to 78% at the same time last year. Upcoming maintenance on the Nord Stream, Yamal and Turk Stream pipeline systems serving the continent are likely to further limit supplies.

Norway recently ended maintenance early to get more pipeline imports flowing to Europe, but Russia has limited its deliveries to the continent this year as it prepares to bring on the Nord Stream 2 system. It’s also curbed supplies through Ukraine as tensions have increased between the two countries.

Strong chinese buying, coupled with efforts to better prepare for winter in Asia after historic cold and a shortage of supplies last year, has driven strong demand in Asia and created competition with Europe for LNG cargoes. Meanwhile, in South America, the southern hemisphere winter and drought are driving more LNG purchases.

“At the same time, there are quite a lot of unplanned outages and maintenance issues affecting LNG production, so not all producers are able to take advantage of this rally,” Vukmanovic said during a recent webinar hosted by Poten & Partners.

Given demand, U.S. LNG exports to Asia, Europe and South America have skyrocketed. According to ClipperData, the U.S. sent 139 cargoes to Europe through June 23, up from 122 over the same time last year. U.S. LNG shipments to Asia soared from 102 to 196 in that time, while 58 U.S. cargoes have been delivered to South America, up from 21. NGI data shows that the spread for LNG cargoes between the Gulf Coast and Asia, after variable costs for those with vessels chartered to cover expenses for fuel, boiloff and port fees, is at or above $8/MMBtu through the remainder of the year. The spread to Europe is at nearly $7 over the same period.