Production in the Marcellus Shale over the past few years “has been nothing short of epic,” and it is straining infrastructure to the point that the Appalachian region is in need of larger interstate connections, said Genscape Inc. senior natural gas analyst Andy Krebs. 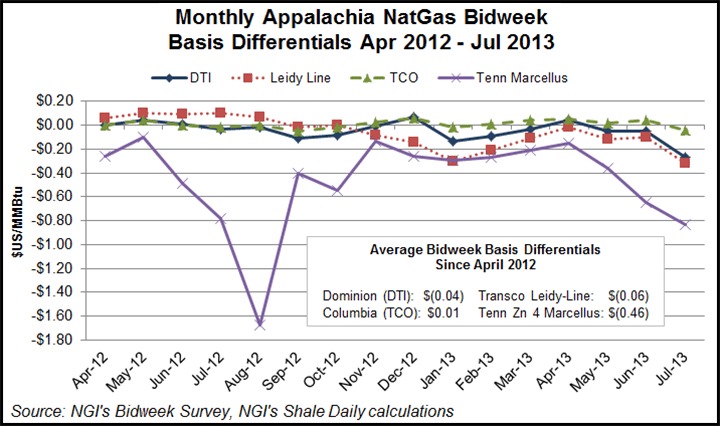 “The import-export capability in the Appalachian region is really starting to feel tapped out,” Krebs told NGI’s Shale Daily. Analysis of the region, including compressor station flows on Transco, indicates that “we have displaced all gas that we potentially can; we have pushed back everything that we can to Canada. In fact, we’re exporting out of the Niagara Spur now; there’s no import volumes from Canada. There’s really no import volumes on Tennessee, Tetco and Transco, and in particular this spring, we’ve seen a big pushback on Transco and Tetco. And then on top of that we’re pushing back as much volume as we can for the Midwest.

“For a while, we’ve been OK in that we could continue to build or grow production without doing big interstate pipeline expansions because all you had to do was shut off production from other regions. I think that’s coming to an end, and that there’s greater potential for a need for an interstate expansion, for an export project of some sort, aside from Niagara Spur.”

The Niagara Spur Line in New York is part of Tennessee’s 300 Line system, which provides producers with takeaway capacity from the Marcellus (see Shale Daily, Oct. 2, 2012).

But despite gains in pipeline capacity additions and shale-driven gas production in the United States since 2005, the greater New York metropolitan area, and especially New England markets, still experience frequent constraints. Coupled with declining production at Sable Island in Nova Scotia and limited liquefied natural gas deliveries into the Northeast, the result has been much higher gas prices at certain trading points in the Northeast compared to the rest of the United States (see Daily GPI, Jan. 23). And the Deep Panuke natural gas production facility offshore Nova Scotia is “closer to natural gas production, but not quite there yet,” an Encana Corp. spokeswoman said recently (see Daily GPI, July 3). The facility was to have achieved first gas production at the end of June, more than two years late, but awaits final commissioning.

And while there’s been a flurry of activity to move natural gas around the Marcellus, more needs to be done to expand the potential market, Krebs said.

“The way that the producers have approached the Marcellus in investing in gathering systems and small projects that get them to different pipes within the Marcellus has created this ‘price pocket’ phenomenon, which we most recently saw with Dominion, where when they connected up a large gathering and processing facility, it flooded the system and prices got crushed.

“We’re seeing the same thing with the cash markets, around Transco-Leidy and Tennessee Zone 4…there’s no basis product that’s directly connected to those cash product definitions. For some people, it’s gone unnoticed that those two points have been trading a dollar below the rest of the Northeast or the Appalachian area…I think those price pockets are going to be very interesting to watch because it’s going to force producers to start investing in either bigger infrastructure projects to get to a different pipeline — maybe the one that isn’t right next door, but maybe the second generation project — or it’s going to spawn a real need for a true interstate infrastructure development.”

Basis differentials into Tennessee Zone 4 Marcellus have been extremely weak and volatile since April 2012, but now Dominion and Transco-Leidy line are getting into the act, according to NGI‘s Bidweek Survey. Those latter two pipelines, which like Tennessee Zone 4 serve the Northeast Pennsylvania part of the Marcellus Shale, posted July 2013 basis differentials of negative $0.27 and negative $0.32 cents, well below their respective averages of negative $0.04 and negative $0.06 cents since April 2012. Even Columbia Transmission, which serves the Southwestern Pennsylvania and West Virginia portion of the Marcellus, posted a negative basis differential of $0.04 in July, after being in positive territory for most of the previous year.

What’s ahead for Appalachian natural gas? “The area appears to be rapidly approaching supply saturation and the need of compression turnaround to enable producers to be able to export new volumes,” Krebs said. “Until those improvements are made, we expect to see continued price weakness in the Appalachian area as infrastructure development is needed to find a home for additional growth in Marcellus production. The weakness will likely be concentrated in areas with large connections to the Marcellus and Utica production growth…As for prices, we think that current pockets of price weakness will continue due to lack of capacity.”