After fetching $4.61/Mcf for its Permian Basin natural gas in the first quarter, APA Corp. is stepping up its activity in some prospects and extending its exploration in Texas, executives said Thursday. 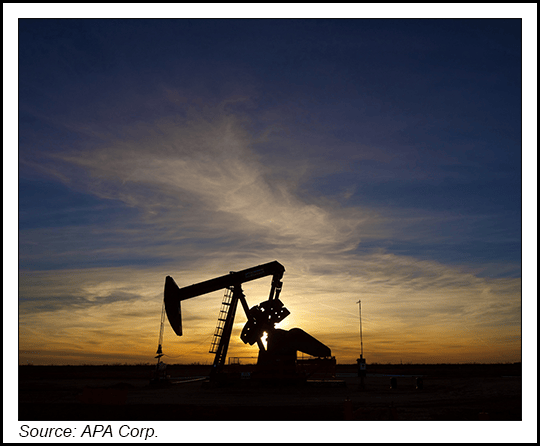 The gassy Alpine High development in the Permian Delaware sub-basin of West Texas had been the Houston-based explorer’s No. 1 global play. As gas prices stagnated and oil prices strengthened, more capital was moved to Egypt, the North Sea and offshore Suriname.

Still, with prices on the rise early this year, CEO John Christmann IV had said in February the Alpine High and other U.S. prospects were likely to see more love in 2021.

“We made excellent progress during the first quarter with regard to our top priority of free cash flow generation and net debt reduction,” Christmann said during the quarterly conference call Thursday.

“We performed well relative to our production expectations,” with “good capital and cost discipline,” even with the “challenging weather events” during February’s deep freeze.

The challenging weather, however, proved a boon for Apache, which in March became an APA subsidiary.

What happened was fortuitous, as the marketing team revamped the gas hedging strategy at the end of January, which led to a $147 million gain. APA’s exposure to the gas spot market was increased, as marketing entered into financial contracts that boosted exposure for the month of February to daily gas pricing, while reducing exposure to first-of-month pricing.

Spot electricity and gas prices in Texas then hit record highs in February on the extreme weather.
CFO Stephen Riney during the conference call explained that all of the Permian gas production is sold “and then we manage our long-haul transport obligations separately. We optimize those obligations through the purchase, transport and sale of gas from various receipt points in the Permian Basin and in the Gulf Coast areas.

“Our common practice, as we contract for the purchase and sale of gas, is to maintain a relatively balanced exposure between gas daily and first-of-month pricing. As the end of January approached, we had a portfolio of purchase-and-sales contracts that were heavily skewed to February first-of-month pricing. As we commonly do, when this is the case, we use financial contracts to rebalance that exposure closer to 50-50.”

Prices Up, Output Down

Christmann said the company “exceeded” its U.S. oil production guidance by 6%. Weather-related downtime from Uri reduced total output by 14,000 boe/d, and an estimated 5,000 boe/d remained shut in at the end of March.

In late January a rig was reactivated from standby to work in the southern part of the Permian Midland sub-basin. In addition, a four-well drilling program in Texas was launched in the Austin Chalk formation in Brazos and Washington counties.

International volumes overall were down 7% year/year at 172,210 boe/d. The only rise in volumes was in Egypt, where gas production increased by 9% from 1Q2020.

In addition, APA this week agreed in principle with Egypt’s Ministry of Petroleum and Mineral Resources and the Egyptian General Petroleum Corp. “with regard to a modernized production sharing contract,” Christmann noted.

“Looking ahead, our full-year 2021 guidance is unchanged, and we have clear visibility into at least $1 billion of free cash flow generation for the year, the vast majority of which will be directed to reducing net debt,” he said.