It’s likely no producer is more eagerly awaiting the start up of the natural gas savior of the Permian Basin, Gulf Coast Express (GCX), than Apache Corp., as deferrals continue to mount from its prized Alpine High. 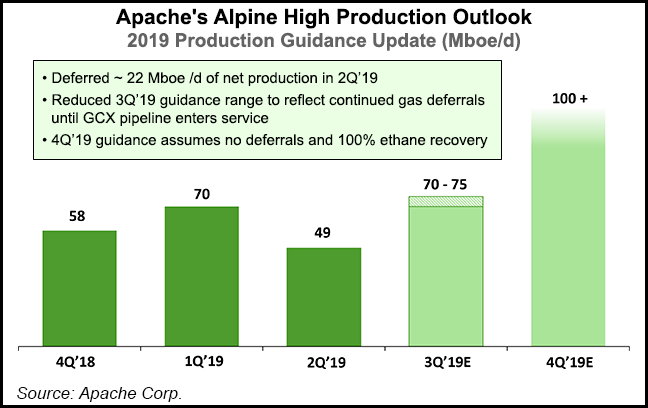 In late March, Apache began shutting in about 250 MMcf/d gross from the play in West Texas because of extremely low gas prices at Waha, which has traded on and off in negative territory for months.

Apache’s overall output from the massive Permian play still performed in 2Q2019, with total production averaging 226,000 boe/d. However, Permian natural gas output overall fell 22% from a year ago and was down 20% sequentially to 492,199 Mcf/d. Alpine High output averaged 49,000 boe/d, with gas deferrals averaging around 22,000 boe/d.

A similar amount of lean and rich-gas volumes continue to be deferred until GCX comes alive, expected to ramp toward the end of September, moving volumes to the Texas coast and beyond.

“We responded quickly to weak Waha and El Paso Permian gas prices and deferred production at Alpine High,” CEO John Christmann IV said. “While total Permian production volumes were strong, oil volumes trailed guidance due to timing delays bringing wells online during the quarter. We will catch up in the second half of 2019 and exit the year with oil production on plan and with strong momentum heading into 2020.”

The recent gas deferrals and other infrastructure delays in the Delaware and twin Midland have led Apache to reduce its 3Q2019 production forecast for the overall Permian to 94,000-98,000 boe/d. Alpine High output has been reduced to 70,000-75,000 boe/d.

Assuming the deferred gas production is back online by the beginning of October, when GCX is in operation, total Permian production in 4Q2019 should average 100,000-105,000 boe/d, with Alpine High alone producing 100,000 boe/d-plus.

The second quarter losses stung, amounting to $360 million (minus 96 cents/share), compared with year-ago profits of $195 million (51 cents). Net cash provided by operating activities was $856 million versus $1.11 billion a year ago.

One reason for the turnaround in profits was the turnaround in Permian prices. Apache’s Permian natural gas fetched an average price of 26 cents/Mcf in the quarter, compared with $1.85 in 2Q2018. Permian oil’s realized average was $56.79/bbl, versus $62.29, and average natural gas liquids prices fell by almost half to $13.12/bbl from $26.97.

The super independent’s leverage to West Texas Intermediate and Brent oil prices “offset the impact of very weak natural gas and natural gas liquids prices,” Christmann said. The company has balanced its “quarterly investment pace, and through June 30, have invested slightly less than half of our 2019 upstream capital budget. For the full year, we anticipate spending at or below our $2.4 billion budget.”

During the second quarter Apache operated on average 12 rigs in the Permian and drilled and completed 54 gross-operated wells. Within the Midland, four rigs were running, with 20 wells placed on production. A 30-day delay to commission a new electric-powered fracture fleet delayed production from nine wells.

Three rigs on average ran in the Delaware between April and June, with nine wells tied to sales. Within Alpine High, which is in the Delaware, the company averaged five rigs and two fracture crews. Twenty-six wells were tied to sales, with around half late in the quarter. A few still were in the early clean-up phase at the end of June.

Apache continues to deliver cost reductions in the Alpine High, with average drilling costs down 26% and completion costs falling 41% through the end of June versus 2017.

Upstream oil and gas investment was $589 million in 2Q2019. Full-year capital spending remains in line with guidance of $2.4 billion.

“Our objectives for the second half of 2019 include managing capital investment to a level at or below our full-year budget of $2.4 billion, increasing Permian Basin oil well completions and oil production, continuing to drive capital and operating efficiencies into our business, and enhancing our opportunity set through high-impact exploration initiatives in Suriname and the Lower 48,” Christmann said.