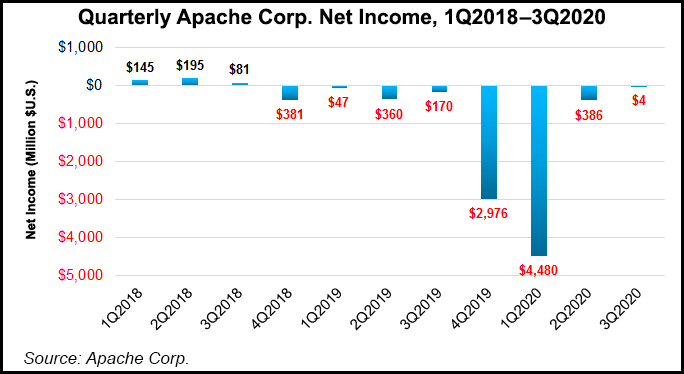 Christmann led a conference call to discuss the quarterly results for the global independent, which has put a lower priority on its Lower 48 fields to concentrate capital in international prospects, most notably Suriname.

The gassy Alpine High development in West Texas, until recently the independent’s No. 1 global field, is seeing more activity of late as prices have moved higher, Christmann said.

“Given the very favorable service cost environment, Apache recently commissioned two fracture stimulation crews” for the Permian to begin finishing up an inventory of drilled but uncompleted (DUC) wells.

The DUC activity may have “only a nominal impact” on spending in 4Q2020, as Apache is going to be cautious with capital into the coming year. Capital expenditures for this year are expected to be around $1 billion, lower than initially forecast.

No plans are in the pipe for “sustained” exploration and development in the Permian, Christmann told investors. Apache suspended Permian activity in April as energy demand collapsed under the weight of Covid-19.

“Looking ahead to 2021, we anticipate an upstream capital budget of $1 billion or less,” based on a West Texas Intermediate oil price of $40/bbl and a Henry Hub natural gas price of $2.75/Mcf, Christmann said.

“In this price environment, our capital allocation priorities will be similar to 2020. Our DUC completion program should stabilize Permian oil volumes at a level consistent with 4Q2020 levels, while Egypt and the North Sea will likely see modest declines.”

Otherwise, Apache “has strategically chosen to direct a significant portion of our upstream capital investment to our large-scale opportunity in Suriname,” where Apache partners with Total SE. “In this price environment, we believe this will create more value for our shareholders over the long term than directing capital to short-cycle projects that would generate near-term production growth at relatively lower returns.”

The “significant macro headwinds continue to persist,” Christmann said. “We are prioritizing long-term returns over growth, generating free cash flow, strengthening our balance sheet through debt reduction and advancing a large-scale opportunity in Suriname.”
Capital is being allocated “to the best return opportunities across our diversified portfolio, aggressively managing our cost structure, and progressing important emissions reduction” under the umbrella of environmental, social and governmental initiatives.

Total production in 3Q2020 was 445,000 boe/d, nearly flat from the second quarter. Investments of $141 million were nearly all directed to the international plays.

An organizational makeover launched last fall has delivered estimated annual run-rate cost savings of around $400 million, up 33% from an initial estimate.