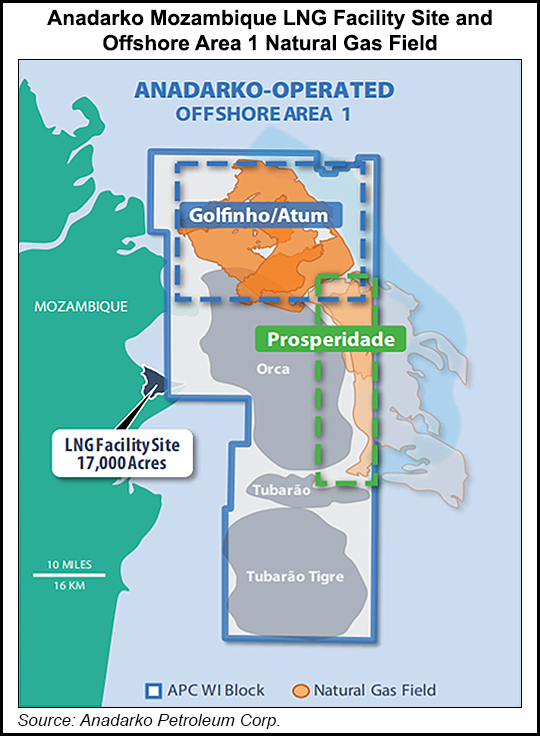 The SPA with CNOOC Gas and Power Singapore Trading & Marketing Pte. Ltd. is for 1.5 million metric tons/year (mmty) of liquefied natural gas (LNG) for 13 years, making it a foundational customer for the project underway by Mozambique LNG1 Co. Pte. Ltd.

“This deal gives China’s largest LNG importer access to Mozambique LNG’s world-class gas resources, which are strategically located off the East Coast of Africa, and will provide China with a clean source of energy for years to come,” said Anadarko’s Mitch Ingram, executive vice president of International, Deepwater & Exploration.

“This agreement adds to our growing list of customers in the Asia-Pacific region, demonstrating the excellent progress we are making toward our stated goal of taking a final investment decision during the first half of this year. We expect to announce further SPAs in the near future.”

The Anadarko-operated Mozambique LNG project would be the country’s first onshore gas export development, initially consisting of two trains with total nameplate capacity of 12.88 mmty. The project would support development of the Golfinho/Atum fields within Offshore Area 1.

Last year Anadarko signed a heads of agreement (HOA) with Tokyo Gas Co Ltd. and Centrica LNG Co. Ltd. to deliver 2.6 mmty from the start-up of production from the project until the early 2040s. It also has an HOA with Tohoku Electric Power Co. Inc., one of Japan’s leading LNG buyers. Anadarko has said it needs enough off-take contracts for the project to reach FID.

Forty-six projects in 23 states, including ones to support carbon capture processes, are set to receive funding from the Department of Energy’s (DOE) Office of Energy Efficiency and Renewable Energy (EERE) to stimulate technological innovation and improve energy productivity.  The total funding, estimated at $123.6 million, along with $44.7 million in cost sharing by states,…