West Virginia legislators went home for the rest of the year Tuesday without acting on Gov. Joe Manchin’s proposed legislation that sought to rewrite the state’s royalty law.

The contentious measure never even made it out of the House and Senate judiciary committees, with lawmakers saying the issue was too complex to deal with in the abbreviated three-day special session. Manchin may re-present the legislation when the Legislature returns for its next session on Jan. 9. However, there may be some changes, a governor spokesman said.

The royalty bill (HB 216, SB 2008) drew objections from landowners and raised the concern of lawmakers. It sought to “rewrite the state’s royalty law retroactively to say that there is an ‘implied covenant’ in oil and natural gas leases that allows companies to deduct reasonable post-production costs when calculating royalties, and apply this new covenant retroactively — this in light of the fact that the state’s largest natural gas company has been ordered to pay [$404] million in damages to about 10,000 owners of natural gas rights who contended they had been underpaid,” the Charleston Daily Mail reported.

The goal of the legislation was to make the payment of royalties under leases “as transparent and predictable as possible,” and to limit future jury verdicts such as the $404 million one imposed on NiSource Inc. for underpayment of royalties, said Carte Goodwin, general counsel to the governor.

In June, NiSource Inc. lost an attempt to overturn a $270 million punitive damage award that topped off $134 million in compensatory damages for underpayment of royalties in West Virginia (see Daily GPI, June 29). A Roane County, WV, judge ruled against a motion to set aside the punitive damages portion of the jury verdict that was issued in January (see Daily GPI, Jan. 30). 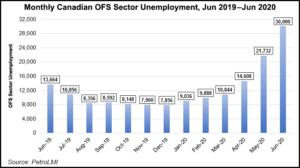 Employment continued to shrink during June in Canadian oil and natural gas fields, with service and supply contractors suffering the deepest losses, according to the industry’s workforce monitoring agency. Cuts of 5,600 field personnel accounted for 84% of 6,700 layoffs recorded last month by Calgary-based Petroleum Labor Market Information (PetroLMI) from Statistics Canada surveys. The…