France’s Total SE plans to base its growth strategy on liquefied natural gas (LNG) and renewable electricity during the 2020-2030 period and propose a name change to shareholders to reflect the shift in focus, management said Tuesday. 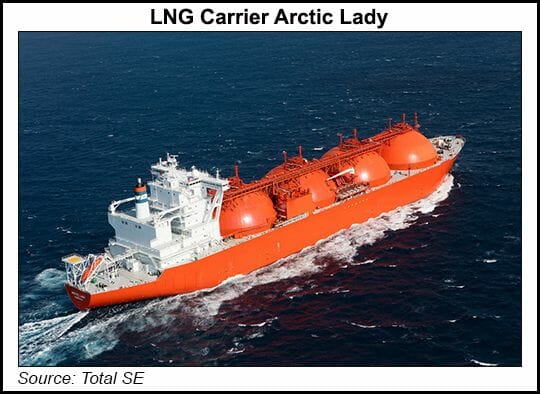 “The writing is on the wall,” said CEO Patrick Pouyanné upon presenting the major’s 2020 earnings to analysts and shareholders. “Clean, low-carbon energy is the future.”

In line with the transition, management is to propose a name change to TotalEnergies at the group’s next annual shareholder meeting on May 28.

“This name is consistent with our social values and ambition to achieve net-zero emissions by 2050 or sooner,” Pouyanné said.

As Total grows its LNG and renewables businesses, the company expects oil products to fall from about 55% of sales to 30% by 2030.

Pouyanné highlighted that while global energy and oil demand fell by 5% and 9%, respectively, in 2020 amid a pandemic and economic crisis, demand for LNG and renewables continued to grow. Demand for LNG rose 3%, while demand for wind and solar energy swelled by 13%.

“This confirms the role of these two markets in the ongoing transformation of our energy systems and as key growth pillars for Total,” said Helle Kristoffersen, president of strategy and innovation.

For Total, LNG sales in the fourth quarter fell 6% year/year to 10 million tons (Mt), but for full-year 2020, sales rose by 12% to 38.3 mt. The growth was attributed to the startup of three production units at the Cameron LNG facility in the United States, the ramp-up of Yamal LNG in Russia and Icthys LNG in Australia, and increased trading activities, management said.

The first train at the Arctic project was 45% complete at year-end; engineering, procurement and construction contracts were awarded for the Nigeria project in May 2020; Mozambique LNG was 21% complete as of December and continued to progress despite security concerns; and ECA was sanctioned in November.

Pouyanné said the loss was driven mainly by impairments of about $10 billion, mostly at the company’s high-cost Canadian oilsands assets. The writedown of the carbon-intensive oilsands acreage is consistent with Total’s climate ambitions, Pouyanné said.

Total added 10 GW of renewable capacity to its portfolio in 2020, and started 2021 by acquiring a 20% stake in Adani Green Energy Limited, the largest solar developer in the world.

Total plans to have 35 GW of gross renewable capacity in operation by 2025. Of this total, more than 20 GW is already backed by long-term power purchase agreements.

Total’s 4Q2020 net income was up more than three-fold from the previous quarter. Pouyanné attributed the rebound to oil prices stabilizing above $40/bbl thanks to “strong…discipline” from the Organization of the Petroleum Exporting Countries and its allies, aka OPEC-plus, as well as as a sharp rise in natural gas prices in Europe and Asia.

OPEC-plus members have strategically curbed oil output to balance the global market since demand collapsed last year as a result of the pandemic.

Pouyanné cited “two major crises” affecting the company in 2020: the Covid-19 pandemic and a massively oversupplied oil market that saw the Brent crude price drop below $20 during the second quarter.

Oil output fell 15% year/year to 1.24 million b/d in 4Q2020, with full-year production declining 9% to 1.3 million b/d. Pouyanné said the decline was mainly because of the OPEC-plus production quotas to boost prices, which he said Total fully supports.