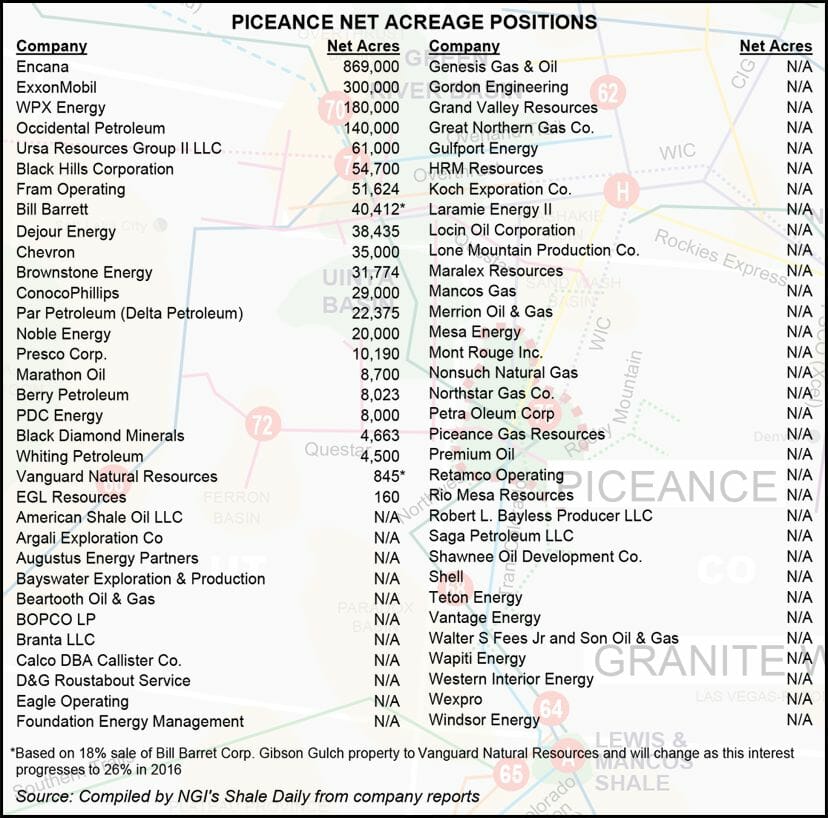 The Tulsa-based producer said initial production results from a well drilled in Garfield County hit a high of 16 MMcf/d and flowed at a pressure of 7,300 pounds per square inch (psi). The well has since been choked back and has been producing at an average rate of 12 MMcf/d for the last 30 days, it said.

“Based on the early indications from this Piceance discovery, we’re talking about the potential to ultimately more than double our current 18 Tcfe of 3P reserves,” said CEO Ralph Hill.

According to company reports, drilling operations at the horizontal test well began last August and were completed in December. Seventeen hydraulically fractured-stages were used, and a 535-foot continuous core sample was retrieved. The well was drilled to a total vertical depth of 10,200 feet and has a lateral measuring 4,600 feet.

The horizontal drilling test followed a vertical test well in late 2011, the company noted. Results from the first vertical well “yielded the impetus for drilling the first horizontal well to gain additional data about the productivity of the formation.”

WPX holds about 180,000 net acres of leasehold in the Niobrara and has drilled more than 4,000 wells in the Piceance, mostly in the tight sandstones of the Williams Fork formation.

“We know the Piceance is a world-class asset,” said Hill. “Now the results of our Niobrara well are showing that our acreage has even greater reserves potential.”

WPX plans to drill at least two more horizontal wells targeting the Piceance in 2013, depending on when it receives necessary permits. The new wells are to be drilled within a six-mile radius of the first horizontal test well.

“This additional work will help WPX evaluate how productive the formation is across the basin,” the company said. “Other operators also are delineating the extent of the resource on the eastern and western margins of the basin.”

WPX is the third largest acreage holder in the Piceance, trailing only Encana (869,000 net acres) and ExxonMobil (300,000 net acres). Rounding out the top five are Occidental Petroleum with 140,000 net acres and Ursa Resources Group II LLC with 61,000 net acres.

WPX was spun off from Williams at the end of 2011 to become an independent explorer. The company, now among the top 10 natural gas producers in the United States, holds 5.2 Tcfe in natural gas, oil and NGL reserves.

Anticipated delays in developing liquefied natural gas (LNG) export projects in Mozambique could cause the market to tighten even more than expected later this decade, with forecasts flipping from surplus to deficit in 2029, according to a new report from Rystad Energy. The Norwegian consultancy said it now expects a supply deficit of 5.6 million…