Construction of Royal Dutch Shell plc’s multi-billion dollar ethane cracker in western Pennsylvania is about 70% complete, while the 98-mile pipeline system that would feed the facility is 95% complete, a company executive said Tuesday, noting that the Covid-19 pandemic has complicated the project. 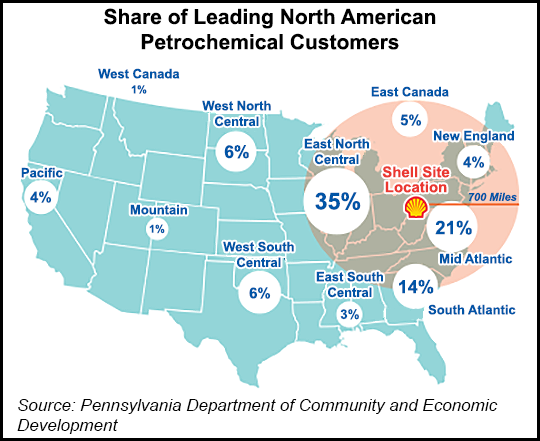 “All of the major equipment is up, all of the modules that have been built around the world both in the U.S. and overseas have been placed on the site,” said Hilary Mercer, vice president of Pennsylvania Chemicals for Shell Polymers. “So, what remains is to join those things together, to weld everything together, and to pull the electrical cables and instrument cables in order to allow us to liven up the facility.”

The facility, the first of its kind to be built in the United States outside the Gulf Coast in more than 20 years, was sanctioned in 2016 to take advantage of Appalachian ethane supply and a strong polyethylene market in the region. Construction started about three years ago and site preparation got underway well before that. The facility is under construction in Beaver County, about 30 miles northwest of Pittsburgh, and will be largely self-sufficient with its own natural gas-fired power plant and water treatment facility.

Some of the utility systems are already being commissioned and the power plant is expected to start up early next year, Mercer said during remarks she delivered at the virtual Shale Insight conference.

Shell was forced to temporarily suspend construction of the project earlier this year amid the coronavirus outbreak as a precaution to protect the workforce and local community given the number of those on site. When work was stopped in March, Mercer said the workforce numbered about 8,000 people.

Construction has resumed, but it remains unclear when the facility will enter commercial service. Even when work is completed, commissioning activities are expected to be lengthy, Mercer said. The company has said in the past that it expects the facility to enter service sometime in the early 2020s. While Shell doesn’t typically discuss its schedules for such projects, Mercer said the pandemic has clouded the timeline.

“We had to convince ourselves that we could keep a workforce of 6,000-plus people working and working consistently through” the pandemic “before we could even start to think about how that would look in terms of our overall schedule,” she said. “We’ve now got to a point where we believe we can keep that number working and working safely. We’re actually right now looking at our overall schedule as I speak.”

As for the Falcon Ethane pipeline, a two-leg system that will collect ethane from processing and fractionation facilities in Ohio, Pennsylvania and West Virginia, the last piece of pipe was laid on Sept. 10. Above-ground facilities are left to finish. The system will have the capacity to move 100,000 b/d of ethane to the cracker under supply deals with about 10 Appalachian producers.

The facility is designed to produce 1.5 million metric tons per year (mmty) of ethylene and 1.6 mmty of polyethylene, which are key building blocks for plastics. About 70% of the North American marketplace for polyethylene is within a 700-mile radius of the site along the Ohio River, according to Shell.