Domestic oil production jumped back to the 2022 peak level as OPEC and its allies affirmed plans to slash production through the end of the year as fallout from Russia’s war in Ukraine and China’s pandemic woes continued to roil global markets. 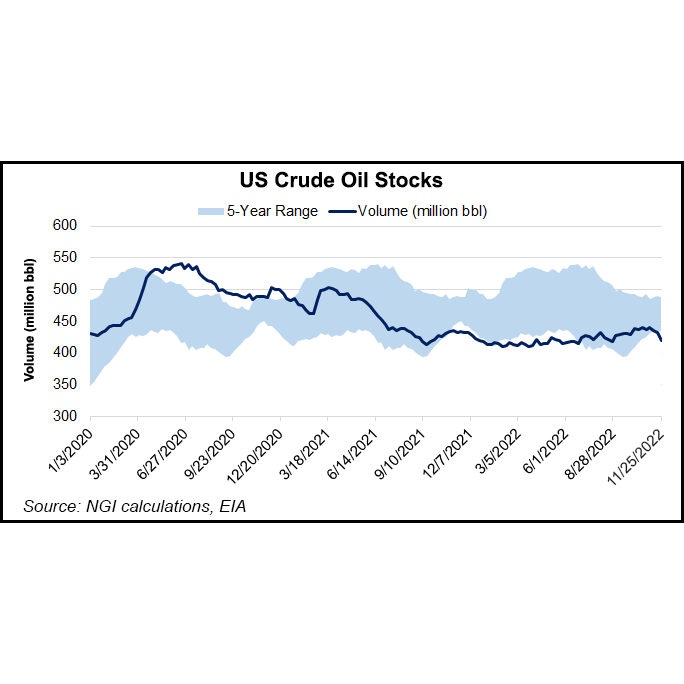 Domestic production, while still well below the 13.1 million b/d record level reached in early 2020 prior to widespread coronavirus outbreaks, has consistently held above 12.0 million b/d through the fall and above year-earlier levels.

American E&Ps are trying to strike a balance between solid but choppy global supply needs and political pressure to invest more in renewable energy to mitigate climate change. Production is relatively strong in the second half of the year in part because of a need to offset supply losses elsewhere.

Russia’s oil output, already lower because of sanctions against the Kremlin after its February invasion of Ukraine, could decline further as the European Union’s (EU) ban on Kremlin-backed seaborne imports took effect Monday. An EU and Group of Seven price cap on Russian crude — $60/bbl – took effect the same day.

What’s more, Saudi Arabia-led OPEC and its allies led by Russia, aka OPEC-plus, agreed this week to maintain a program to cut collective production by up to 2.0 million b/d. The cartel launched the effort in November and agreed to continue it through the end of 2022, citing demand uncertainty.

OPEC still expects consumption growth for full-year 2022 and again next year, though it said in a November report that it expects demand to ease from earlier estimates. It pointed to lofty inflation and slowing economic growth in the United States and Europe, Russia’s war and repeated pandemic-related lockdowns in China.

“It was always likely for” OPEC-plus to maintain its production cut to “see how demand is shaped in the medium term first before changing their stance,” said Joshua Raymond, director of investment platform XTB Limited. The EU ban and price cap on Russian oil also create “a lot of uncertainty over what it could mean for markets.”

“It could also be expected that some buyers of Russian crude might take a cautious approach in the first few weeks, reducing imports until the legal implications of such trade are clearer,” they said.

“How key exporters react will also have a knock-on effect,” the Rystad analysts added. “The general view among OPEC countries is that the price cap idea sets a bad precedent and could be implemented against that group in the future. Therefore, we believe OPEC will try to take an even more hawkish attitude in the coming months to defend prices.”

The result: Added pressure on U.S. producers to bolster activity, given the continued expectations for demand growth overall this year and next.

Total domestic consumption of petroleum products last week ticked down 0.5% from the prior week, led lower by a seasonal decline in jet fuel demand. Still, demand is up notably from the depths of the pandemic and supplies are under pressure.

U.S. commercial crude inventories for last week, excluding those in the Strategic Petroleum Reserve, decreased by 5.2 million bbl from the previous week. At 413.9 million bbl, stocks were 9% below the five-year average.