U.S. exploration and production (E&P) companies kept output for the week ended Nov. 18 at 12.1 million b/d, even with the prior week and generally on par with the level maintained through the fall, according to the Energy Information Administration (EIA). 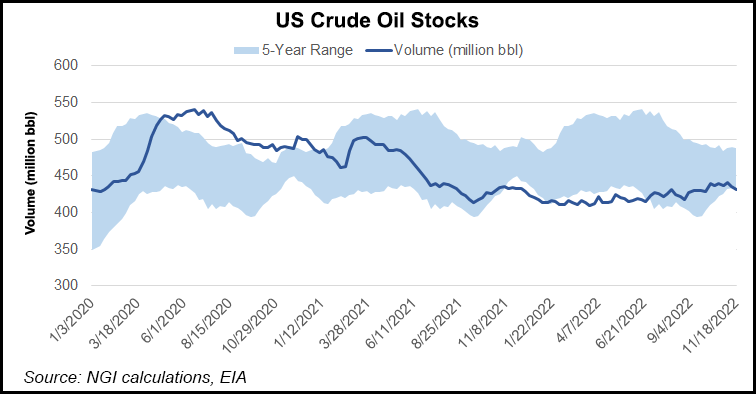 E&Ps raised production to a pandemic-era high of 12.2 million b/d at points in the summer but have scaled back modestly as demand has leveled off amid stubbornly high inflation and slowing economic activity in recent months.

Additionally, global demand, while also off of summer highs, is holding strong relative to supplies, due in part to limits on Russia’s oil output from sanctions against the Kremlin after its February invasion of Ukraine. What’s more, Saudi Arabia-led OPEC and its allies led by Russia, aka OPEC-plus, this month launched a program to cut collective production by up to 2.0 million b/d.

Global supply trailed demand much of this year, inflating crude prices and galvanizing political pressure from President Biden and others in Washington to call for increased domestic production even as demand is uneven.

In its monthly oil market report for November, OPEC lowered its forecast for global oil demand growth this year by 100,000 b/d to 2.5 million b/d. It downgraded its 2023 growth outlook by the same amount to 2.2 million b/d. Researchers pointed to expectations for U.S. and European economic growth to slow amid inflation and rising interest rates. They also noted pandemic-related travel and business restrictions in China.

Nevertheless, the OPEC analysts do still expect notable growth through the end of this year and across 2023, and this could further pressure already tight supplies, Matousek noted.

U.S. commercial crude inventories for the Nov. 18 period, excluding those in the Strategic Petroleum Reserve, decreased by 3.7 million bbl from the previous week. At 431.7 million bbl, domestic oil inventories are about 5% below the five-year average, EIA said.

International benchmark Brent crude prices hovered close to $82/bbl Monday, down from summer highs above $120 but still up about 4% from the start of the year.