Natural gas futures soared higher Tuesday as traders attempted to close the massive gap between the front of the curve and the winter contracts. Despite little change in the fundamental backdrop, the September Nymex futures contract jumped 7.8 cents day/day to settle at $2.417. October climbed 8.0 cents to $2.556. 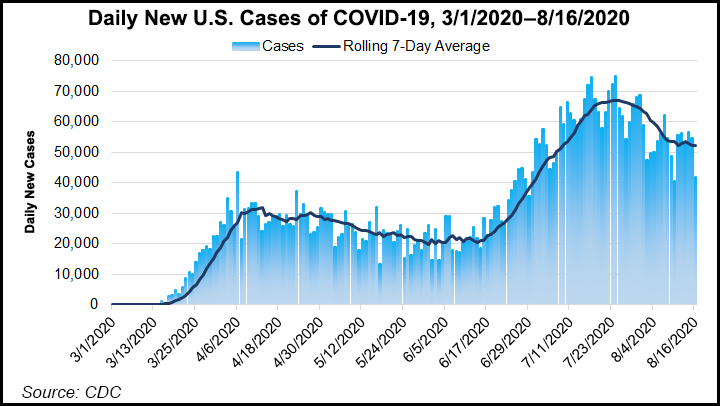 August has brought a renewed sense of excitement into the natural gas markets. For months, prices have been mostly range bound despite the extensive headwinds brought on by unusually high storage levels and then exacerbated by Covid-19 and the oil market downturn. After months of economic turmoil and dismal coronavirus case updates, analysts are cautiously optimistic the worst is behind them.

The unemployment rate fell to around 10% in July, the third month in a row in which it declined, according to the U.S. Bureau of Labor Statistics. The agency noted that notable job gains occurred in leisure/hospitality, government, retail trade, professional/business services, other services and health care.

Meanwhile, the number of confirmed U.S. Covid-19 cases stood at more than 5.45 million as of Tuesday, with 170,824 deaths, according to Johns Hopkins University’s Coronavirus Resource Center. Data showed that most U.S. states are seeing a decline in new cases, though several Northeast states, excluding New York, are seeing increasing cases.

Though far from being out of the woods when it comes to Covid-19, global gas demand also has shown signs of recovery, This trend appears to have grabbed traders’ attention most in recent days. Feed gas deliveries to U.S. liquefied natural gas (LNG) facilities have stabilized above 4 Bcf/d, and NGI data showed that Tuesday’s volumes came in at around 4.6 Bcf/d. While this is slightly lower than Monday’s levels, recent strength in Title Transfer Facility gas benchmark prices because of shrinking European surpluses has led to expectations that U.S. gas exports may increase substantially in the months ahead.

Energy Aspects analysts are maintaining their forecast that feed gas would grow by 0.9 Bcf/d month/month to 4.3 Bcf/d in August as a result of the reduced cancellations. The trend for August LNG cargo cancellations is in line with the firm’s view that the month would likely see fewer rejected cargoes than July’s 55 but more than the high end of initial market reports of 45.

To date in August, U.S. terminals in total are loading at a rate of one cargo per day, but Energy Aspects analysts have reason to believe the pace may accelerate. The firm noted that Freeport LNG intake averaged only 50 MMcf/d in July, including three weeks where the facility took in no gas. However, Freeport had averaged 0.4 Bcf/d in feed gas to date in August and had equaled July’s total loadings.

Cheniere Energy Inc.’s Corpus Christi facility also is registering higher feed gas this month. At its current 45% utilization rate, it may load three cargoes in the last half of August. It loaded only one cargo in July and one in the first half of this month.

The recent LNG trends are somewhat reassuring, and insight into October loadings may hit the market this week. However, the U.S. gas market still has some major headwinds to get through ahead of the winter. Though even fewer LNG cancellations are expected in the months ahead, summer heat is expected to soon fade, preceding a period of lighter demand ahead of the winter that stands to swell storage stocks even further.

The latest weather models remained at odds over the amount of heat expected for the remainder of August and into early September. The primary difference, according to NatGasWeather, is the Global Forecast System, which is holding onto stronger cool shots across the Midwest and Northeast next week through early September. Highs in those regions may continue to reach the comfortable 70s to 80s most days from Chicago to New York City. Regardless of the model, though, the firm said the supply/demand balance needs to tighten further if hefty surpluses of 443 Bcf are to be reduced.

“Sure, the latest GFS added a few cooling degree days…but time is rapidly running out on extreme heat to arrive across the Midwest and Northeast,” NatGasWeather said.

Without sufficient heat to drive cooling demand, storage containment risk remains on the table, with inventories already sitting more than 600 Bcf above last year and nearly 450 Bcf above the five-year average, according to the Energy Information Administration.

However, as Bespoke Weather Services noted, the current La Niña pattern should correlate with hotter patterns late in the summer. The month of September has tended to be hot in recent years, “no matter what the El Niño/Southern Oscillation state suggests.”

The issue is how high prices can go without loosening the market enough to increase containment risks, according to Bespoke. For reference, the Nymex winter strip (November-March) stood Tuesday at $3.110.

“The bullish case for winter is an obvious one, but if LNG does not meet lofty expectations, that bullish backdrop is completely separate from the front of the curve,” Bespoke said.

Power conservation efforts paid off in a big way in California on Monday, with the state’s electric grid operator avoiding rotating blackouts.

The California Independent System Operator continued to call for statewide conservation through Wednesday. The “record-breaking persistent heat wave has put extraordinary strain” on the electric system, it said. However, forecasts showed a gradual weakening in the coming days of the strong mid/upper-level ridge of high pressure that is responsible for the unbearable western heat.

Upstream in the Permian Basin, cash prices were on the rise across the region, though gains were smaller along the El Paso Natural Gas system following a fire Tuesday morning in Midland, TX.

Kinder Morgan Inc. spokesperson Lexey Long said the company isolated the impacted line segment, mobilized resources and is working with local emergency responders following the “release of natural gas and a fire” on the EPNG system. The fire is out and there are no injuries, according to Long, and an investigation into the cause of the release is to be conducted. The company is working with customers on any impacts to service.