Shell Offshore Inc. on Monday pulled the trigger to develop Whale, its 12th deepwater host in the Gulf of Mexico (GOM), which could see peak production of 100,000 boe/d. 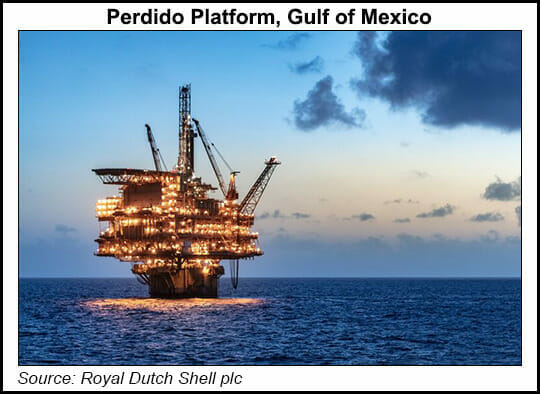 The Alaminos Canyon field in Block 773, about 200 miles southwest of Houston, was discovered in 2017. The Royal Dutch Shell plc subsidiary operates the field with a 60% interest; Chevron U.S.A. Inc. has a 40% stake. Ramp-up is set for 2024.

“Whale is the latest demonstration of our focus on simplification, replication and capital projects with shorter cycle times to drive greater value from our advantaged positions,” said Shell Upstream director Wael Sawan. “We are building on more than 40 years of deepwater expertise to deliver competitive projects that yield high-margin barrels so that we are able to meet the energy demands of today while generating the cash required to help fund the development of the energy of the future.”

Considered to be of the biggest strikes in a decade, Whale holds at least 490 million boe of oil and gas. The field is adjacent to the Shell-operated Silvertip field and about 10 miles from the Perdido platform.

Whale’s design is to replicate 99% of Vito’s hull and 80% of the topsides. The development is to be the second Shell-operated GOM development to employ a simplified, cost-efficient host design. Using that approach, Shell expects to achieve an internal rate of return of more than 25%.

“Our Whale development will feature energy-efficient gas turbines and compression systems,” management said. The “development will be the latest addition to our Gulf of Mexico portfolio where our production is among the lowest greenhouse gas (GHG) intensity in the world for producing oil.”

The reference to GOM production having among the lowest GHG intensity is a comparison with other members of the International Association of Oil & Gas Producers, Shell noted.