Chevron Corp.’s hot streak in the deepwater Gulf of Mexico (GOM) continues after striking oil and gas pay at the Ballymore prospect in Mississippi Canyon. Separately, Shell Offshore Inc. claimed a Whale of a discovery in Alaminos Canyon, which it said is one of the largest in the past 10 years. 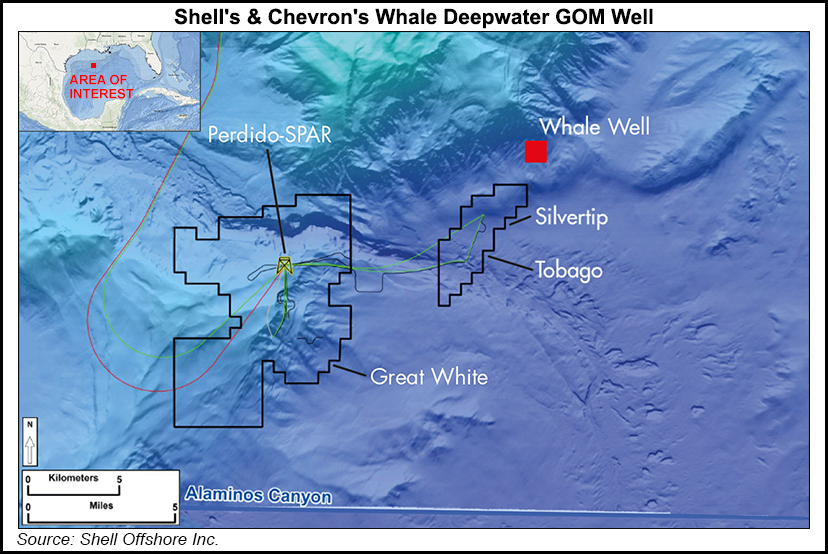 “Deepwater is an important growth priority as we reshape Shell into a world-class investment case,” said Shell’s upstream director Andy Brown. The Whale discovery “shows how, through exploration, we are sustaining a strong pipeline of discoveries and future projects to sustain this deepwater growth.”

Drilling operations for the Whale well were completed last June to a total measured depth of about 22,948 feet. The Whale is about 200 miles southwest of Houston in 8,000 feet of water. Whale, operated by Shell (60%) and co-owned by Chevron U.S.A. Inc. (40%), is in Alaminos Canyon Block 772, adjacent to the Shell-operated Silvertip field and about 10 miles from the Shell-operated Perdido platform.

“Whale builds on Shell’s successful, nearly 40-year history in the deep waters of the Gulf of Mexico and is particularly special in that it offers a combination of materiality, scope and proximity to existing infrastructure,” said Shell’s Marc Gerrits, executive vice president of exploration. “The result is another opportunity to think differently about ways we can competitively develop deepwater resources.”

The discovery in a “Shell heartland” adds to its Paleogene exploration success in the Perdido area. Through exploration, Shell has added more than 1 billion boe of GOM resources in the last decade.

Shell has three deepwater projects in the GOM under construction — Appomattox, Kaikias and Coulomb Phase 2 — as well as investment options for additional subsea tiebacks and a potential new hub, Vito. The Shell group expects its global deepwater production to exceed 900,000 boe/d from already discovered, established areas.

Chevron meanwhile announced a discovery at its Ballymore prospect, which shares the name of a town in Ireland. Ballymore is in water 6,536 feet deep about three miles from Chevron’s Blind Faith platform. The initial well reached total measured depth of 29,194 feet and encountered more than 670 feet net oil pay. A sidetrack well is underway to further assess the discovery and begin to define development options.

“The Gulf of Mexico deepwater is an integral part of our company’s long-term strategy,” said Chevron’s Jeff Shellebarger, president of the North American exploration and production (E&P) arm. “This discovery is an important addition to our portfolio, especially with its combination of size, quality and proximity to existing infrastructure.”

Total since last year has taken big steps to build its GOM holdings.

Earlier this month the French supermajor extended its GOM partnership with Chevron after buying Samson Offshore Anchor LLC. Samson holds a 12.5% interest in four Green Canyon (GC) blocks covering Chevron’s Anchor field, which is about 140 miles offshore Louisiana in waters 5,183 feet. The Samson deal also included a 12.5% interest in the GC block 761, where Total already had a one-quarter interest.

Last fall Total bought into seven of Chevron’s deepwater exploration prospects covering 16 blocks in the Wilcox trend in the Central GOM and the Norphlet prospect in the eastern GOM. Wilcox is adjacent to Anchor, and Norphlet in the eastern GOM is near Shell’s Appomattox discovery.

Total last summer also built its deepwater inventory, and its stakes in Chevron prospects, after agreeing to pay $7.45 billion for the exploration arm of shipping giant A.P. Moller-Maersk.

The Maersk deal handed it stakes in Chevron-operated prospects in the Lower Tertiary Trend, including a half-interest in the Cascade facility and a 25% stake in the Jack and St. Malo projects.