West Delta LNG LLC, an affiliate of Houston-based LNG 21, has applied for federal authorizations to build, own and operate a fixed-platform deepwater port in the Gulf of Mexico (GOM) offshore Louisiana and onshore facilities to export liquefied natural gas (LNG). 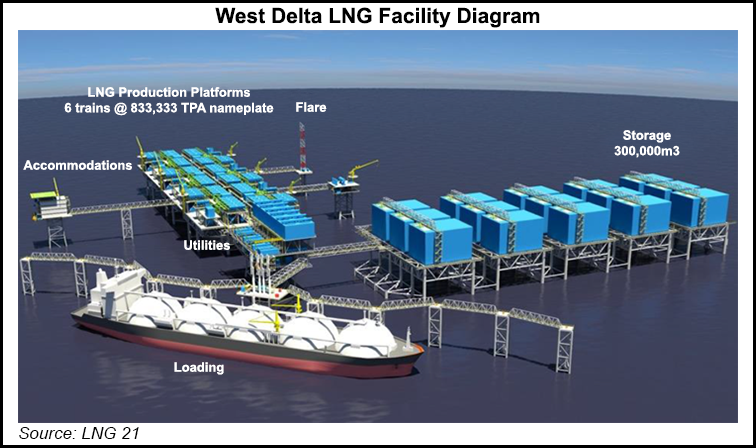 According to a Federal Register notification published Thursday by the Maritime Administration (MARAD) and the U.S. Coast Guard, the deepwater port and marine components would include an LNG production and storage unit, a loading platform/marine berth unit and support facilities. Onshore components would include the proposed Venice Pretreatment Plan in Plaquemines Parish, LA, within the grounds of the existing Venice Gas Complex.

The LNG production and storage unit would contain a gas arrival platform where liquefaction-ready gas would be supplied by the Venice Pretreatment Plant and a proposed 30-inch diameter subsea pipeline that would terminate at the platform.

The production platform would include three LNG production platforms capable of accommodating a total of six liquefaction trains, each with a nameplate capacity of .833 million metric tons/year (mmty) with the potential of up to 1.02 mmty each, providing total optimal capacity of 6.1mmty of LNG, according to the company. Aluminum storage tanks at the facility would be capable of holding 300,000 cubic meters of gas for off-loading to LNG carriers.

The Venice Pretreatment Plan would receive natural gas from GOM midstream pipelines and interstate pipeline feed gas from pipelines already interconnected with the Venice Gas Complex, according to the filing. The gas would be pre-treated and compressed onshore and sent to the offshore deepwater port.

In the nominal case, the pretreatment plant would process about 750 million standard cubic feet per day (MMscf/d) for the proposed deepwater port, which in turn would produce 5 mmty of LNG for export. In the optimized case, the project would process about 900 MMscf/d of feed natural gas to produce about 6.1 mmty of LNG — about 306 billion standard cubic feet/year.

At the western end of the state, Federal Energy Regulatory Commission staff on Friday issued a draft supplemental environmental impact statement (DSEIS) for a production capacity amendment for the Magnolia LNG project in nearby Calcasieu Parish [CP19-19].

The DSEIS comes days after the project’s developer announced a proposed agreement to sell a quarter of its capacity to Singapore’s Delta Offshore Energy Pte Ltd.