Researchers from Cleveland State University (CSU) said Ohio counties with significant Marcellus and Utica shale development have seen only a modest increase in job creation in 2012, but those same counties also saw a large increase in retail sales. 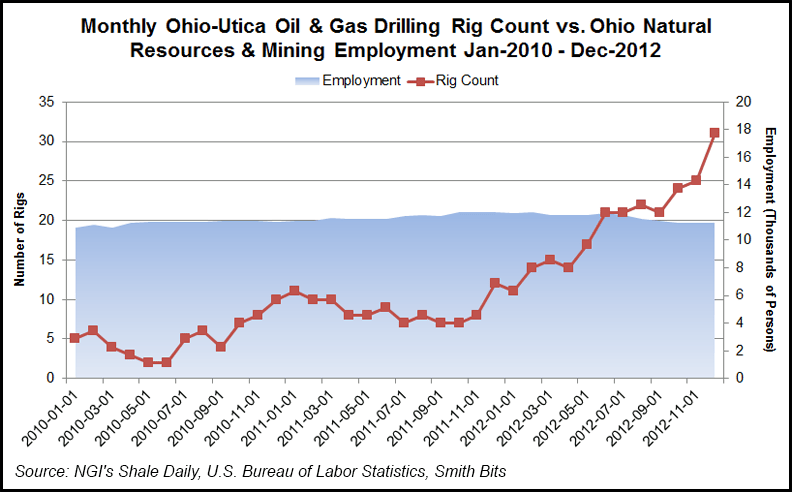 “At this point in time, employment growth in strong shale counties has not been faster than elsewhere in the state of Ohio,” the researchers for the Maxine Goodman Levin College of Urban Affairs said. “Significantly, much of the early positive sales activity is benefiting regions of Ohio that experienced severe disinvestment over the last 50 years.

“Employment growth associated with exploration and early stage production may have been captured by out-of-state workers that already possessed the necessary skills and training.”

The researchers said that since the first phase of shale development took place in Pennsylvania, a majority of energy companies were opening offices and creating associated jobs there. But they said that trend was shifting to Ohio.

“Employment growth should accompany the increased scale and scope of shale activities in the coming years,” the researchers said. “Recent signs of a strong office real estate market in Canton are early positive indicators. Furthermore, with the leadership of local institutions, including Stark State College and their expanded education and training programs related to oil and gas industry, there are greater potential for long-term employment gains to be captured by Ohio workers.

“While the full-extent of the long-term growth potential for shale and gas in Ohio is still being analyzed, the early evidence appears promising.”

“In mid-to-late 2011, the strong shale counties…began to experience a positive growth trend in terms of estimated sales receipts,” the researchers said. “This trend continued and strengthened through 2012…strong shale counties not only reversed negative average sales trends from the previous three years, but also outperformed the moderate, weak and non-shale counties.”

Job creation from shale development has been a contentious issue in Ohio.

The OOGEEP study — conducted by Cleveland-based economic research firm Kleinhenz & Associates Inc. with assistance from OSU, MC, Central Ohio Technical College and Zane State College — had predicted that there would be 200,000 jobs created in the Utica Shale by 2015 (see Shale Daily, Sept. 23, 2011).

NGI’s Shale Daily also took a look at the last few years of U.S. Bureau of Labor Statistics data covering Ohio’s natural resources and mining employment, as well as SmithBits drilling rig data. The results were similar to those of the CSU report. In January 2010, there were 10,900 people employed in Ohio’s natural resources and mining sector while there were only five rigs drilling for oil and gas in the Ohio-Utica. In December, the number of rigs ballooned to 31, but employment in the sector only inched higher to 11,200.