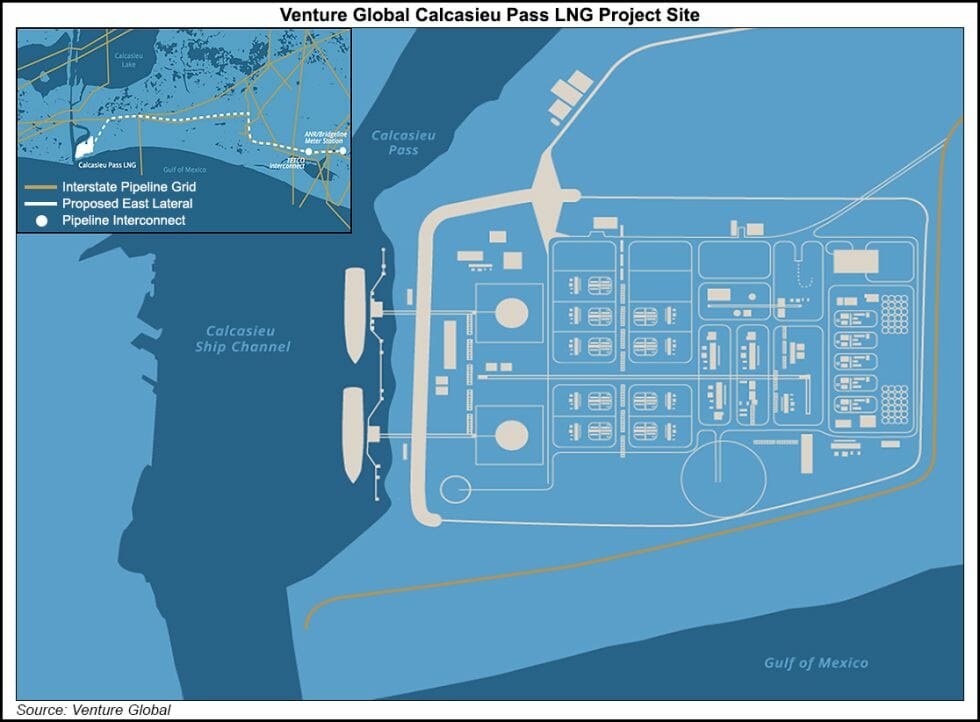 The Arlington, VA-based company said it will increase the capacity of its Calcasieu Pass and Plaquemines LNG facilities and expansion projects to 60 million tons/year (mmty) of production. At the same time, It has increased the size of its 2016 process equipment supply agreement with Baker Hughes, a GE company (BHGE), to 60 million metric tons/year (mmty), under which BHGE will deliver “a comprehensive technology solution” for Venture Global’s LNG export facilities.

The agreement provides for the guaranteed supply of highly efficient and reliable modular liquefaction trains plus power generation and electrical distribution equipment that will be standardized across the company’s Calcasieu Pass and Plaquemines projects as well as any expansion projects.

“With this expanded 60 mmty commitment from BHGE, we can grow our business to meet the increasing demand for our low-cost LNG from our international customers,” Venture Global Co-CEOs Bob Pender and Mike Sabel said.

After a volatile year in which crude oil prices ended the year lower than where they started, BHGE management noted during the company’s 4Q2018 earnings call that LNG was the one area that was growing. BHGE estimates that longer term, LNG capacity could reach about 550 mmty, with an estimated 5% compound annual growth rate “from now until 2030, driven by power generation and consumption in some of the emerging markets…India, China.”

Project sanctioning is difficult to determine, but it is “accelerating faster than we anticipated,” management said. The company now sees an opportunity for considerably more LNG projects reaching final investment decision (FID) in 2019.

The fully contracted Calcasieu Pass LNG project, originally designed as a 10 mmty facility, received approval from the U.S. Department of Energy earlier this month to export domestically produced LNG to countries that do not have free trade agreements (FTA) with the United States. Under the long-term order, the facility is authorized to export 1.7 Bcf/d (620 Bcf/year) to non-FTA countries from the proposed facility for 25 years.

As originally designed, the export facility, to be built on a 930-acre site in Cameron Parish, would include two 200,000 cubic meter LNG storage tanks; two LNG berthing docks, designed to handle carriers of 120,000-210,000 cubic meter cargo capacity; and a 1,500-foot by 3,000-foot turning basin adjacent to the Calcasieu River Ship Channel. All would be built and operated by Venture Global Calcasieu Pass LLC, a subsidiary of Venture Global LNG.

Meanwhile, the 20 mmty Plaquemines LNG project is expected to receive its final FERC authorization in August and commence construction in 2019, with FID expected later this year. It executed its first binding 20-year offtake agreement with PGNiG.

As originally designed, the Plaquemines LNG project is planned to feature 20 liquefaction blocks developed in two phases, with each block having a nameplate capacity of 1 mmty. It would also contain four 200,000-cubic-meter LNG above-ground storage tanks with cryogenic pipeline connections to the liquefaction plant and berthing docks.

“We believe our model of mid-scale modular liquefaction is the future of low-cost LNG production,” the company chiefs said.

The facility is expected to include up to three marine loading berths capable of receiving oceangoing LNG carriers up to 185,000 cubic meters in capacity. It would also include a utility dock on the Mississippi River to handle waterborne deliveries of equipment and material during both construction and project operations. A combined-cycle gas turbine power plant with generating capacity of 720 MW also is to be developed; another similar plant is to be added in a second phase.

The proposed Gator Express facilities would be constructed in two phases and in the first phase include a 16-mile, 42-inch diameter pipeline and appurtenant facilities, to deliver gas to the LNG project from new interconnections with Tennessee Gas Pipeline Co. LLC and Texas Eastern Transmission LP offshore, southwest of the terminal site. In the second phase, a looped section of 11-mile, 42-inch diameter pipeline and appurtenant facilities would deliver additional supplies to the terminal from the interconnection with Texas Eastern Transmission.

Each phase would be designed to deliver about 1.97 million Dth/d.