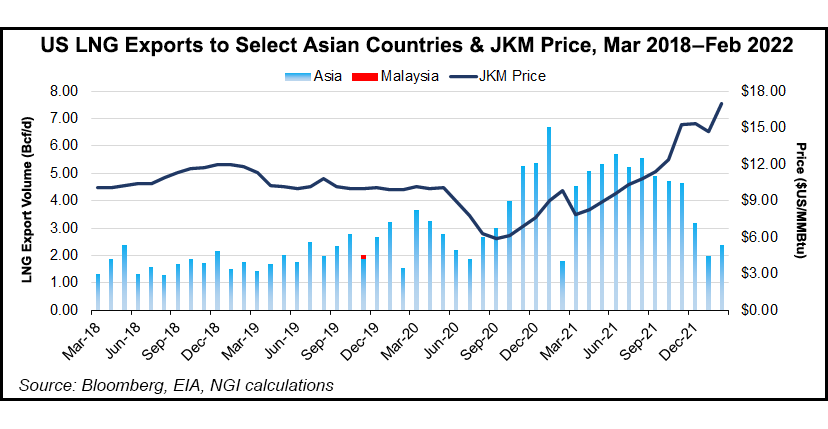 A 1 million metric ton/year (mmty) 20-year contract was announced Wednesday with a subsidiary of Malaysia’s state-owned Petroliam Nasional Berhad, aka Petronas. The contract could lift contracted offtake at the project proposed just south of New Orleans to 16 mmty of a 20 mmty nameplate capacity.

The contract with Petronas LNG Ltd. is a first with the company, which Venture Global CEO Mike Sabel said creates a “significant expansion” of its customer base in Asia.

On Tuesday, the company announced a combined 2 mmty in agreements with ExxonMobil’s Asian LNG trading arm, 1 mmty of which will come from Plaquemines. Venture also locked in a combined 4 mmty in 20-year agreements with China Petroleum & Chemical Corp. for the Louisiana project.

Venture has said publicly that it could soon sanction Plaquemines. It has awarded engineering and procurement contracts and given notices to proceed.

The company has inked several new deals this year as geopolitical impacts to the global LNG market continue to boost proposed U.S. infrastructure.

In a recent study, Enverus reported that 19 mmty of capacity from North American projects has been snapped up since Russia invaded Ukraine in February. More than 80% of those volumes were secured in March.

Enverus’ Al Salazar, senior vice president of intelligence research, said the future prospects of U.S. projects adding capacity in the near term is limited, which “changes the outlook significantly for the next tier of projects, and less commercially advanced projects likely benefit the most from the current market environment.”

Plaquemines, along with the third phase of Cheniere Energy Inc.’s Corpus Christi LNG and the Woodfibre LNG project in Canada, are expected to add 32.6 mmty in North American export capacity by 2025, according to Enverus.